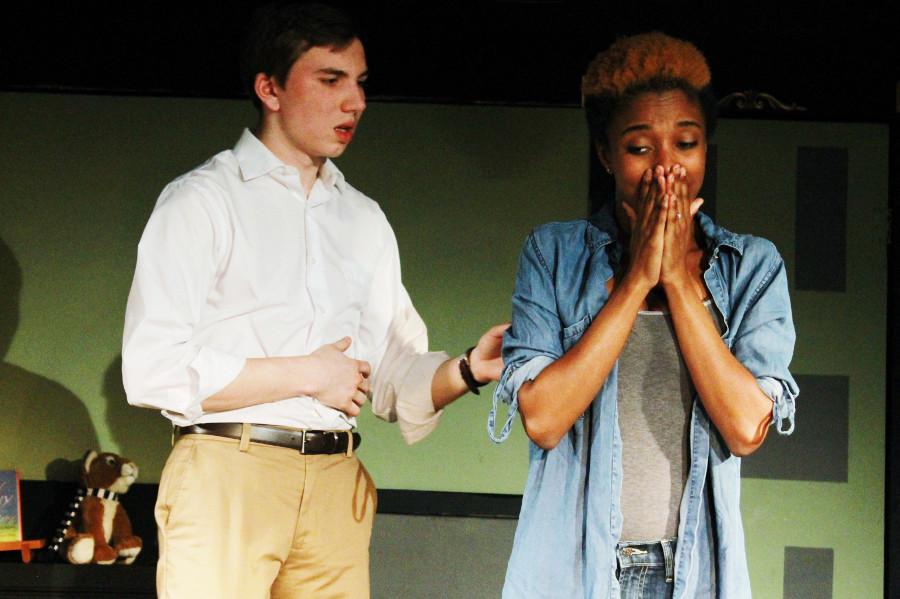 Students directed and performed in this emotional play about loss and forgiveness.

“Parents shouldn’t have to bury their children,” goes the old cliché. The Pulitzer Prize-winning drama “Rabbit Hole,” which follows a family after the death of a child, doesn’t abuse this cliché, and it doesn’t need to, instead relying on the audience’s ability to read between the lines.

As the story develops, each character grieves for Danny in a different way. Becca, who gave up her job to become a stay-at-home mom and sees Danny everywhere she looks, blames herself. Howie, who wants to move on but cannot let go, blames the driver of the car that killed Danny, Jason Willette (second-year student Eddy Zhang). Nat, who spends a whole scene discussing the Kennedy curse, believes God is in control. And Izzy, Becca’s foil in every way, pushes Becca to consider how her grieving is affecting her loved ones.

The show excels in its emotional moments because of the investment the actors put into character development. Each actor does a good job of becoming their character, enhancing the play’s believability, but Matthews and Thompson stand out for the nuance they added to Becca and Howie.

According to Mottern, Matthews “really pushed all the other actors to go further into their characters” than usual. The audience members, many of whom knew the actors outside of their theater production, only see the characters on stage.

The depth of character can be found in the multiple instances when Becca teases Izzy, creating a visible sister bond, and other scenes with Howie constantly rubbing his wedding ring. The fully formed characters create emotion with just their actions in scenes with few to no words, such as when a weak and nostalgic Howie watches an old VHS tape of Danny or when a shaking and sobbing Becca reads a letter that Jason wrote to them. Those scenes would have little impact on the audience if the characters were underdeveloped, ruining the effect of the play.

The chemistry between all the actors is excellent due to their intense time investment, but the main couple really stands out. Matthews and Thompson play well off of each other, using the others’ movement and voice to influence their own movement and voice. Their arguing appears almost choreographed.

Thompson attributes the chemistry to the work they put into developing the characters’ relationship. He explained that one day they were “coming back from rehearsal” and “talking about what was their life like before” the actions of the play. The hard work pays off throughout the play, particularly in the final scene, when the audience can see the couple realize that they have finally begun to move on from Danny’s death.

The one production element that ties the show together is the wonderful sound design by Christine Pisaniello, who also managed the stage and served as the food artist. The pre-show classical piano solo set the overall melancholy tone of the play. Other soft piano solos in between and during scenes punctuate the production’s tone as well. The best example would be when Becca reads Jason’s letter. The piano adds to Zhang’s and Matthews’ shaking and sobbing to drive home the impact the letter has on Becca. Without the sound, the scene would have been fine, but it completes the scene and carries the impact over to the audience.

In my opinion, the purpose of any play is to create emotion in the audience. PTG’s most recent production does just that, leaving several audience members in tears afterward.