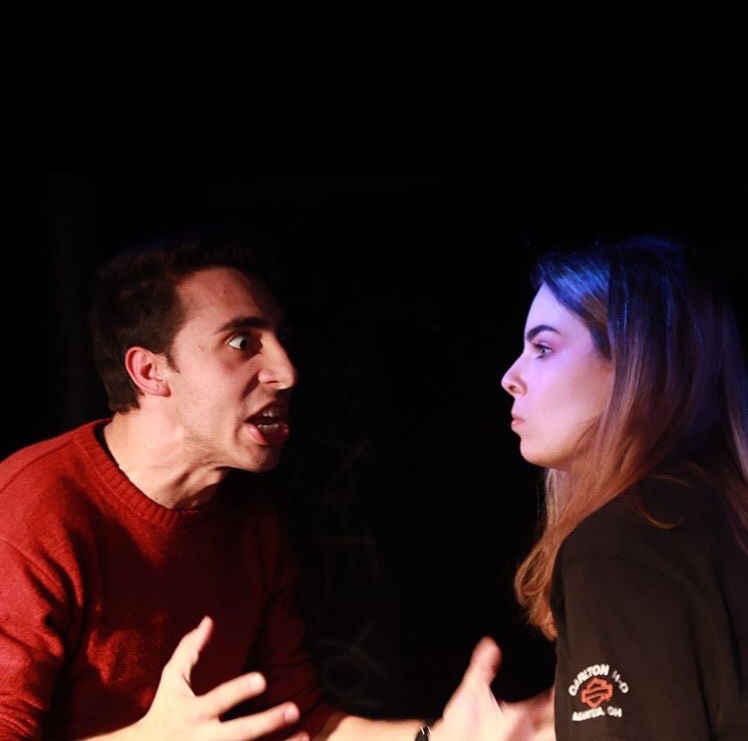 Natalie Perry and Richard Pannullo in a scene of "Revolt. She Said. Revolt Again."

Light and shadow cascaded over six college thespians in a struggle to change the perception of women in the new age last weekend, Nov. 8 and 9, at the Eldred Black Box Theater.

“Revolt. She Said. Revolt Again.” was an hour-long series of vignettes that left the audience in a stupor, switching from scene to scene and recycling actors to create an abundance of diverse characters.

“I picked the show because it would be a challenge,” said Conte after the closing night. “I wanted to show people eclectic, weirder things … it was a risk, I just wanted to jump into it.”

The performance was prefaced with a soundbite of a woman speaking about the importance of defeating the heteropatriarchy, a system that has oppressed women for centuries and now faces rightful extinction with the evolution of society. The tone of the show was “tired, exhausted [and] livid,” capturing the audience with images of the subjugation and self-empowerment of women in everyday life.

Moments of frustrated passion followed one after the other, forcing the audience to reflect as they listened. At times, the drama got so hectic, it felt like a fever dream. Characters stormed around each other, screaming, “Who’s this man mowing the lawn? His feet are bleeding!” Audience members did not know whether to laugh or cringe.

“I’m honored to be in this show because of how misbehaved and thought-provoking it is,” said Perry, a fourth-year student who had only done two other productions with PTG.

Coury, a fourth-year theater major and president of the PTG was a leader for the group, having convinced Perry to join the troop just a year ago. Well known in the Case Wastern Reserve University theater department for her acting, Coury accomplished one of the greatest feats of acting this past weekend: subtlety. For both nights, she was imperceptibly debilitated by illness, but true to tradition, the show went on, and she matched the grace of her peers.

“I wish I had been healthy enough to let it rip,” said Coury, “but I just trusted my cast and let the adrenaline carry me.”

The black box setting was perfectly suited for the exhibition. The entrance is a short descent from the ground level on the Case Quad, which steeps you into the shape-shifting atmosphere. The setting was minimalist, with black wood cubes and a foldable table decorated to look like a fancy dinner being the extent of prop usage.

The lights and sound added tremendously to the effect, confusing and re-orienting the audience in sequence with the transition of acts. The cast used this mixture to their benefit, bringing the focus to their intricate body language and pungent dialogue.

“You’d never see something like this in the theater department,” said Case, a fourth-year theater major. “The Players’ Theatre Group is awesome … with student design, directing and all the other artists on campus, it was better than with faculty.”