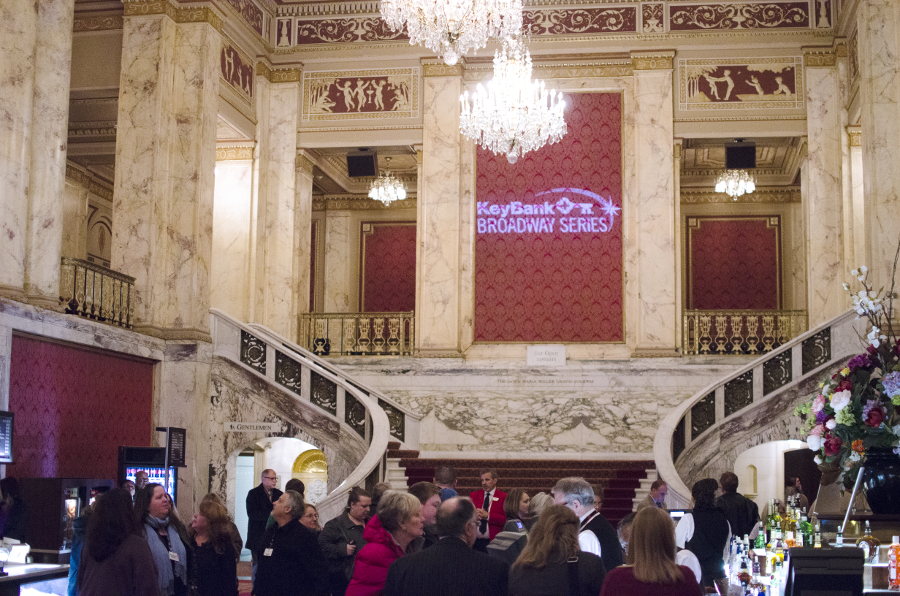 This year’s Annual Broadway Season Launch Party focused on bringing back some youthfulness to the season with not only its show, but also its lineup of plays for the 2015-2016 season.

Like in many Cleveland programs, there was a focus on reinventing the city and bringing people downtown, as reflected by President and CEO of Playhouse Square Art Falco’s speech. He began the show by introducing the vision he had for the theaters at Playhouse Square. This included renovations for some of the theaters, as some have them have not been renovated for over 30 years. He cited recent renovations to the Ohio Theatre as an example.

In keeping with the theme of engaging with a younger audience, Falco also discussed introducing more children’s shows to the district to attract the younger audience and their families. Another end goal was to bring more pre-Broadway shows.

“Producers around the country look at Cleveland as a market with a really strong fanbase,” said David Greene, the director of programming.

Greene is hoping to introduce pre-Broadway shows to the Cleveland audience over the next couple of years.

The modernizing aspect of the future of Playhouse Square was also reflected in the launch show. There were several attempts to connect with the younger audience with a twitter hashtag of “BWYinCle,” which was displayed before the show began with a rotating display of tweets and Instagram pictures that people in the audience shared. Speakers also encouraged the audience to tweet about the event on their “Tweeter accounts” and the host of the evening, Playhouse Square executive producer Gina Vernaci, also led a group tweet.

After all the speakers presented, the show began with a performance from “The Lakewood Project,” a rock orchestra from Lakewood High School. The young musicians were excited to perform on such a beautiful stage, and the audience simply loved their show.

The event’s target audience were the 32,000 season ticket holders who filled the theater. According to Vernaci, this was the highest amount of season ticket holders for any off-Broadway location. The crowd consisted of mostly middle-aged to older Caucasian viewers. Judging by the whoops and claps, they were definitely excited for the direction Playhouse Square was going and were even more excited with the lineup.

First up will be “Bullets Over Broadway,” written by Woody Allen and directed and choreographed by Susan Stroman (of “The Producers”). Infused with Allen’s signature style of humor, the musical is set in the 1920s and tells the story of a young playwright who tries to make it big and ends up being financed by a mobster. The musical features pop and jazz tunes and as Vernaci noted, it is essentially a “musical version of Allen’s films.” The musical is set to run from Oct. 6-18, 2015.

Up next, running from Nov. 3-15, is the 2014 Tony Winner for Best Musical, “A Gentleman’s Guide to Love and Murder.” The musical was described as a combination of “Sweeney Todd: The Demon Barber of Fleet Street,” “Monty Python” and “Downton Abbey” and is also set in the early 20th century. In this witty musical, the main character, Monty Navarro, finds that he is ninth in line for an earldom with eight pesky relatives (all played by the same actor) who are in his way. As you can guess from the title, there’s really only one solution to this problem.

The first musical of 2016 is the more modern “If/Then” which will run from Feb. 9-21. It is told from the perspective of a 40-year-old woman, Elizabeth, whose marriage has ended. She finds herself debating whether she should follow Cupid or her career path. This introspective musical explores a series of “what if?” questions, as Elizabeth tries to figure out in what direction her life is going. Directed by Michael Greif, who also directed “Rent,” this show promises an exciting soundtrack with a couple of pop-rock ballads.

Following “If/Then” is the smash hit “Beautiful: The Carole King Musical,” which was nominated for seven Tony Awards. This musical tells the story of singer-songwriter Carole King, who first started in the industry at the young age of 16. The introduction of this musical also featured a brief performance from Meggie Cansler, who sings “(You Make Me Feel Like) A Natural Woman.” Several people in the audience sang along softly and it seemed that this musical will feature a foot-tapping soundtrack. “Beautiful: The Carole King Musical” will run from April 5-17.

“Matilda the Musical” comes to Cleveland next from May 3-22, after a successful run on West End and Broadway. It has won seven Olivier Awards and five Tony Awards, including “Best Book of a Musical.” The production will feature a rather unique set composed of letter blocks and a younger cast, which the directors hope will attract families and younger crowd. Greene hopes that the musical will also attract college students who grew up with the book that the musical is based on.

“Steel Magnolias” will follow “Matilda the Musical” from May 21- Aug. 21 and will bring a new sense of Southern charm into town. Not much has been revealed about this production, but the classic promises to throw it back to a time of big hair.

Closing off the season is the highly popular Sir Andrew Lloyd Webber period piece, “The Phantom of the Opera.” The announcement of this show, running from June 15-July 10, received the loudest cheers from the audience. The show has been produced here in Playhouse Square several times since its 1986 West End opening. Greene noted that it has always been a crowd pleaser, and he’s excited to see how the audience will react to this recent production. It promises to be opulent at the very least, with 18 trailer trucks carrying set pieces, lighting, costumes and more for the production.

The show ended shortly after with a closing number from Cansler and The Lakewood Project, which reflected this upcoming year’s lineup of old and new, traditional and modern. The variety of the shows offered this upcoming season also showed that the directors were interested in attracting larger and newer audiences, from classics like “Phantom of the Opera” to traditional Broadway glitz in “Bullets Over Broadway,” to the family-friendly favorite, “Matilda,” the dark humor of “A Gentleman’s Guide to Love and Murder,” to the nostalgia of “Steel Magnolias,” the jukebox and foot-tapping “Beautiful: The Carole King Musical” and finally to the modern production of “If/Then.” Tickets are on sale for all seven shows and Playhouse Square’s Smart Seats gives balcony seats to all of these productions for the price of $10.