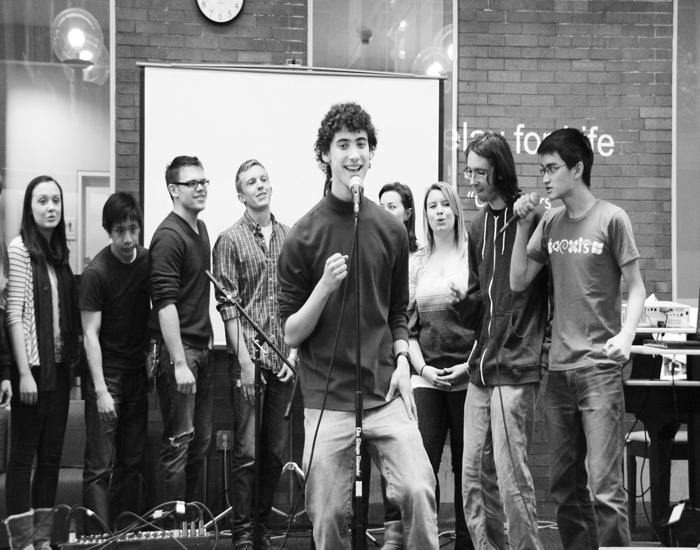 “Relay For Life isn’t just a one-weekend event in April, it’s a year-long movement,” said senior Tricia McCutchan at last Friday’s Power of Purple rally for Relay For Life (RFL). Power of Purple, which was held in the Thwing atrium from 12:30 to 2 p.m., was meant to energize the campus in anticipation of RFL’s big weekend in April.

As RFL’s only major spring publicity event, Power of Purple is the group’s greatest opportunity to collect donations. Tables lined the perimeter of the atrium, offering T-shirts, luminaria sales, and raffle tickets for the Share the Vision students vs. faculty basketball game, which took place later that night. As of Wednesday night, CWRU RFL has raised $8137, an increase of $3480 from two weeks ago. Its goal is to surpass $75,000 by RFL’s conclusion on April 22.

The highlight of the afternoon was honorary chair Dr. Amy Wilson-Delfosse’s keynote address. It revolved around caregivers, which is the American Cancer Society’s theme for this year’s RFL events across the country.

“I was lucky. I made it into my forties before my family was touched by this horrible disease,” she began. But in recent years, she has been forced to learn how to be an effective caregiver. Her education began with a bad example. When her husband was diagnosed with cancer five years ago, the doctor saddled her with the responsibility of telling him. He gave her the diagnosis, turned around, and walked away. She said this harsh introduction to the journey of cancer treatment motivated her to be a great caregiver.

While Dr. Wilson-Delfosse’s husband is in much better shape now, her close friend Jenny was not as lucky. Diagnosed in early 2010, Jenny passed away less than a year later. Before she died, however, she taught Dr. Wilson-Delfosse important things about being a caregiver.

Dr. Wilson-Defosse said that in the early stages of Jenny’s treatment, a mutual friend of theirs was unsure what her role was supposed to be. Despite having her feelings hurt a few times, she eventually realized that the disease was entirely Jenny’s and that she had to learn to adapt to the different ways in which she was needed.

“Try to live every day as a normal, before-cancer day,” she said in describing the best approach to caring for loved ones battling cancer.