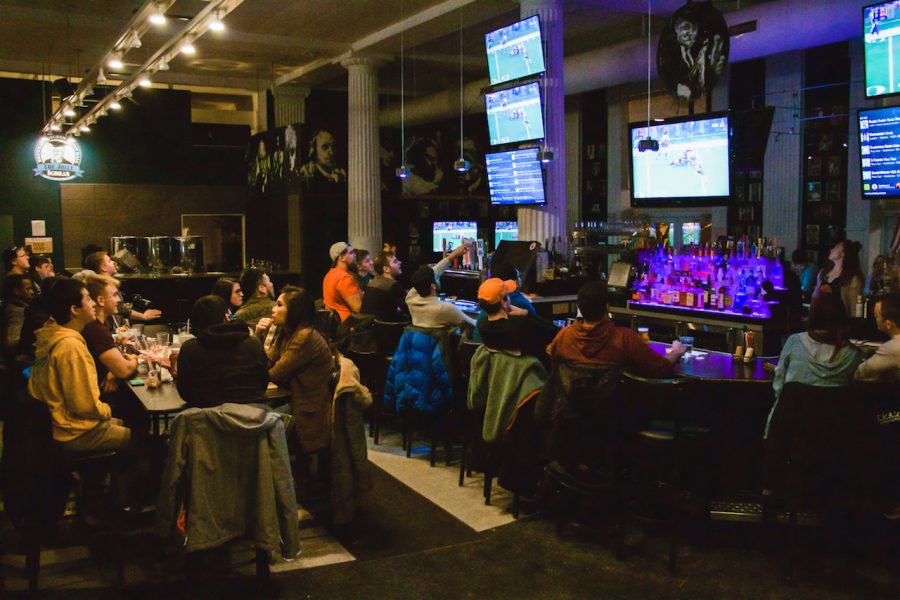 Students gather last year at the Jolly Scholar to watch the Super Bowl.

The New England Patriots and Philadelphia Eagles face off in Minneapolis, Minnesota for the Super Bowl on Feb. 4. The Patriots are four-to-five point favorites, according to Las Vegas sportsbooks, but the Eagles have won their past two games as underdogs. The sports team discusses the likelihood of an Eagles upset, the New England dynasty and the previous rounds. The conversation below has been lightly edited.

Eddie Kerekes, Director of Web & Multimedia: Who will win the Super Bowl and why? If you are a Patriots fan, how are you feeling heading into this game? Same question for hypothetical Eagles fans.

Jacob Rayyan, Staff Reporter: While I am not a Patriots fan, I am a big fan of Tom Brady. Why? Because he’s a winner. Some people in life just win at everything, and Brady is one of those people. The Patriots are too talented not to come up with a sizable win here. Brady and Head Coach Bill Belichick have all the tools to win yet another Super Bowl even without Julian Edelman and possibly Rob Gronkowski. The Eagles will probably put up a fight in the first half, but once the Patriots make the necessary halftime adjustments, it will be another casual Patriots victory, solidifying Brady’s Greatest of All Time (GOAT) status in the NFL and as one of the greatest athletes in the history of American sports.

Kerekes: The Patriots have been upset by lesser teams before. Well, it was really the New York Giants, but still. Vegas gives the Patriots a 4.5 point edge. What percent chance do you guys think the Eagles have?

Shounak Bose, Web Editor: Having grown up a short drive away from Gillette Stadium and watching the Patriots dominate the NFL since I was four, I have complete confidence and know exactly what to expect. Jacob was spot-on when he said the Eagles will keep it close at first, and maybe even lead at the half, but as always, the Patriots will come back. Brady wants to solidify himself as the GOAT, and given that he’s not up against the Giants or anyone with the last name Manning, this should be an easy victory.

I’ll give the Eagles a 20 percent chance, although it would have been higher if they didn’t lose Carson Wentz. I am excited for their future once Wentz comes back.

Andrew Ford, Staff Reporter: The Eagles have been overlooked throughout these playoffs in every game. Yes, they lost their quarterback, but Nick Foles has looked good. If the Jacksonville Jaguars had a better offense, they had a legitimate shot at beating the Patriots in the AFC Championship Game. The Eagles are the Jaguars but with a better offense, so I think they have closer to a 40-45 percent chance at pulling the upset most of America wants to see.

Furthermore, if anyone was going to beat the Patriots, it was going to be the Jaguars. Their defense matched up perfectly against the Patriot offense. The Eagles might be more capable offensively, but defensively they won’t be able to handle Brady as well as the Jaguars did for three quarters. If any of you were able to watch the game, Brady probably had less than six inches of a window to hit his receivers throughout the first half. It was smothering. I don’t think the Eagles have the talent on the defensive side of the football to compete like the Jaguars did.

Sanjay Annigeri, Staff Reporter: In terms of what we may see on the field, the Patriots are currently the favorites to win. The Eagles would have a better shot of winning if they had Wentz. However, with Foles playing at a much higher level than he did in the regular season and currently third among playoff quarterbacks in QBR, I think the Eagles may have a legitimate shot to upset the Patriots. The Jaguars set a good model for the Eagles to use, but the Eagles just need more offensive intensity to win—I think they are up to the challenge. In terms of looking at who America wants to win (as both of these teams have long been hated), the Eagles can be seen as the favorite. Can the Eagles pull the upset? Just a few days until the result will be known.