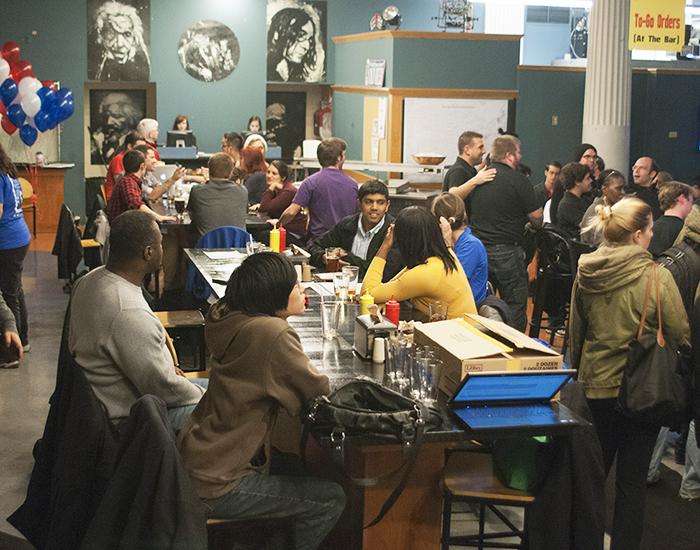 “When the news networks projected Obama the winner of the election around 11:15, I, as well as the rest of the room, was overwhelmed with a sense of excitement and joy, but also a sense of relief,” said Dwayne Coleman, the public relations chair for the Case Democrats. “We had been working so hard for the past months and it was great to see that it all paid off.”

At the end of Tuesday night, Obama had won a total of 303 electoral votes, while Mitt Romney had taken 206. A key part of Obama’s win was, as it usually is, the state of Ohio.

“Ohio was critical in the election,” said Brylan May, a member of Case Democrats. “This was evident by the fact that both candidates have visited repeatedly in the past few months. Ohio is always a battleground state and is always critical in determining who will run this country.”

As it turned out, when President Obama was announced the winner of Ohio’s 18 electoral votes, he also surpassed the total of 270 required to win the presidency.

While the Case Democrats celebrated at the Jolly Scholar, the Case College Republicans watched the results come in at the Cuyahoga County Republican Party’s election night watch party in Independence, Ohio.

“The results of any important or influential moment for the nation results in a certain amount of uncertainty for the future,” said Erin Law, the public relations director for the Case Republicans. “After this election, never before has this uncertainty seemed so great that it caused me great anxiety for our future.”

In this election, both campus political groups played a large role on campus. They each put up booths, registered voters, participated in a debate against each other as well as the Young Americans for Liberty, and overall tried “to make sure that the campus population was informed on the issues so that they could make an informed choice,” as Coleman said.

Case Western Reserve University was not the only college which held several political events this election season; colleges across the nation tried to improve their campuses’ political awareness in an attempt to increase voter turnout.

However, the Case Democrats believed students and voters were paying even more attention to economics in this election. The Case Republicans disagreed.

“I’m a little disappointed in America,” said Sam Lehnecker, a member of the Case Republicans. “I’m definitely not against the LGBT community and, in fact, I support it whole-heartedly. I just think that this election turned into one on social issues when, in reality, America needs a better economy.”

“Republicans are hopeful that Obama will find some way to find a solution to our economy that avoids the horrible situation in which Europe now finds itself,” said Case Republican treasurer Janis Cava.

This election season was one of many ups and downs for both political parties as various news programs discussed the “winners” of each debate.

“Overall, I think election season was great. There was a lot of good discussion and it really brought some attention to the problems our country is facing,” said Kassie Stewart, the media correspondent for the Case Democrats. “There were some defining moments for the media, like the sound clips from debates and the leaked video of Romney, but I don’t think these single occurrences were make-or-break moments.”

“I believe that Barack Obama was the best candidate in this election because of where he stands and who he is,” said Coleman. “He is a man of conviction who means what he says and who deeply cares about all of us.”

“His balanced approach to economics and his longing for all Americans to be considered equal is what this country needs. And the fact that he wants to do all of this in the spirit of compromise is what we believe is going to move America forward.”

In the end, both political parties need to remember, as Stewart said, that the elections don’t just happen every four years and that the votes people cast every general and primary election are important and have a major impact, as well.

“We need to be thinking about the direction our country is going all the time, not just every four years,” said May. “Politics are important; the government and the country are always changing no matter who is in office.”