President Snyder responds to racist statements made against #webelonghere movement 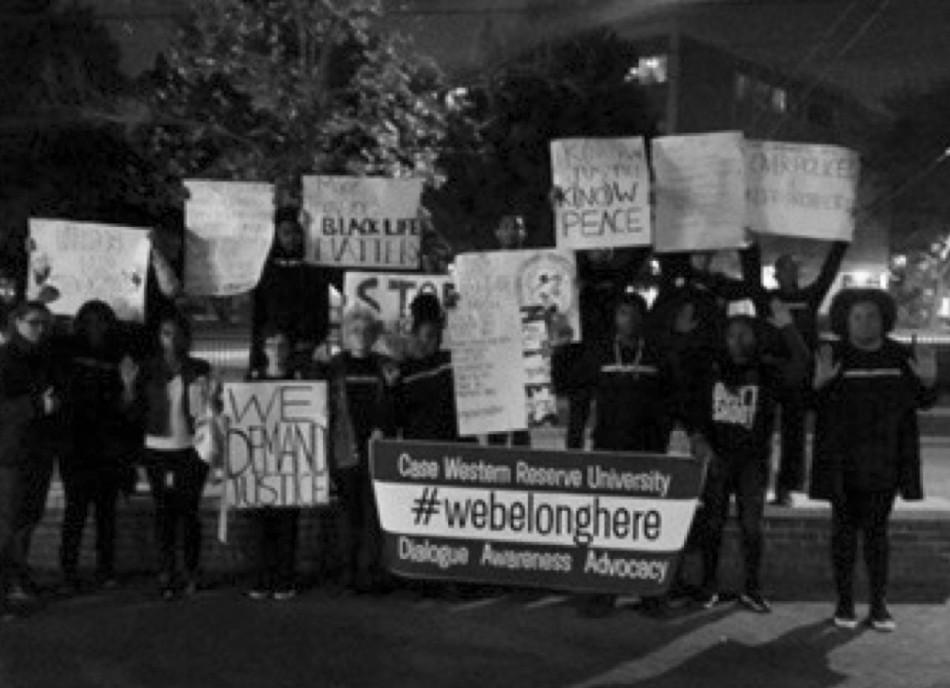 Students protest as part of the #webelonghere movement outside of Leutner on Oct. 22.

On Oct. 22, twenty-five students gathered outside of Leutner to protest for racial equality on Case Western Reserve University’s campus. They walked throughout campus, carrying signs and chanting as they travelled through the North Residential Village. Using their student IDs, the students also went into Wade Commons and the Kelvin Smith Library, where they walked in a silent, single-file line.

The next day, university President Barbara Snyder sent out a campus wide email regarding the student response to the protest, which included racist comments made on the anonymous social media app Yik Yak.

“I write today to ask that you join me in condemning social media comments made last night about some of our students,” read the email.

The students, part of the #webelonghere movement, were joining the National Day of Protest against police brutality. The protest, held at 10:30 p.m., recognized the midnight protests held in St. Louis, Missouri following the fatal shooting of Michael Brown in Ferguson.

The #webelonghere movement was organized by the Case Western Reserve University African American Society (AfroAm), but it includes students from various underrepresented minority groups on campus. The movement aims to promote positive racial dialogue on campus through events including a race relations forum held on Sept. 28 and flash monologues held throughout campus in the week following.

“We wanted to show our solidarity with everyone on this day of protest,” said Destinee Henton, president of AfroAm. “It was civil disobedience.”

Comments started showing up on Yik Yak almost immediately after the protest started, with many people commenting on how the protesters were disturbing their studying or sleep. However, some took it further, with one poster saying “I hope the police beat the living shit of the people protesting outside NRV right now, it’ll be well deserved,” and another poster saying “DON’T MISS OUT! Rudyard Kipling’s ‘The Jungle Book’ is being performed by actual animals, including monkeys on North Side!!”

Henton was extremely concerned by the comments, which she took screenshots of and posted to her Instagram account. Henton said that she had family members contacting her to see if she was safe. She decided to send her screenshots onto Snyder, who had met with Henton multiple times before to discuss facilitating the goals of the movement.

Snyder’s email condemned the racially charged comments, saying that they did not fit in with CWRU’s core values of inclusiveness and diversity.

“The email that she sent out was extremely great,” said Henton. “That’s reflective of who President Snyder is.”

The email also referenced plans for diversity training and the continuation of sustained dialogue, a program which brings students together to discuss issues that are important to them, and to put them in touch with administrators in order to facilitate actual change.

Despite the negative response on Yik Yak, Henton feels that most of the response to the movement has been positive.

The movement plans to continue to meet with Snyder and other administrators, and is also organizing future events, including a CWRU booth at a community Halloween party and a trick-or-treat table near Wade Park, to foster deeper relationships with the local community and promote diversity and inclusion more on our campus. They are also working with the Office of Inclusion, Diversity and Equal Opportunity to design diversity trainings, which should begin in the spring.

“Now people know about the movement,” said Henton. “They know that race is a problem. So what actions will be taken?”