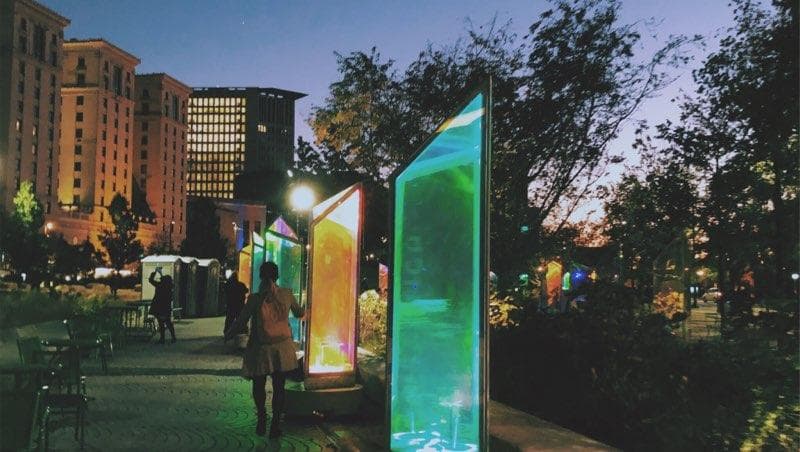 Prismatica ia a rotating exhibit featuring glass prisms that transmit every color in the visual spectrum.

“Prismatica is comprised of 25 pivoting prisms, each more than six feet tall, made of panels laminated with a diachronic film that transmits and reflects every color in the visible spectrum, varying with the position of the light source and the observer. The prisms are mounted on bases containing projectors.”—Cleveland Public Square.com

Prismatica was first presented as part of the fifth edition of Luminothérapie at the Place des Festivals in Montreal. After this, the moving exhibit has been to a number of destinations, including Chicago, France and Philadelphia, and was most recently displayed in downtown Cleveland from Oct. 18 to Nov. 15.

It was installed on the Key Bank Promenade around the Gund Foundation Green. Completely free and publicly displayed, Prismatica is part of a larger movement to make art both more widely accessible and more generally appreciated.

Public Square, the area downtown including Key Bank Promenade and the Gund Foundation Green, has been host to a number of public art installations due to initiatives in conjunction with LANDFORM Studio and the Fowler Family Foundation. The installation is intended to encourage residents to come out and enjoy the square even after sunset.

In its interactive nature, the Prismatica exhibit encourages visitors to come play with light, especially in the dark.

“I thought [the exhibit] was really beautiful and something that enlivened downtown Cleveland just a little bit more,” second-year student Katelyn Park said. “It was fun to see everyone else interacting with it too and the exhibit seemed to bring the community together.”

RAW Design, a Toronto-based architectural firm comprised of 30 architects and designers is the primary artist and designer of Prismatica. RAW works on a broad range of projects, from community greenhouses to large residential developments. It is a medium-sized design studio that aims to develop creative responses to design questions through a fluid, collaborative and open-minded approach to design.

In respect to Prismatica, RAW pulled together professionals from several different fields, including Dix au Carré, which handled sound design, ATOMIC3 and Jean-François Piché, who worked collaboratively on lighting design. ATOMIC3 also worked with Louis Héon on production and technical design. Additionally, ATOMIC3 contributed to the concept design and execution. The installation is owned by Quartier des Spectacles Partnership, from Montreal.