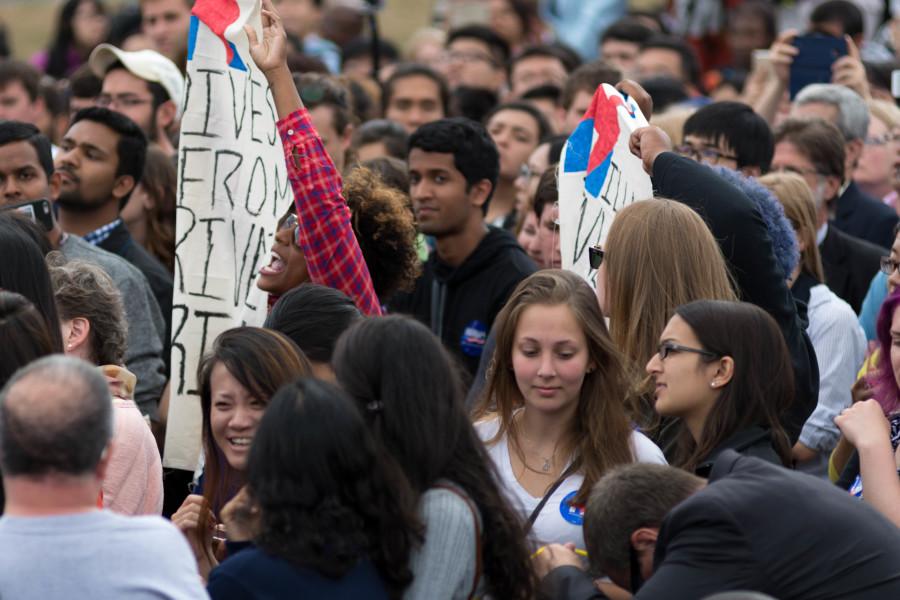 Aug. 27 brought not only Secretary Hillary Clinton to Case Western Reserve University’s campus, but also her detractors. In the midst of Clinton’s 30-minute speech about everything from childcare to gun violence to the economy, two protesters took issue with her reference to the Black Lives Matter movement.

They interrupted her reference to the national movement with shouts entreating her to “invest in black trans women now” and “divest from private prisons.”

The two protestors, Angela Peoples and Rian Brown, both identify as queer and were at the rally as representatives of GetEQUAL—a nonprofit organization that advocates for the LGBTQ community—as well as the Black Lives Matter network.

Peoples and Brown began their protest after Clinton spoke about the measures the United States as a nation should take to halt gun violence, briefly mentioning and mourning Tamir Rice, the 12-year-old who was shot to death by police in Cleveland last year.

Peoples and Brown didn’t necessarily have a problem with Clinton advocating for black lives—they had a problem with her inattention to the recent series of deaths of black transgender women.

Four transgender black women have been killed in Ohio in the past two years: Tiffany Edwards in Cincinnati, Cemia “CeCe” Dove in Olmsted Township and Brittany-Nicole Kidd-Stergis and Betty Skinner in Cleveland.

Bri Golec, a 22-year-old transgender woman, was stabbed to death in Akron, Ohio in February of this year. Nationally, her murder marked the sixth homicide of a transgender woman within the first six weeks of 2015.

Yet in the Human Rights Campaign Municipal Equality Index, which gives cities across the country “equality ratings” based on the laws they have protecting the rights of LGBTQ citizens, Cincinnati earned 100 percent. Cleveland was ranked at 79 percent, and Akron at 68 percent.

The deaths of these women have been given little coverage in local or national news media networks, and when their deaths were covered, they were often misgendered by the media—as Bri Golec and CeCe Dove were by Cleveland.com and The Plain Dealer and as Tiffany Edwards was by Cincinnati’s WKRC.

“When Hillary talks about standing up for women,” said Brown, “Who does she mean? Just cis [cisgender] women?”

Though Peoples and Brown were escorted by the police away from the stage and towards the outskirts of the crowd almost immediately after their protest, many students stayed around to hear what they had to say.

Secretary Clinton eventually halted briefly in her speech to address them directly, saying “I will certainly be happy to meet with you later, but I’m gonna keep talking.”

Her statement was met by approving laughter from the audience before she went back to criticizing Republicans.

“We do have to stand up and say loudly and clearly, black lives matter,” Clinton said. “[Tamir Rice] should be healthy. He should be alive.”

But to Peoples and Brown, what mattered is that Clinton didn’t mention Dove, Kidd-Stergis, Edwards or other transgender women of color murdered in recent years.

“Many of her donors are people who are also making money on the mass incarceration of black people and the mistreatment, especially, of black trans women in prisons,” Peoples said. “How can she say black lives matter and continue to take money for her campaign that’s fueled by the abuses in the criminal justice system?”