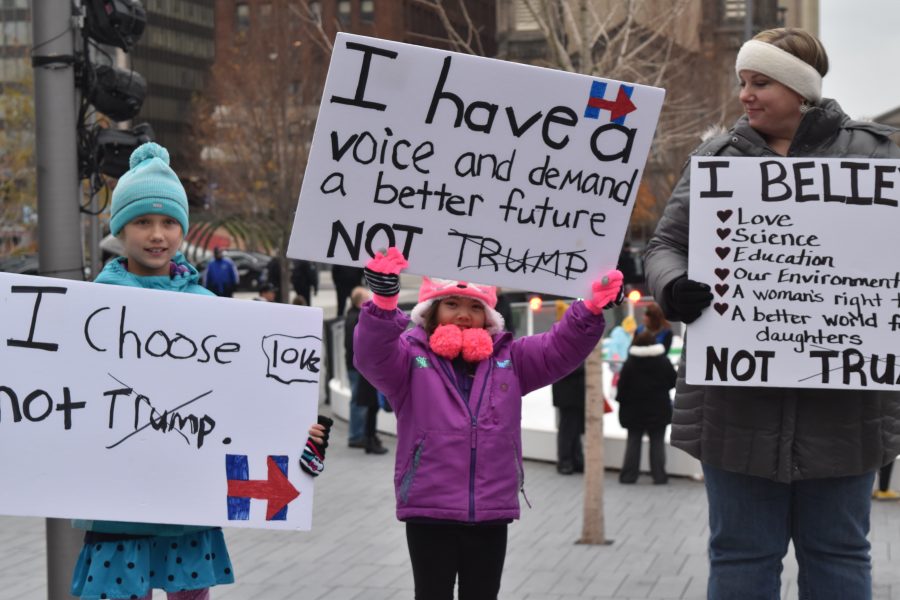 On Dec. 3, protestors rallied against President-elect Donald Trump in Public Square. CWRU students participated, voicing their opinions on this election and the future of the nation.

The afternoon of Dec. 3 was blustery, cold and a little rainy. Despite this, or perhaps in defiance of even the weather, dozens of people gathered in Public Square to protest the election of Donald Trump and an assortment of other political issues. Anarchist groups, environmental activists, anti-Dakota Access Pipeline (DAPL) marchers and a variety of individuals with overlapping but distinct agendas showed up that Saturday to utilize their First Amendment rights.

The only unified theme of Saturday’s protest was frustration; the organizers of the Facebook event that many protesters cited as their inspiration for attending were a no-show. Despite these absences, leaders of several other organizations decided to step in and project the message of their respective group towards the mass of protesters and families skating on the ice rink in Public Square.

One of these groups was the Revolution Communist Party of America, whose megaphone performance and subsequent interview with The Observer was focused around what they described as the coming “revolution,” in which “people will organize in the millions to actually defeat the system.” The interviewee, who declined to be named, continued to explain the group’s view that “Fascist America” was killing various minority groups, and that rebellion was the only acceptable path to safety.

Other groups were less overt in message and tactics. A mother with her two young daughters had banded together with friends to make signs and come out to promote their own vision of a more tolerant America. Regarding the concept of involving relatively young children in a protest environment that featured swearing and behaviors sometimes considered unfriendly to youth, she explained that this was her children’s first protest experience and that the girls were the ones interested in protesting because “what they’d heard on TV and seen in the news was the exact opposite from what they [had] been learning in school about bullying.”

There was a small group of Case Western Reserve University students in the crowd as well. First-year student Leo Ndiaye and fourth-year student John Turner made the trip downtown. Ndiaye even took the megaphone at one point, espousing the need for the United States to honor the Paris Agreement on climate change and to resist any attempt by Trump to take action that would worsen climate change. When asked why he attended the protest, Ndiaye said, “As students, we have a really big role to play in opposing Donald Trump.” He said that in resisting Trump, students were fulfilling their historical obligation to protest policies that a large portion of society cannot agree with.

Also in attendance were a small group of attorneys present to observe the protest. The lawyers claimed to be monitoring both the protesters and the police to ensure that no laws or constitutional rights were infringed upon. A large number of Cleveland police officers were also present, though they were unavailable for comment and their chosen representative was not physically present.

This has not been the first demonstration against Trump since the election, as the city saw hundreds of marchers protest Trump in mid-November as well. With the nation divided and Saturday’s protesters promising to continue their movement, Clevelanders’ fight against the president-elect shows no signs of abating.