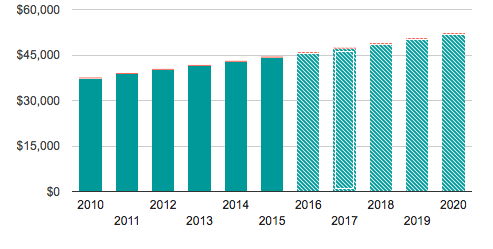 On Thursday, Feb. 9, Provost Bud Baeslack presented those gathered in Strosacker Auditorium with many of the details relating to the 3.25 percent tuition increase for Case Western Reserve University undergraduates for the 2017-18 school year. Baeslack went through a series of slides indicating the past breakdown of tuition increase relating expenditures, such as the operating costs of the Tinkham Veale University Center, and showing where some of the funds from the upcoming increase will be distributed.

Faculty salary increases, additional office of financial aid funds and unspecified organization operating expenses were all listed as future recipients of the nearly 6.892 million dollars expected to be raised from the tuition increase. CWRU is expected to devote roughly 55 percent of the tuition increase this year towards faculty salaries building operating costs, and varied administrative fees. The other 45 percent of the increase is expected to go the office of financial aid.

Second-year student Abhi Devathi, felt that the presentation “was pretty good with explaining why they’re increasing tuition and how that’s gonna help us.” Second-year student Jennifer Moose said that she attended after finding out that financial aid to her could be affected by whether she chose to live on or off campus.

After the presentation and an open question sessions, the Provost made himself available to students to discuss further concerns, such as how the increase in tuition would affect recipients of exclusively merit-aid based on students.

Students in need receive grants and other aid that are adjusted annually to reflect individual financial situations and the rising costs of attendance.

For those with merit-aid, however, this is not the case. Scholarship amounts are locked on for the duration of their effectiveness. For example, a student who receives the University Scholarship, which is worth around $12,750 per semester, will continue to receive that same $12,750 a semester for the duration of the scholarship regardless of increases in tuition or housing. This could trouble students and families who don’t qualify for need-based aid and weren’t counting on an increase in their annual tuition bill.

Baeslack  said that universities with flat tuition plans are unusual, and that those that do offer such plans “still must in their overall pricing for first year students meet requirements for higher costs associated particularly with annual faculty and staff salary increases.”

The provost pledged to work with the vice president to ensure that incoming students were more aware of the fact that tuition increases annually. He also stressed the university’s commitment to working with students to be more transparent, citing a flowchart requested by Undergraduate Student Government dictating the distribution of funds presented to the student body both by email and in the slideshow as an example.