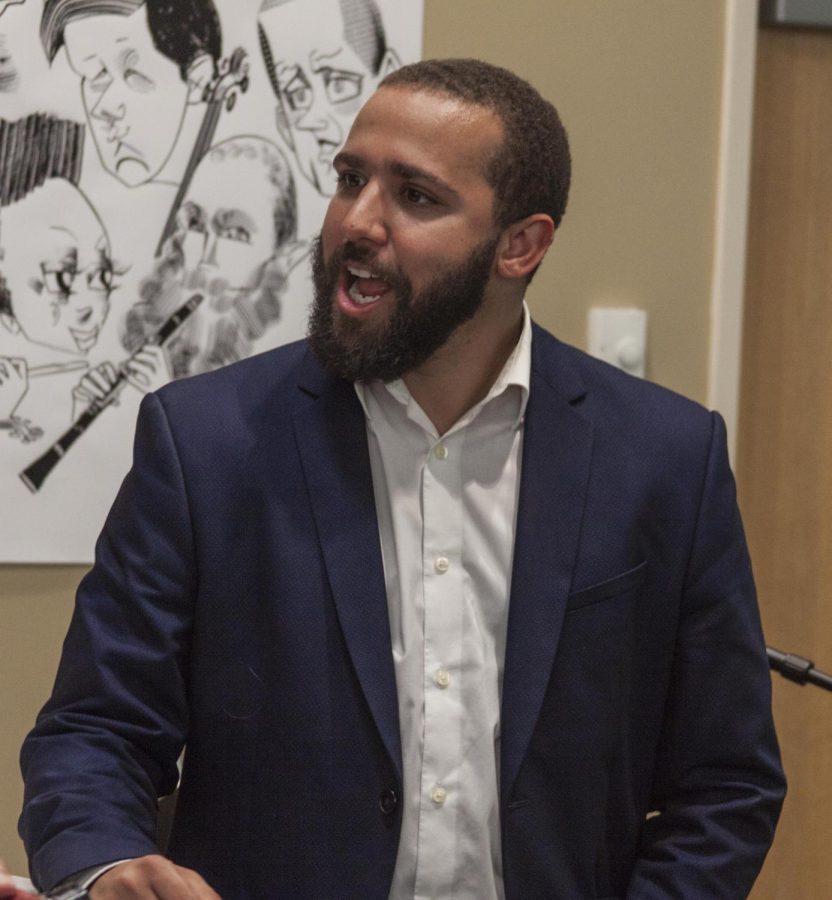 Pulitzer Prize-winning journalist Wesley Lowery, who was honored for his work on The Washington Post’s “Fatal Force” series, visited the Kelvin Smith Library last Friday to give a lecture on “The Crucial Role of Journalists in Society.” Following the talk, Lowery answered audience questions.

During his visit, Lowery spoke on the storytelling of people whose “stories might not otherwise be told” and how he helped create a database of police shootings, which his Washington Post series examined. During the Q&A, he recounted his own story of being arrested in Ferguson, Missouri.

Viral Mistry, a fourth-year student and current Vice Chair of the University Media Board, said, “I attended the [lecture] because I’ve been following [Lowery’s] work for a while now, most prominently the police shooting tracker he mentioned. When [I found out] about this event, I knew I had to go to see someone whose work I so greatly valued.”

Having started his career in journalism in middle school as “a way to befriend a girl,” Lowery admitted that his writing has evolved greatly over time. He recalled how he has matured as a journalist, stating, “The writers whom I most admire spend a lot of their time really listening, and I think one thing that’s helped me as a writer overtime is being able to more closely listen to what the people who I’m interviewing and talking to are saying.”

Lowery also spoke about his collegiate experience at Ohio University (OU)’s E.W. Scripps School of Journalism. He said he was engaged in covering student politics and skipping classes to hand out newspapers.

“[In college, I wanted to do] exactly what I’m doing right now for the most part,” he said, and felt that his experiences at OU “really prepared” him for the work he currently does.

During college, Lowery held an internship at a local Cleveland publication, The West Life, which reports on various communities in the west side of the city. He said this opportunity led him to The Columbus Dispatch, The Detroit News and eventually The Wall Street Journal. The journalist described such experiences as “building blocks” of his newspaper career.

Before working for The Wall Street Journal, Lowery worked at the Los Angeles Times and then The Boston Globe. After Lowery arrived in Boston in 2013 to work for The Globe, the Boston Marathon bombings occurred just one month later. The tragedy was closely followed by the murder of Odin Lloyd, the First Suffolk senate race and the Boston mayoral race, all which contributed to The Washington Post hiring Lowery as a Congress reporter.

Shortly after that, he was sent to report on the police shootings in Ferguson. His experiences there motivated his Pulitzer Prize-winning series.

He said the domino-effect of his coverage opportunities “wasn’t really a path that [was] planned out, but rather a story [which] led to the next story to the next story, and the stories have been a pretty good guide for my career so far.”

While Lowery is praised for his writing style, he is better known for the actual content and the approach of his articles, which he said he treats like a detective or investigator. The questions he asks himself when developing a story include, “What’s already been written about this? What’s the context I need to know? What’s the history I need to know? How do I build it out?”

As a college student, Mistry felt that hearing about Lowery’s career development was extremely valuable. He said, “I found the event to be fantastic, in large part because [Lowery] chose to spend close to half the time fielding questions from the audience. People asked him really thoughtful questions about his writing process and how he chooses what to write, and I think he did a great job highlighting the difficulties of writing thoughtful work for such a prestigious newspaper.”

Not only has Lowery’s writing style evolved over time but so have his topical interests. While he originally covered politics, he now primarily covers issues of law enforcement and justice.

Lowery discussed that evolution, explaining, “I think that the job I have now is not a job that four years ago I would’ve predicted. I didn’t quite know what I was going to be doing.”

As a result of his love for telling stories, Lowery has also written a bestselling book entitled, “They Can’t Kill Us All,” which is under development as a television series with AMC.

“The thing about a book is you’re not confined to traditional style or traditional space or traditional length,” Lowery said on the difference between books and articles. “You’ve got so much more time and so much more space. It allows you to, kind of, include all the B sides; all the little pieces of string inside interviews, inside details that maybe you couldn’t get into the newspaper that day.”

Shirley Wormser Professor of Journalism and Media Writing Jim Sheeler stressed the importance of holding onto the emotions which come with storytelling and of Lowery’s elaboration on that aspect of journalism during the lecture and Q&A.

Sheeler added, “I think it’s extremely important [to have speakers with diverse backgrounds on campus]. You only see through the eyes that you have, and you need, to be around people who have those different experiences in order to shape [your] own.”

Lowery also offered some advice to college students looking to go into the journalism field: “I think that the most important advice is that journalism, reporting, writing and interviewing are trades, they’re not academic fields. They’re things that, the more you do them the better you are at them, and because of that, you can begin your journalism career right now.”