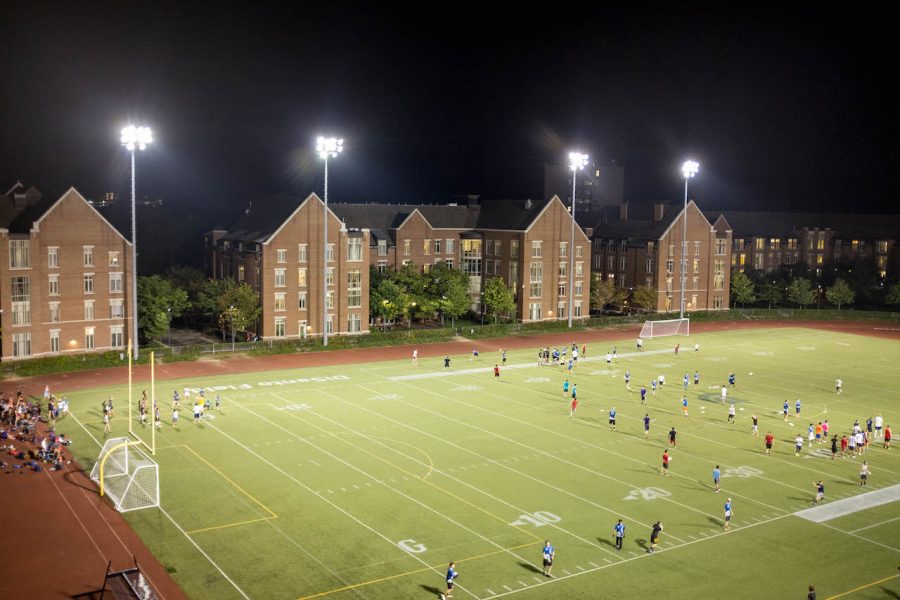 New additions to the intramural schedule for next school year include indoor curling, esports and innertube water polo.

You are gliding across the ice, crouched down on one knee and holding a circular stone. You need to time your release at the right moment so your stone can knock your opponent’s outside of the scoring circle while also staying on the circle itself. Your teammates will brush the ice upon the stone’s release as it travels the length of the court, trying to steer it in the correct direction.

Is that a description of a crazy Greek Week event or the Olympic sport of curling?

If you said Greek Week, then you are unfamiliar with the Canadian-dominated sport of curling. Two teams of four people attempt to place stones on a ringed target by sending them down the ice. Scoring is similar to Bocce ball, where the closest stones to the center earn points.

On Wednesday, March 29 the Case Western Reserve University Intramural and Club Sports staff released a draft schedule of their events for the upcoming year. Indoor curling was one of the events new to the calendar.

The CWRU version of curling will be not be played on ice and sweeping will not be allowed. The similarities to the sport it is based off of include similarly shaped stones and scoring. The school will be the first in the country to offer the modified form of the game.

Assistant Director for Intramural and Club Sports Daniel Conway said, “It’s basically a combination of shuffleboard and Bocce Ball…There’s a target on the mat and [each team] throw[s] four stones. We’re going to try it out and see how it goes.”

According to the draft schedule, an indoor curling tournament will be held on Friday, February 23 at a site to be determined.

Also added to the calendar is an esports tournament, tentatively scheduled for February 2.

Conway stated that the games of the tournaments have not been chosen, but they would not be traditional esports juggernauts like “League of Legends” or “Dota 2.”

He said, “It would be focused on sports,” providing the “FIFA,” “Madden NFL” and “NBA 2K” series as examples.

Conway stated the department was looking to expand its participation pool by offering esports.

“It’s a different market that we’re looking to attract,” he said. “We want to have something for everyone.”

The rest of next year’s schedule will be similar to this year’s with the subtraction of the poorly attended golf scramble. The full preliminary schedule can be found on this page. Students are encouraged to contact either Conway or Associate Athletic Director Pat Kennedy to comment on the proposal. Conway explained that the schedule will be finalized at the start of the summer after facilities have been properly reserved. He said student comments will be accepted for the rest of the school year.