Putting the gal in Galentine’s Day 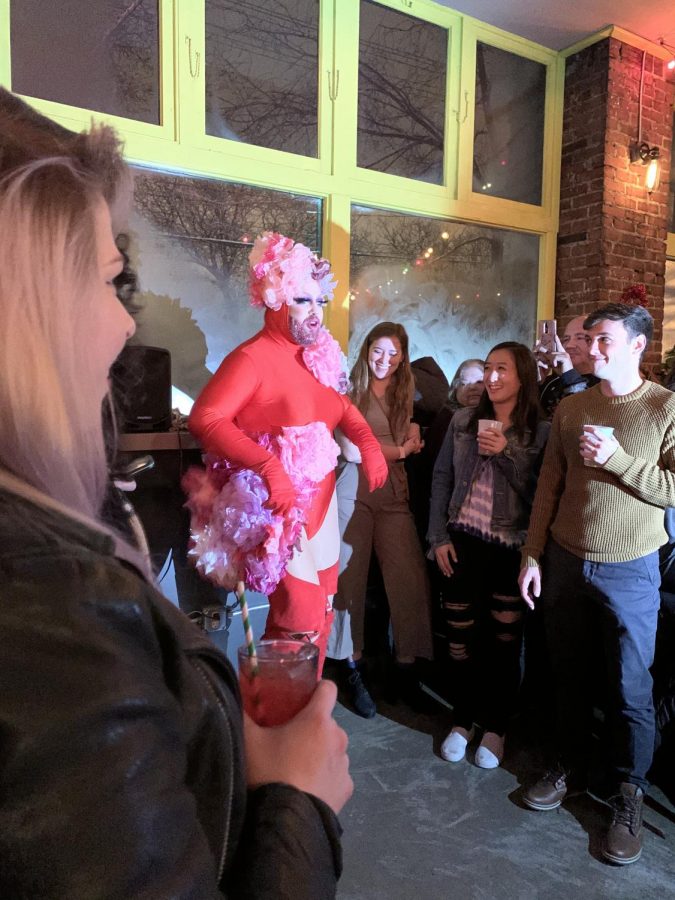 Cleveland is home to one of the most diverse drag scenes in the Midwest and, arguably, in the country.  It is not unusual to see queens from different types of drag—pageant, alternative, camp, androgynous, etc.—in the same show, as shown by Brewnuts’ Galentine’s Drag Show on Feb. 13.

For those unfamiliar with Galentine’s Day, it is a holiday created by fictional character Leslie Knope from the show “Parks and Recreation.” It is the day before Valentine’s Day, and is a day for, to quote Knope, “ladies celebrating ladies.” The concept is fun enough on its own, but the drag take on it gave it an amped up, campy, “screw gender” feel.

Brewnuts’ eclectic interior was decorated with heart garlands for the holiday, but was too small to host the mass of people there for the show; the line went out the door to order drinks and donuts. It was so packed that it was standing room only, and the queens had an area smaller than a Case Western Reserve University dorm room to perform.

The all-ages, free show evidently was appealing enough to draw people out on a bitterly cold Thursday night. While most of the crowd was young adults, there were also middle school-aged girls and older women. There was even a young child, all dressed up with a wig, there who must have been in early elementary school.

Even with such a small space to perform, each queen brought their own fun, “forget love” take to the table. The theme that connected each act was feminine power and “f— Valentine’s Day.” The event was hosted by Aurora Thunder and featured queens Peach Fuzz, Anhedonia Delight, and Dusty Bucket.

Their unique styles of drag each manifested in memorable performances. Thunder started off the show and proclaimed that she was “here to give a big fuck you to Valentine’s Day, because I’ve been single for four years.”

Aligning with her comments about Valentine’s Day, she performed to Little Mix’s “Shout Out to my Ex” wearing a jumpsuit that was the lovechild of sequins and cowboy. The black, glittery tassel jumpsuit was contrasted with her bubblegum pink wig and dramatic but cutesy makeup. In her second number, she stunned in an all-red ensemble in which she removed her wig and petals fell out of it. She continued performing without the wig, presenting a more androgynous look.

Fuzz also delivered two energetic performances. Her first look was a red, skin-tight bodysuit covered in big flowers. Per usual, her beard was coated in glitter, skewing what we typically perceive as womanly. In her second look, a big, tulle ball gown, put her chest hair on display.

As this was a show celebrating the feminine and expanding the definition of who and what that includes, her first performance started with Cyndi Lauper’s “Time After Time,” which abruptly went into “Girls Just Want to Have Fun.” The whole audience was singing and dancing along, and they were also singing along during a later, darker performance from Delight.

Known for her frightening looks and alternative drag, Delight had a bloody hearts makeup look and a black petticoat over her flannel-patterned dress. Her song of choice was the emo classic, Fall Out Boy’s “Thnks fr th Mmrs.”

Her performances were the most cynical towards love, which is very on-brand for her. The self-described “Cleveland’s femme fatale of filth” is the hostess and creator of GlamGore, which is an “alternative drag [show] that shits on RuPaul’s.”

Drag as extreme as hers and drag like Fuzz’s both are important in expanding the horizons of what forms drag can take and how many different ways femininity can be expressed.

Meanwhile, Bucket took camp to another level by coming out in, essentially, a bed comforter and a pillow wrapped around her head. She dragged herself through the crowd like a sleepwalker and even collapsed onto the floor at one point.

Her second act took camp to a meta-level, by replicating Lady Gaga’s 2019 Met Gala entrance. Bucket did it all: walked around with the black umbrella, took off three whole dresses and ended up in fishnets and underwear.

Interestingly enough, Bucket is a cisgender woman and drag queen. Her art also offers another angle on what forms drag can take and how the concept of gender presentation can be played with. Drag is obviously something she is dedicated to, considering the intricacy of her performances, and she runs the Instagram account for Drag News Ohio to make local drag show information easily accessible. She will be hosting the drag show Iconic at the Jolly Scholar on Feb. 22 at 9 p.m.

To end the show, all the queens danced to Whitney Houston’s “How Will I Know.” They even invited the dressed-up young child to dance with them. Thunder lifted the kid up and thanked parents who are raising their children to be free and express themselves.

The four drag queens and the young child were all different in their approaches to femininity, but they all represented different and valid ways in which the binary can be pushed.