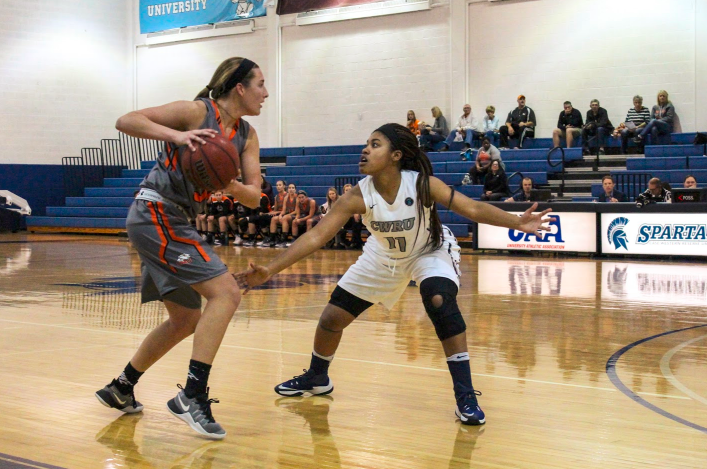 The Spartans now have a four-game win streak and are looking to continue it. The Case Western Reserve University women’s basketball team continues to dominate its competition in the regular season and now sits at an impressive 6-2 thus far in the season, a record which includes being undefeated on the road. The Spartans played a strong defensive game at Denison University, followed by an equally strong offensive game at The College of Wooster. They look to keep winning tonight when they visit Kenyon College.

On Nov. 30 CWRU played against the Denison University Big Red. Although the Big Red took the first basket, the Spartans went on to a huge run, eventually getting their lead to 18-7. The high-scoring first quarter was not a continuing trend, however. The Spartans kept the lead for the remainder of the game, but the gear shifted for both teams towards defense. After CWRU scored 39 points in the first half, the Spartans and Big Red combined for only 46 points in the second half.

Despite losing by 15 points, the Big Red had a double-digit lead in terms of rebounds. The decisive statistic that determined this game was actually turnovers. The Spartans committed just four, whereas Denison committed the demoralizing total of 18. They also allowed the Spartans to score 16 points off of their fumbles.

The offense was led by third-year forward Kara Hageman who had 20 points in the game. Second-year guard Hillary Hellmann was not far behind with 18 points, despite uncharacteristically going 0-of-5 from beyond the arc. On the defensive end, first-year guard Alicia Marie Gonzales led the way with five steals, and Hellmann was close behind with four.

After their strong defensive efforts against the Big Red, CWRU moved on to play against the Fighting Scots from The College of Wooster. The first quarter was dominated by Hellmann, who was a perfect three-of-three from beyond the three-point line, leading her team to a double-digit advantage in just one period. She would go on to shoot four more three-pointers, making two of them.

In the third quarter, the Fighting Scots closed the gap to eight in a desperate and incredible push led by third-year guard Aki Shurelds. Despite the push, the Spartans would dominate in the fourth quarter and win by 25 points in the 97-72 blowout.

Hellmann led her team with 25 points on 10-of-15 from the field, and she also chipped in three steals to the defensive effort. Again, Gonzales led her team in steals with five, and she also had an eye out for open teammates as she racked up seven assists. Much like their game against Denison, CWRU lost the rebound battle in the game but also created a drastic difference in turnovers to make up for it.

With momentum behind them, the Spartans are now looking forward to their game at Kenyon College, their last regular-season game of the calendar year. Their next non-tournament game will be on Jan. 7 in Pittsburgh against conference rival Carnegie Mellon University. Between the two games, the CWRU squad will look to dominate in the Capital Holiday Tournament on Dec. 29-30 in Bexley, Ohio.