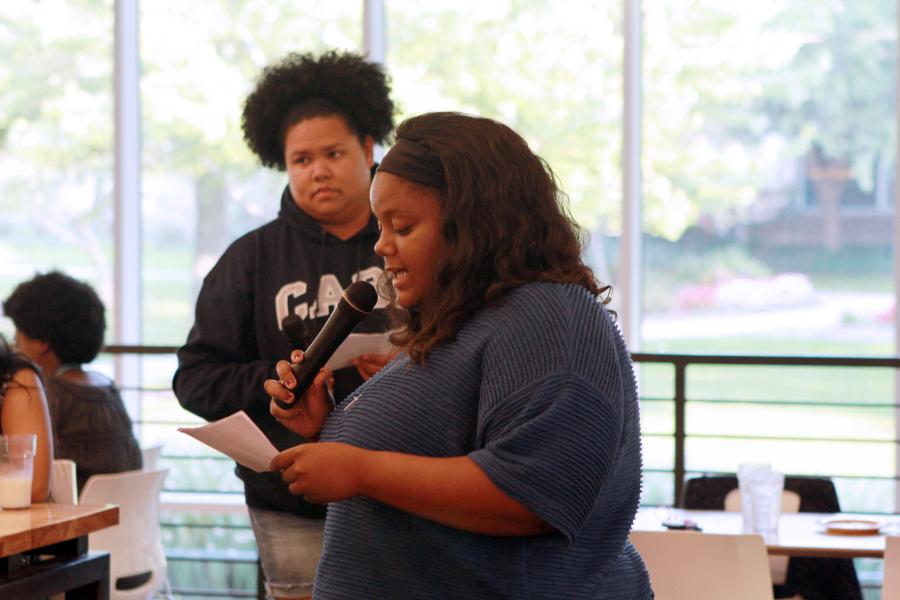 “Part of me says that I’m used to this shit. But you never really get used to being systematically excluded from the spaces where you want to feel safe.”

Junior M. C. Perrin’s words from their flash monologue reverberate throughout the Thwing lobby, hitting people with a weight heavier than anything they expected to hear at UPB’s weekly Thwing Tuesday event. Many of the gathered students watch with fascination, but some turn their heads or stare at their phones. They’re uncomfortable with the subject matter. They’re supposed to be.

Perrin’s monologue is part of a larger movement led by the CWRU African American Society (Afro Am) about how underrepresented student groups are treated on campus.

It’s theme: #webelonghere. It’s a simple concept—we are all students at CWRU, we all belong on this campus, we should all feel safe and welcome and accepted. A simple concept, but, for many, not a reality.

As a transgender student, Perrin’s story of personal difficulties was one of many flash monologues hosted by Afro Am which have been performed across campus throughout this past week.

The monologues came from a discussion at Afro Am’s race relations forum, which was held in the Tinkham Veale University Center on Sept. 28.

“Our campus is long overdue for this movement,” Afro Am President Destinee Henton said, welcoming over 120 students who showed up to the event, which was planned in just three days. “As CWRU Afro Am exec, we are committed to non-complacency this year.”

The tagline for the forum was “lean into discomfort.” Students came to talk about the topics that most people avoid—race relations, acceptance and inclusiveness. They gathered to talk about changing the things that plague many students at CWRU.

At the event, students were split into small groups and were asked to write down any negative experiences that they personally, or someone they knew, had with their race or identity. Then, they anonymously shared their stories.

In one story, a student told of how he joined a fraternity, something that he had been looking forward to on campus. During Greek Week, one of his brothers suggested that he should be on the basketball team. When he said he didn’t want to, the brother responded by saying “it’s called ‘blacksketball’ for a reason.” None of the other brothers said anything. The student only lasted in the fraternity one semester before dropping out.

In another story, an African American student talked about walking home from the library late at night and being stopped by a security guard and asked to show his ID. The student said that the security guard asked him why he was on campus, even though he was on public property. It was late, the student said, he was tired, and he just wanted to go home.

After some of the stories, there is loud applause, but after others, the room grew noticeably quiet. When Henton read aloud anonymous posts from the popular social networking app YikYak, many students turned away.

“Filipino girls are effectively Mexicans.” “When are people going to realize that racism is about how you dress? No one is scared of a black man in a suit, but a lot of people are nervous of a baggy hoodie with pants at their knees, black, white, whatever.” “Quit being so sensitive.”

On Sept. 18, Afro Am member Makela Hayford attended a campus safety focus group organized by USG. She didn’t leave the meeting happy. Her notes spread across campus like a wildfire.

Hayford and three other students met with James H. Clark, a Caucasian consultant hired by the university to analyze and improve security on the north side of campus following the robbery at Wade Commons over the summer.

When asked what African American students could do to avoid being frequently stopped on campus, according to those at the meeting, Clark advised minority students “to be known” by CWRU police, and to go out of their way to introduce themselves to campus security.

Clark said that he could empathize with Hayford because, from his time working at the predominantly African American Howard University, he “knows what it’s like to be a minority.”

Uncomfortable with many of the statements that Clark made, Hayford sent her notes to the other members of Afro Am, as well as members of university administration. On Sept. 22, Vice President of Student Affairs Lou Stark informed Henton that the security consultant’s contract was terminated.

“[The notes] showed that he wasn’t the best person to be here,” said G. Dean Patterson, Associate Vice President of Student Affairs. Patterson stressed that the feelings expressed by Clark were not reflective of the feelings of the CWRU Police Department.

“The police commander, the chief and another officer came to the program on Sunday, because they really want to be involved,” said Patterson. “They are invested in helping our campus be more sensitive to the needs of all of our students.”

However, Sgt. Jeffrey Daberko of the CWRU PD said that there are still security concerns that need to be addressed.

“Our job is to ensure the safety of the campus community, first and foremost the people and secondly the property,” said Daberko. “If we see people on the property engaged in suspicious activity, we’re going to ask what they’re doing. A lot of our crime, especially theft, is from people who don’t go here or don’t work here… If we see something suspicious and we have probable cause to make the stop, then we’re going to do that.”

She and the other Afro Am members planned the discussion over one hectic weekend. It is the start of a movement that they hope will lead to concrete changes on campus.

The group is promoting three pillars: dialogue to teach people about different races and identities, awareness to let people know that their actions may hurt others and advocacy to make sure that people are standing up for others.

“Remember that this is a movement, not a moment,” Noah Stefanos, a member of Afro Am, said at the discussion. “We’re here to spark change and the first step to change is to make our voices heard.”

Afro Am hopes to do that by working closely with members of the faculty and administration, starting with representatives from offices like the Flora Stone Mather Center for Women and the Office of Multicultural Affairs and stretching all the way up to CWRU President Barbara Snyder.

“The work is hard and laborious and multi-layered, especially given the history of race relations and white supremacy in this country,” said Dr. Rhonda Williams, associate professor of history, who helped Afro Am plan and focus their movement. “That’s why it’s important to have diversity and inclusion initiatives that deal with issues immediately as they arise, make proactive educational and policy interventions and address systematic racism.”

Many administrators suggest that diversity training should be mandatory for all students, faculty and staff.

“I think that we need to be working towards having policies that are in place that mandate cultural sensitivity training, diversity and inclusion training, unconscious bias training for the whole campus community,” said Shannon Lundeen, the director of the Center for Women.

Lundeen stressed that, in order for these trainings to be effective, they can’t just be a one time thing.

“This is about changing culturally ingrained habits of thinking,” she said. “If we want to change people’s prejudices and stereotypes, it takes more than just one training. It takes practice. We need to find the time and create the time on a university level for people here to take those trainings.”

Dr. Marilyn Mobley, the vice president for Inclusion, Diversity, and Equal Opportunity, said that some solutions are already being planned. One training in the works is called Diversity360, and is based off of discussions held at the Sustained Dialogue program, a program which gives minority students a way to get their voices heard on campus.

“We put Sustained Dialogue in place to give students a way to be in dialogue about the issues they are concerned about and then presenting them to the leadership,” said Mobley. “[The Diversity 360 training] is so that we do a better job of educating the campus community about our core value of diversity. It’s one thing to say it’s a core value, its another thing to be sure that everybody knows what that means.”

Afro Am also plans on promoting the Sustained Dialogue program more among their members, as a way to discuss issues that are bothering them and work with administration to fix them.

“I talk a lot about the importance of students feeling that they are seen and heard, valued and respected,” said Naomi Sigg, director of the Office of Multicultural Affairs, Afro Am advisor and co-chair of the committee which runs the Sustained Dialogue program. “Seen and heard is the first step… I connect students to others so that there are strong and important connections that they can use to get things done.”

Henton said that Afro Am also wants to collaborate with admissions to address the issue of the declining rates of African American students enrolling at CWRU, which reached their lowest point since 1995 this year. Through programs such as going out to Cleveland schools to recruit students and bringing prospective students to Afro Am’s Ebony Ball event in December, Henton hopes that these rates will start to improve. Afro Am also plans to organize a kickball game for students from local Cleveland schools, “to tell them that they do belong here as well.”

Another change that Henton wants to see on campus is greater community involvement, especially through community service and volunteering organizations like CCEL.

“We need to get students who wouldn’t normally do community service to go out into the community,” said Henton. “I feel like when you go outside of Case, you start to meet people and you learn their stories, and you’re inspired and moved by the different people you meet. That’s how I fell in love with Cleveland, not just by staying on Case’s campus and hearing about it, but going to Cleveland and experiencing it.”

“Understand why, even though I want to stand here and say, #Ibelonghere, I question every single day whether I actually do,” said Perrin.