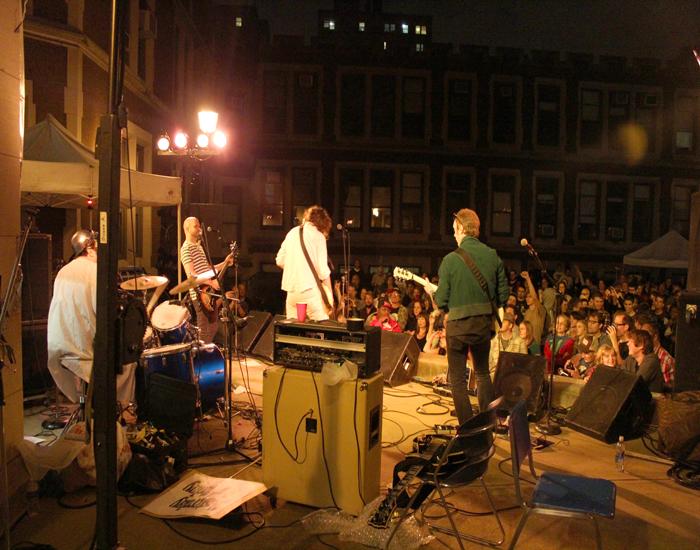 I arrived just in time to see Library Time, a strange alternative local band. The weather started out beautiful; it was sunny, just a little windy, and the grass was dry enough for sitting. Opening the concert pamphlet, I started reading Library Time’s information which started with, “Weird American chlorine pools bespectacled thru him are we and we is he crawling o’er a hallow all-factory, page crankl’d, the cookie crambl’d…”

“What the heck?” I asked aloud, looking to my sister to see if she understood any more of it than I did. She just shrugged, and then the band started to perform.

Right away, the crowd seemed to jump as the bizarre, loud tones sank over the lawn. Sitting right in front of the speakers, I felt a headache start up almost immediately. In such a small area, there was no need for such blasting; I could not even understand the words to their songs.

However, after moving away to the back of the crowd, the music became much clearer, though still awfully loud. Regardless, many other people seemed to enjoy the music, like CWRU student Katy Witkowski.

Witkowski, the General Manager of WRUW, the campus radio station and Studio-A-Rama organizers, included Library Time and Village Bicycles in her favorite sets of the concert. “My favorite band coming out…it’s hard to choose, but it had to have been when the drummer of Death of Samantha came out and threw these Dumdum suckers into the crowd,” she said, laughing.

The only full set I got to experience that night, Death of Samantha’s, was absolutely amazing. Countless arms from the audience flailed up, reaching for various candies the band members flung wildly.

A mix between The Who, Foo Fighters, and The Strokes, Death of Samantha’s classic rock feel was aided by singer John Petkovic’s “stick it to the man!” attitude. At least twice throughout their set, he clapped a still-burning cigarette into his other hand, sending a small shower of sparks over his head. Their stage presence was phenomenal and definitely made the show.

Event co-coordinator Adam Spektor absolutely loved Death of Samantha’s show. “Death of Samantha was very new to me, but they’re Cleveland punk legends…they were a lot of fun onstage,” he said.

It began to sprinkle during Death of Samantha’s show, but the band powered through and finished their set just before the downpour. “Things went perfectly. There was a bigger crowd before Death of Samantha and it would’ve been great seeing the crowd for Cloud Nothings,” Spektor said. “We will remember Cloud Nothings’ in-studio performance forever.”

Due to the weather, Cloud Nothings played indoors with a dedicated group of fans in tow. In fact, they were the first band to actually perform in Studio A since the beginning of Studio-A-Rama about 30 years ago. Though the rain definitely diminished the audience’s size, a sense of intimacy spread through the crowded hallways and rooms of the radio station as concertgoers and band alike sought shelter and enjoyed fantastic music.

I did not stay very long for the Cloud Nothings’ performance due to a lack of space, but I am grateful that I got to see inside the campus radio station headquarters decked out with old furniture, scratched paint, and faded photographs from previous Studio-A-Ramas taped to the walls.

Spektor highly encouraged CWRU’s student body to come out to next year’s Studio-A-Rama and other shows, saying “I would never miss the opportunity to encourage people to get involved in the local music scene. There’s a lot to love in Cleveland music.”

Check out some of the artists in action: [slideshow id=7]