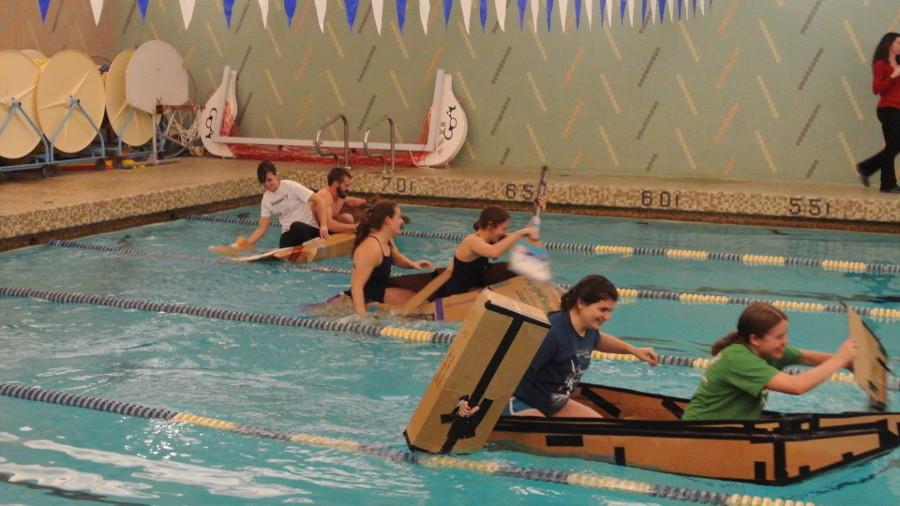 In heat one, the “USSC” dashes from the wall to victory, while the “Whale Wagon” and “1-2-1 Fierceness” attempt to catch up in the inaugural Recycle Regatta in Donnell Pool.

The buzzer sounded, the race was off.

But the contestants were not running, swimming or cycling. Instead they were rowing cardboard boats across Donnell Pool racing not just each other, but also the time until when their boats would give out beneath them.

The premise was simple: use cardboard and duct tape to build a boat capable of carrying two crewmembers the 25 yards of water and to the other end of the pool. However as many teams realized, this was a task easier said than done.

The most important part of the race is of course the boat. The host, Theta Tau, led by event organizer junior Emily Bussis, built their seaworthy vessel over the course of a few hours the Tuesday night prior to the race

The team decided to build a pontoon boat, an ambitious project but one they figured would be the most seaworthy. The team created the “pontoons” out of 15 identical and duct tape sealed laptop-packaging boxes and the hull out of larger conjoined cardboard boxes held together with duct tape, lots of duct tape. When the rolls of the vitally important gray sticky material began to run dry earlier than expected Theta Tau was worried.

“You had one job,” Connor Martinuzzi shouted across the room half kidding to fellow builder Gavin Sandidge.

“You gave me limited funds,” said Sandidge in response, “Do you know how much duct tape is?”

Luckily the team had misplaced a roll and had no problem in building their ship. The concentration and discussion about how to build the boat slowly gave way to a light and laughter-filled atmosphere of friends.

The group decided that their two required representatives, actually in the boat would be Ferin Neff and Rachel Hammond. This was news to Hammond who stopped by the build a good hour later.

The only thing left to decide was who was to be captain, and who the crew member.

“I am totally the Captain,” said Hammond when she heard the news.

“Rachel you are the first mate,” chimed in Martinuzzi, “You are Gilligan.”

Nearly 3 hours, 4 rolls of duct tape, and 15 builders later, unlike Gilligan, the group ended up with a boat that they knew to be seaworthy and also built to code.

The requirements for the boat and also the paddles were fairly straightforward. Tape was only allowed on the seams between the cardboard and the cardboard could not be covered, sealed or waterproofed in anyway. They had to give the boats a chance to sink on their treacherous 25-yard journey to the other end of the pool.

The rules came courtesy of 1-2-1 Fitness’s Kathy Obuszewski the co-organizer for the event. When Bussis reached out to 1-2-1 Fitness with an idea for a cardboard boat race and permission to use the pool, she was pleasantly surprised to learn that Obuszewski had been already been thinking of holding a similar event, and thus the partnership was born.

“I came from a school that had this type of event and it was always really fun,” said Obuszewski, “So I wanted to have one here.”

Obuszewski reached out to Drexel University and asked if she could use their rules as a guide, and was able to come up with the rules used in last Thursday’s event. After a final walk-through on the Tuesday, when Obuszewski and Bussis finalized logistical details for the event, the organizers were set and patiently awaited the turn out.

Thursday evening as the rhythmic splash of open swim drew to a close, Bussis and Obuszewski reminded the five teams of the rules on the warm pool deck. The time began with the buzzer at which point each team was to put their boat in the water, load in their crew, and paddle to the other end. The timer was stopped once a crewmember touched the opposite wall.

The first heat was comprised of three teams. The “Whale Wagon” was entered by the members from CWRU swimming and diving teams and faced up against the “1-2-1 Fierceness” from the co-hosting 1-2-1 Fitness team and finally against the “USSC” sponsored by the Student Sustainability Council, or SSC. The SCC team, made of Cara Fagerholm, Laura Wheeler, Ashley Graybill, Avia Gersovieth and Grace Cammarn, joined the event since the recycling aspect was right up their alley.

When asked how they designed their boat, team captain Fagerholm said, “Um we just kind of made it boat-shaped.”

Despite this basic approach to design, the USSC, stayed intact as it made it to the other end of the pool the fastest of the five teams. After the race it was revealed that Fagerholm, who had recently declared a Mechanical Engineering major had also done some math in order to determine the boat’s stability, “because you know, Case.”

The first heat saw the USSC make it to the other end in an impressive one minute flat. The Whale Wagon showed promise coming out of the gate in lane three making it 25 feet before taking on too much water and sinking in Titanic fashion as the bow rose slowly into the air. The 1-2-1 Fierceness on the other hand barely made it off the wall before capsizing.

Theta Tau and their vessel, nicknamed the “Tau-tanic” matched up in the second heat against the final squad of Veale Center lifeguards. As the two ships took to the water the teams looked evenly matched off the wall. The Tau-tanic jumped ahead a few yards before their aggressive paddling sent them sideways into the lane buoy.

“We were like a beached whale out there,” said Hammond jokingly, once the team made off the buoy and back into the lane, and to the end of the pool. However the beaching cost the Theta Tau team valuable time as they came in second, finishing with a time of one minute and 35 seconds. Despite the strong finish, the team was disappointed with their performance.