RecycleMania kicks off for the 2013 nation-wide competitions 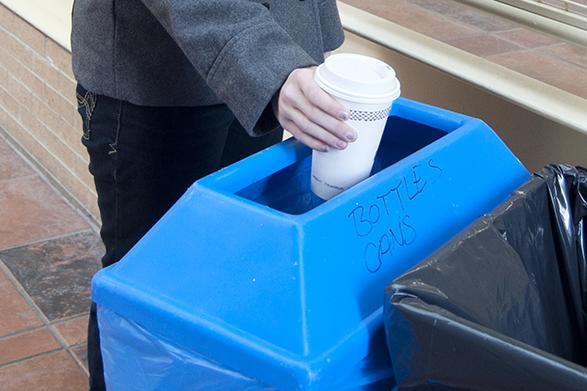 CWRU is part of the national recycling campaign called RecycleMania where colleges compete against one another to see who can recycle the most.

Next time you go to throw your Starbucks cup in that convenient trash can this month, think again about that one-way ticket to the landfill. Case Western Reserve University is competing in the RecycleMania national recycling competition from Feb. 3 through Mar. 30, just part of the Student Sustainability Council (SSC) plans for the next few weeks.

“[RecycleMania] is the nation-wide collegiate waste reduction and recycling competition,” said senior Elena Stachew, former president of the SSC and co-chair of this year’s RecycleMania. “We see it sort of as a time to educate the campus and make them aware of material consumption, recycling, and just sustainable behaviors, and get more people thinking about it for those eight weeks and possibly make some improvements in the infrastructure.”

RecycleMania holds its roots in the state of Ohio. The national competition started between Miami University and Ohio University in 2001, but it has grown to include 500 participants nation-wide, including some schools in Canada. All of the schools participate in the competition during the same eight-week period.

This year’s RecycleMania at CWRU is measuring paper, cardboard, plastic, glass, metal, and e-waste, which is a new category this year. According to Stachew, the new e-waste drop-off areas are located in the Fribley and Wade office areas and are labeled for batteries and small electronic waste, such as cell phones, cameras, mp3 players, iPods, and ink cartridges.

“The overarching theme [of the competition] is to get to be the school with the most waste to be in the recycling instead of a landfill,” said James Hochadel, freshman and RecycleMania co-chair. “CWRU has historically had some room for improvement, and we’re definitely hoping to go up this year with a lot of the publicity we’re doing,” he said.

The SSC is planning on appearing around campus within the next couple weeks to quiz people on their recycling knowledge, hand out sustainable giveaways, and encourage people to sign a banner that signifies that they’ll be thinking about reducing their waste throughout the competition, or even create their own personal pledge to sustainability.

“We will be doing some art displays and marketing campaigns on campus that people will discover as the competition unfolds… it will be a secret until it’s revealed. It’s just getting people to think about their waste, [and] it just sort of pops up and surprises you,” Stachew said.

The SSC is also hoping to dawn their garbage-picking gear of lab coats, goggles, and gloves on the quad on Friday, Mar. 1 from 12:00 p.m. to 2:00 p.m. for a public waste sort. “We’re going to be out on the quad, and we’re going to be pulling trash from a building with ideally very little food and sorting through it in the afternoon in the public with two tarps separating trash and recycling,” Stachew said. “We’re going to build an impromptu art sculpture with the recycling, and then people can take pictures with it when we’re done and help us knock it down,” she said. The SSC is open to other student groups collaborating with them in this creative display of disposal.

“Our recycling rate on average is 13 percent, so it’s not terribly high,” Stachew noted.

“[Our goal] is to improve [the recycling rates] during the competition and then keep them at that level… and it’s even more important this year because the freshman class is going to produce an even larger volume of output than any class before. It’s even more critical to get the message out to them as well as the upperclassmen,” Hochadel said. “I think we manage to get about 10 percent higher year after year, so ideally we’d like to continue the trend.”

The SSC is also offering brief three to five minute presentations on the logistics of RecycleMania for classes, office departments, and students. The presentations cover the new color coated branding program for recycling bins and general tips on how to recycle efficiently at CWRU. Anyone interested in the presentations can email James Hochadel at jth92@case.edu.

The SSC encourages campus members to “like” the Office for Sustainability’s Facebook page for more updates on CWRU’s RecycleMania competition.