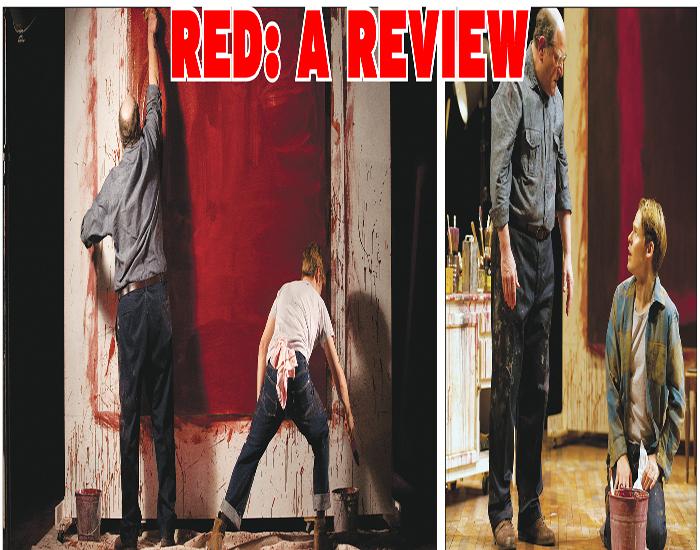 “Red” is not a play. It is the greatest exhibition of Mark Rothko’s work and life that has yet been put on display. Winner of the Tony Award and written by Academy Award Nominee John Logan, whose legendary screenwriting resumé includes titans like “Gladiator,” “The Last Samurai,” “The Aviator,” and “Hugo,” “Red” demonstrates the amazing viscerality and beauty of good dialogue.

Bob Ari dominates the stage as Rothko, the brusque, sarcastic, domineering, yet enigmatic artist who is clearly struggling with his sense of self in the art world, particularly as he works on his famous Seagram Murals for the Four Seasons Restaurant. Like the color black, which he fears so much, Rothko threatens his own creativity with his relentless cynicism. Randy Harrison plays Ken, a young and slightly needy assistant. Yet, much like the color red, he serves to challenge and enliven the aging titan to once again find inspiration to create art. Such a simple dichotomy does not do justice to the level of complexity in the characters. In the end, the intricate dynamic between the characters, much like the dynamic between the colors on the canvas, pulsates with a life force of its own.

Ironically, I was not a huge fan of Rothko’s paintings before I saw the show. I had seen two, one at the Cleveland Art Museum and another at the Chicago Museum of Modern Art. I remember seeing the tour guide in Chicago getting teary-eyed as she described what appeared to me simply a subtle orange square within a slightly subtler maroon square. I couldn’t help but scoff. In both cases, the paintings were mounted on the antiseptic white walls of most modern art museums with sunbeams glaring in through the roof.

I couldn’t have been more surprised when I saw Rothko’s paintings onstage. Red resonated on black with an otherworldly luster, perfectly at ease with the maroon walls in the dim theater light. You could literally see the struggle between the Apollonian and Dionysian forces the characters described taking place on the canvas.

Director Anders Cato does a marvelous job capturing the essence of viewing a Rothko painting. The stage itself is transformed into a chapel to Rothko’s art. The artist’s studio comes alive with the sound of brushstrokes and the splatter of paint. Schubert’s “Death and the Maiden” thunders across the stage as the background glows a bloody crimson. Arias both calm and bombastic set the tone for Rothko’s painting. This is the way one views a Rothko!

There are miraculously few works which are so perfectly in tune with their subject matter that they almost become one. “Red” is one of those. In many ways, it is like a Rothko painting: it is comprised of only two characters and runs about an hour and a half without intermission. Yet, in this seemingly sparse environment, a visceral and moving drama unfolds which explores the philosophy of art and plumbs the depths of human experience.

Ari, in the title role, takes the stage at the forefront of a successful acting career, having appeared on Broadway in “Frost/Nixon,” “The Constant Wife,” and “Bells Are Ringing.” He has appeared in numerous off-Broadway productions, and has made film appearances in “Wanted,” “The Good Wife,” “Law and Order,” and “All My Children.” His counterpart, Harrison, premiered on Broadway as Boq in “Wicked.” He has also appeared in “The Glass Menagerie” at the Guthrie Theatre and in “Twelfth Night” at the Shakespeare Theatre, D.C. With set design by Lee Savage, lighting design by Dan Kotlowitz, costume design by Jennifer Moeller, and sound design by Scott Killian, “Red” is bound to be an instant success.