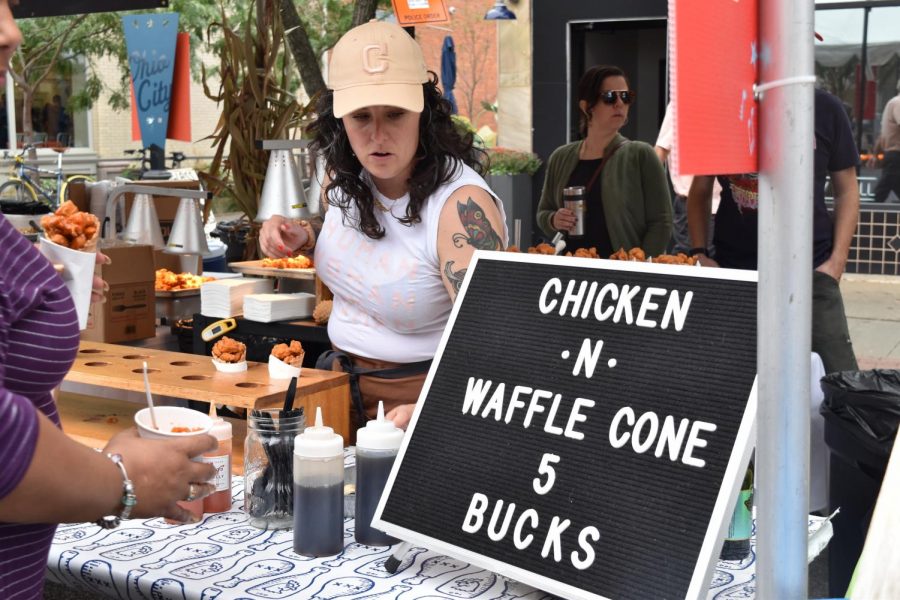 For the past five years, the denizens of Ohio City have gathered together each fall for a street fair. The fair, put on by Ohio City Incorporated, shuts down West 25th Street for a few blocks right by the West Side Market and brings vendors, performers, musicians and everyday citizens  into the street to explore their options and take part in the days activities—including dunking various members of the community, such as City Councilman Kerry McCormack, whose 2:40 p.m. slot on the dunk tank unfortunately coincided with a well-delivered softball courtesy of The Observer.

This year’s festival was held on Sunday, Sept. 29, a day that began fairly nicely but saw some rain develop early on in the afternoon.

“[The festival] experienced a little bit of a setback because of the rain,” said Carrie Miller, the director of neighborhood services for Ohio City Incorporated. “But the great part is that people went into the businesses, which is part of the goal of the festival, and then when the rain ended they came back out.”

In general, Miller described the festival as a success. There were lines at vendors’ tents, people milling around and a small, but dedicated crowd enjoying one of the bands on the stage set up across from the Great Lakes Brewing Company.

Miller did, however, hedge her bets.

“There’s no science to [the festival] that I’ve figured out yet,” said Miller. “We rely very heavily on social media to get the word out, and generally people seem to have responded well to that.”

The rain, however, continued to be a concern, but the weather was not a problem for some festival attendees.

“I kinda came to the fair thinking oh it’s a rainy day, I don’t know how many people will be around on a random Sunday in October to go to a street fair, but it’s really packed and the music is really good,” said Will Erickson, a Case Western Reserve University student currently on co-op.

“The snacks were also a positive,” he continued. “I haven’t had all the food but the food I have had is really excellent, so honestly, I’m impressed.”

The festival is also an important business opportunity. Don Whitaker, the owner of West Side Market’s D. W. Whitaker Meats, was handing out tote bags. Additionally, his organization encouraged local shopping by passing out coupons.

“[The festival] is good for bringing a bunch of people to the neighborhood,” he said.

The rain faded into the afternoon around three o’clock, and festival-goers returned to the streets just as Miller said they would. By Monday, the street was returned to full functionality: the booths put in storage and the band tent taken down. But for the rest of the afternoon, it was smooth sailing and happy neighbors all across the West Side.