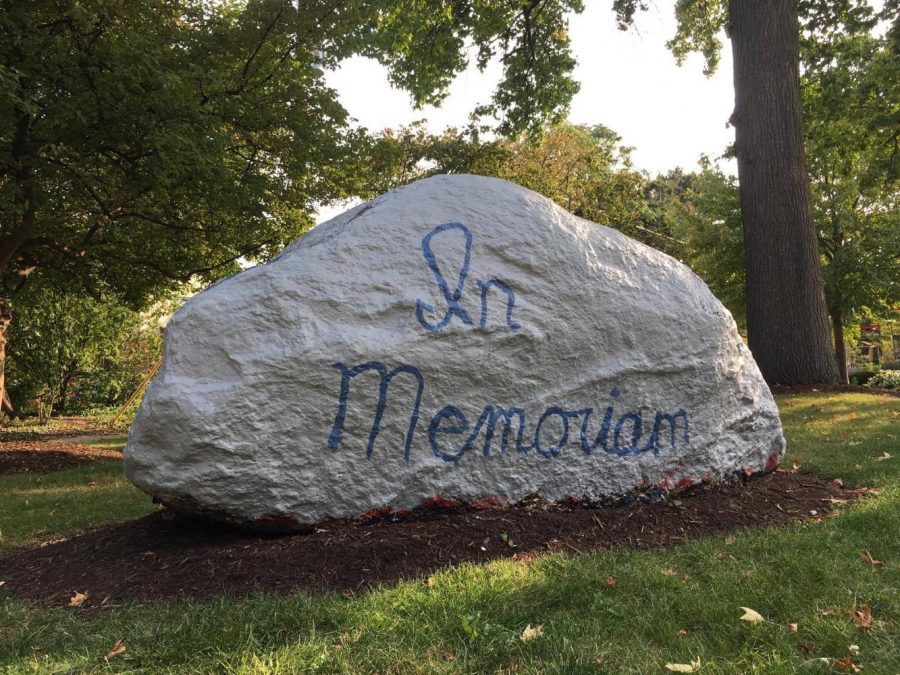 The memorial rock was first painted in August 2014, when four CWRU students were killed in a plane crash. It has since been repainted several times.

In August 2015, second-year students painted the Spirit Rock across the street from the North Residential Village, on Juniper Road to keep students that died in a plane crash one year prior alive in Case Western Reserve University’s memory.

The rock serves the same purpose as the Spirit Wall outside of the Tinkham Veale University Center. After it was used to remember the deaths of four students, the number of different advertisements for events has dwindled.

The second-year students William Michael Felten and Lucas Marcelli and first-year students Abraham Pishevar II and John Hill died in the crash on Aug. 25, 2014, the first day of classes that school year. (The Observer published an article regarding the crash.)

Earlier this semester, dozens of messages from the men’s teammates, members and those who lived on the same floor covered the open space on the rock with notes.

Fourth-year Provost and Heritage Chair of ZBT, Michael Douglass, was part of the first group of students who painted the rock in memoriam of the plane crash.

He said, “It wasn’t a solo decision…[but] we painted the rock not expecting recognition.”

When the rock was first painted on the one year anniversary of the crash — Aug. 25, 2015 — to remember the four men, other organizations painted over it quickly, but when it was painted again on Aug. 25, 2016, the memorializing message remained for the entire school year, giving the impression that it was there to stay. The students who painted the Spirit Rock say they did not intend for it to be used permanently for this purpose.

On Sept. 30, for the first time in one year, the Spirit Rock’s memorial message was painted over; ZBT and Delta Tau Delta (DTD) fraternity did so to advertise their upcoming Halloween philanthropy event.

“I didn’t expect [the rock] to never be painted over again or [to be] memorialized,” said fourth-year student Zane Ostoin, another of the first to paint the memorial message on the rock. “[The Haunted House] is a good cause; [ZBT and DTD] raise a lot of money for hunger and hunger awareness … [I think people should] just be respectful about [painting over the memorial].”

Even though ZBT plans for the rock to be painted in memoriam on every anniversary of the crash, members of the original group to do so hope that other organizations will continue to take advantage of the “cool” way to advertise their events.

In a more formally established tradition, attendees share stories and light one another’s candles to show how one flame can affect so many people at the annual vigils for the plane crash victims.

“How do you tell somebody to remember someone they never even knew?” Douglass said. “Tell stories about the types of people they were, about how they lived, how they were able to affect people in a certain way. That is how you memorialize the strengths of their characters … that’s how you say to ‘live better.’”

Painting the rock in memoriam has become a tradition as well and, according to Ostoin, is a great way for people to become more conscientious and to ground themselves every year. He believes it can remind people to be grateful for life and for what they have.

Some students may not understand the rock or its significance, as the only big words typically painted are “In Memoriam” on one side and “Forever In Our Hearts” on the other.

“I was a bit confused because I wasn’t sure what it was. I just saw a bunch of names and a year. I wasn’t sure who they were or why [the rock] was there,” second-year student Elise Edgar said.

Fourth-year student Keagan Lipak, former president of ZBT and current president of the Interfraternity Congress, shared that there is ongoing discussion for creating a single memorial for all CWRU students who lose their lives during their college careers for a permanent solution to the problem.

“I think it’s certain that a lot of people do want to preserve the memory [of lost lives],” Lipak said. “As long as there is something; I’m not too picky. I think it would go a long way.”