Renovation of Clark Hall to be completed in December 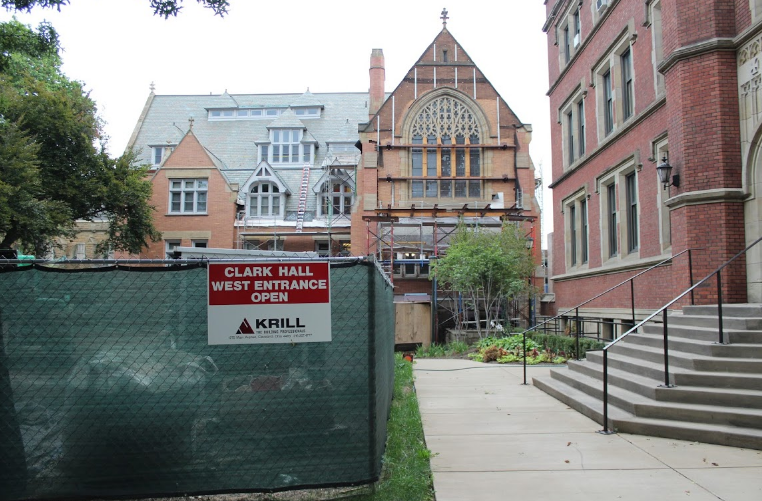 the renovation of Clark Hall aims to restore the building to its state in 1892.

As students pass by Mather Quad, a distinct sight comes into view: lavish yellow tapes and enigmatic green netting surrounding the buildings. More than a simple construction site, this is an exhilarating project as it is a historic restoration of Clark Hall of Liberal Arts, a 124-year-old building, and unsurprisingly, the second oldest on campus. With funding from the university’s capital budget, the workers intend to reinstate the milky orange bricks of Clark Hall.

The project commenced in spring 2016 to replace the brick skin of the building that was initially bound to its interior masonry with iron ties. Over years, these ties gradually corroded, resulting in the deterioration of the mortar joints, water infiltration and slumping and protruding brick on the exterior. Therefore, netting and temporary anchors were installed to prevent any precarious situations for both the students and the workers.

Because this construction aims to restore the building to its state in 1892, the bricks and other materials were required to be of similar size and shape. To fulfill this criteria, a restoration architect was recruited to provide direction on replacing the brick with historically appropriate as well as robust materials.

Currently, the project demonstrates drastic progress, as the brick and window replacements are 90 percent complete. Final replacement of the facade at the southwest corner will also conclude by the end of this calendar year. Interestingly, when asked for the hardest aspects pertaining to the completion of this project, Stephen M. Campbell, vice president for Campus Planning and Facilities Management, said, “The original brick was unique in shape and coloration. It also was laid with very thin mortar joints. It was a challenge to match those features; also, installing the brick to meet dimensional constraints of the surrounding stone was challenging.”

Recognizing that this ongoing construction serves as an inconvenience of a lot of students, faculty and staff members, the vice president responded, “We appreciate everyone’s patience and hope that the restoration will prove as impressive and inspiring as when the building originally opened.”

In the Sept. 21 Faculty Senate meeting, it was announced that the renovation will completed in December.