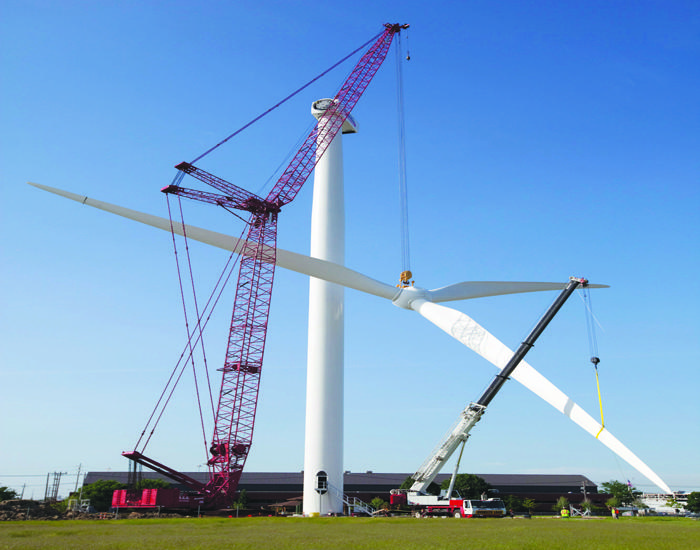 The $6 million project is funded by the Ohio Development Fund and industrial partners, and aims to research better wind energy technology, from blade materials to energy storage and power grid management. The project also represents CWRU’s commitment to sustainable initiatives, including its Climate Action Plan, which aims to reduce the university’s net carbon emissions to zero by 2050.

The first wind turbine, which was erected in 2010, currently sits in front of the Veale Athletic Center. Last year, the windmill provided 58,500 kilowatt-hours, roughly five percent of the total used by the building.

Matthiesen described how the funding came from the Ohio Third Frontier and several industrial partners including William Sopko & Sons and the Lubrizol Corporation. A $3 million grant from the Third Frontier Wright Projects fund was matched by $3 million from the companies for a total of $6 million to fund the project. There is a potential for collecting revenue from the larger turbines by selling power back to the grid.

Matthiesen described the project as a “win-win” for both CWRU researchers and the companies. “…[CWRU] get[s] these great research instruments. It allows us to do our research projects…and it helps the companies because they don’t have to spend $3 million to put up their turbines.” Unlike some corporate research projects, all data and research on these turbines will be published and made available for review by outside researchers.

The Wind Energy Research Center is part of the Great Lakes Energy Institute, which is a collaborative group at CWRU researching energy generation, storage, transportation, and utilization. Other researchers include Roger French, professor of materials science, who is working on photovoltaics, and Arthur Huckelbridge, professor of civil engineering, who has already published some of his work with the Energy Institute.

Matthiesen said that he expects that wind energy will play a significant role in meeting future energy needs. “Wind energy works. It’s just too expensive right now,” he said. “That is an engineering problem,” he explained, and it is a problem he expects can be solved by research projects such as these.

According to Matthiesen, the U.S. Department of Energy has released a report about the prospects of getting 20 percent of our energy from wind by 2030, and found that no major power grid changes would be needed. Dropping costs can come from many angles, such as reducing material costs or increasing the volume of power generated by the technology.

Right now, Matthiesen is working on a proposal for a similar research project to put wind turbines in Lake Erie. The lake is shallow enough to make construction relatively easy, but turbines would have to be able to withstand winter ice. If funded, the new project could put turbines in the water in the next couple of years.

Wind energy is a renewable energy source that is predicted to be part of the solution to meeting future energy needs, while reducing greenhouse emissions from burning fossil fuels. The small research turbine on campus serves as a symbol of the university’s transition to a more sustainable future.

CWRU President Barbara Snyder signed the American College and University Presidents’ Climate Commitment in 2008, committing the university to reduce carbon emissions. This resulted in the CWRU Climate Action Plan (CAP), completed in May 2011, that outlines steps to reduce net carbon emissions to zero by 2050. According to Matthiesen, the renewable energy credits created by the turbine project are owned by the university and may contribute to the overall carbon reduction goal.

Stephanie Corbett, the new CWRU Sustainability Director, began her position in June 2011 after serving as the sustainability director at Cuyahoga Community College. She sees her new position and initiatives, such as the wind turbine research project, as signs of a campus-wide shift in sustainable thinking.

“Seeing these types of technologies on campus shifts our everyday perspective,” Corbett said. “Instead of just studying them in the classroom or reading about utility scale projects in other parts of the state, at CWRU we see a wind turbine every day.”

Corbett said she sees projects like these as a perk of working as sustainability director for a research university such as CWRU.

“Right now one of the things we’re doing is looking at ways to improve curriculum around these topics,” Ruhl said. The Sustainability Alliance wants to incorporate sustainability into the curriculum as another part of the Climate Action Plan.

Elena Stachew, chair of the Student Sustainability Council (SSC), said, “The SSC’s goals are to educate the campus community on local environmental issues and promote sustainable living practices that can be applied both on and off campus.”

Their role in the CAP is to involve the undergraduate population and help usher in needed changes to student life with the support of USG and the student body.

“For these reasons, I think our organization will be a very integral part of the picture in order to achieve the goals outlined in the [CAP],” Stachew said.

From the Great Lakes Energy Institute to student government and Corbett’s new position, CWRU is positioning itself to meet its climate goals and become a leader in energy research that will help other institutions meet their goals as well.