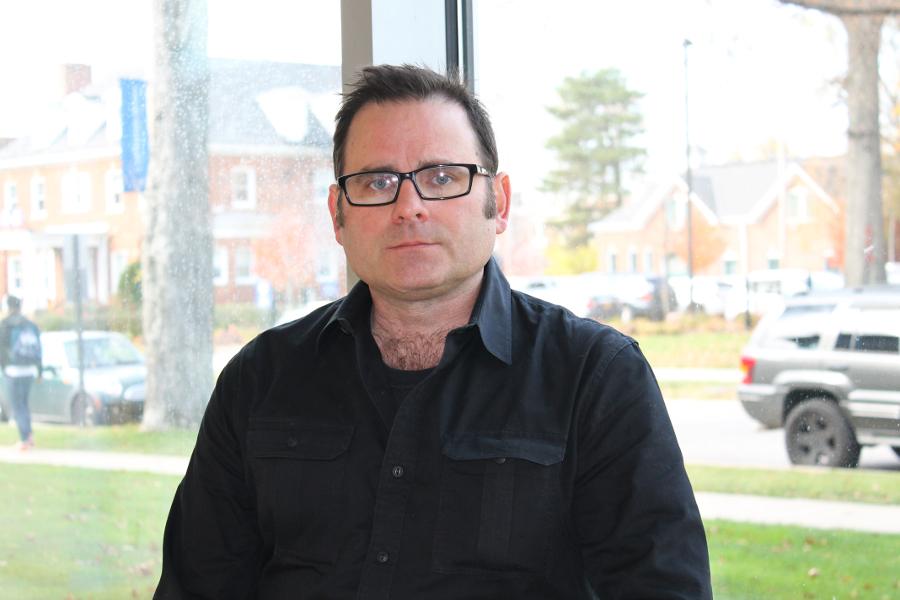 Researcher Joseph Galanek worked in a prison system for seven years before coming to CWRU. His experience inspired his current research.

A co-worker once told Joseph Galanek, “No one ever plans to come work in a penitentiary. It just happens.”

Coming out of college with a degree in psychology and a keen interest in abnormal psychology, Galanek found himself working as a mental health specialist for a county jail in Florida.

“It just happened to be that I had the experience for the job,” he said.

When Galanek started work in the prison system during the mid-1990s, the state penitentiary lacked a coherent mental health system to serve its inmates.

“Back then, there was no roadmap for this,” he said. “I was sorting things out on my own. It was a madhouse.”

Galanek advocated for mental health inside the prison system and worked to build a mental health support system from the ground up. Though he encountered some initial resistance from a small number of correctional officers, Galanek stayed to “get the job done” and the institution’s mental health situation gradually improved.

However, the unique stressors of the prison environment—manipulation, assault, suicide and more—began to take a toll. After seven years of direct clinical work, Galanek made the decision to shift his focus to research, earning a doctorate in medical anthropology from Case Western Reserve University.

“It was difficult to walk away from that,” he said. “[But] I don’t think you could be a mental health professional [there] for thirty years.”

Eventually Galanek returned to his old workplace, this time as a research associate with the Begun Center for Violence Prevention, Research and Education at the Jack, Joseph and Morton Mandel School of Applied Social Sciences. In his nine-month study of mental illness in an Oregon prison, Galanek had the advantage of viewing the issue from two perspectives: the mental health professional and the researcher.

“Correctional officers have a model in their minds about what mental illness is and how to deal with it,” said Galanek.

Galanek’s research looks at how, through training and experience on the job, officers can learn how to manage mental illness to keep the peace and make the cellblock safer. Through 430 hours of prison observations and interviews, he found that things ran more smoothly for the prison overall when officers were trained to identify and respond to the symptoms of mental illness.

According to Galanek, the cultural value system of institutions encourages officers to use their own judgment when managing an inmate. Officers really get to know their inmates through frequent interaction and learn how to deal with them on an individual basis, which can help them come up with more efficient ways of managing mentally ill inmates.

Galanek says that, contrary to the stereotypes of the by-the-books officer depicted in movies, officers often want to work with mentally ill patients and “cut them some slack.”

“Officers want things to run smoothly without incident,” he said.

Through his previous work in Florida, Galanek knew how to navigate the prison system and the culture and language of corrections. He also benefitted from the connections he made with inmates and staff.

“By the time I left, I had a lot of respect,” he said. “Staff knew me and could trust me. [And inmates thought], ‘this guy is legit, he knows the language.’”

Galanek sees two reasons for his research. Because severe mental illness, including depression and schizophrenia, affect 16 to 20 percent of prison inmates, mental health incurs a significant cost. According to Galanek, mental illness costs the taxpayers twice as much to treat in a correctional institution than in the community. It also increases costs within the prison itself by increasing conflict.

“This is a huge policy concern for people who run state institutions,” he said.

He also emphasized the social justice aspect of mental illness in prison.

“Inside institutions, these individuals are more likely to be looked over,” he said.

Living in the “toxic environment” of prison, people with mental illness are more likely to be victimized through exploitation, manipulation and violence by what Galanek calls “Pulp Fiction gangsters,” or antisocial and manipulative criminals.

To Galanek, the primary take-away from his research, which was published in Medical Anthropology Quarterly, is that prisoners deserve humane treatment.

“We shouldn’t forget that there are a lot of people in the prison system that need help,” he said. “You have to treat people with respect, dignity, politeness and courtesy.”