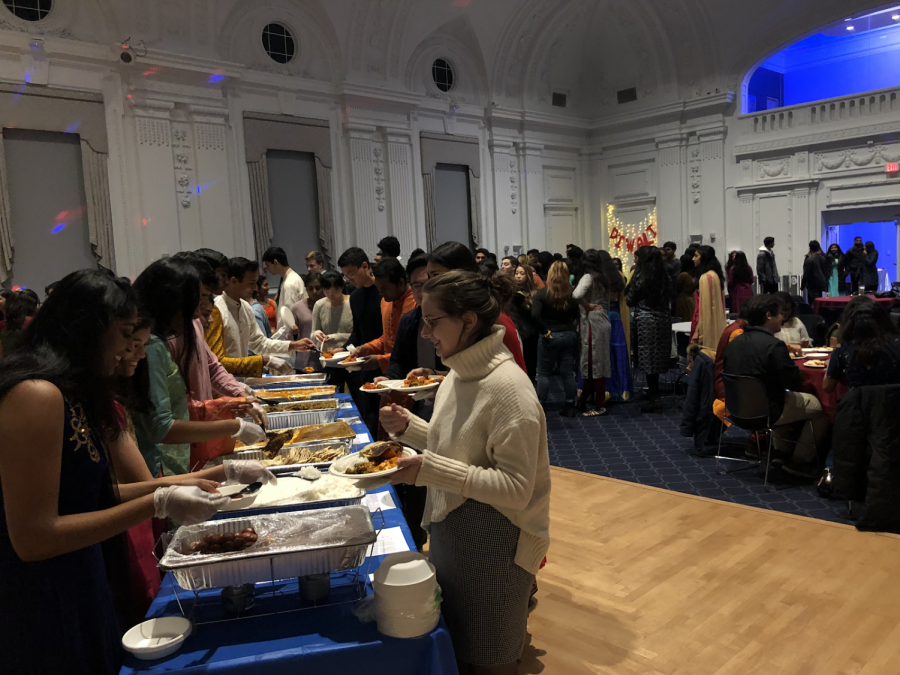 To some students, uISA’s Diwali Dinner sold out in more ways than one.

Before arriving at the Thwing ballroom for the undergraduate Indian Student Association (uISA)’s “Diwali Dinner,” I had high expectations. With uISA being one of the largest cultural clubs, and clubs period, on campus, they had a reputation for fun events filled with flavor and culture.

In fact, their Navratri Garba earlier this year, which I had previously written about, was a fun, accessible experience, allowing Indian students and non-Indian students alike to partake in the festivities of the holiday and provided the Case Western Reserve University community a taste of authentic Indian culture, whether it be through dance, stories, food and music.

Diwali, also known as Deepavali, is one of the Indian subcontinent’s largest holidays, where people light up their home, engage in fun traditions, tell mythical tales and spend time with family to celebrate the victory of good over evil.

However, you wouldn’t know any of that if you visited last Saturday’s “Diwali Dinner,” held from 6 to 8 p.m.

Walking into the event, I was first struck by the lack of cultural cheer in the room. Outside of a few tea lamps on the tables and a small string of lights in the back with the word “Diwali” on it, few decorations were present.

If it weren’t for the people wearing colorful, traditional Indian clothing like saris and kurtas, you wouldn’t have even known that it was an Indian event, especially for a festival centered around, well, lights. But that really wasn’t a big deal. As long as the spirit of the holiday was in place, then it wouldn’t have been an issue.

However, the realization dawned on me that this was a Diwali event in name only, trading cultural authenticity for blandness. After entertaining performances by campus favorite Dhamakapella, a Bollywood fusion a cappella group, and Kismat, an Indian fusion dance team, the club’s first-year representatives gave a brief presentation about the cultural significance of Diwali.

Missing were any mentions of cultural legends that form the basis of Diwali, the diversity of celebrations across the multiple religions and regions of the subcontinent, or any of the activities or traditions done.

Instead, audience members were left with the impression that the holiday is solely about food.

Often, cultural events have an overreliance on using food as a central focal point of their events as a means to draw people in, but as a result, the event solely becomes about food instead of an encapsulation of the holiday itself, creating a one-dimensional essence.

While the celebration could’ve been a place to educate non-Indians about holiday customs, such as with an activity like colorful powder patterns called rangoli, as is traditionally done around Diwali, or by enabling participants of the event to partake in Indian dancing, it instead just becomes a place to get cheap food.

Funnily enough, one of the few activities present was a poster where people could stick on their favorite Diwali traditions, most of which were missing.

Some traditional celebrations, like the lighting of fireworks and sparklers were understandably missing; as uISA co-president Shilpa Namala noted, “The school doesn’t allow us to do that.” However, the overall genuineness and cultural feeling in the event were lacking.

Other attendees had similar feelings. “The event was decent and a change in normal routine, but I felt like it was lacking,” first-year student Surbhi Nandikolmath said. “Also, if they were going to make a presentation about the origins of Diwali, I would expect it to have actual content.”

When asked about the intentions of the event and the decisions made, Shilpa elaborated that “the event is bringing everyone together … giving people the opportunity to meet people they don’t know … It’s a place for everyone to gather.”

Well, gather they did, with all 150 tickets sold out, so perhaps the trade off of authenticity for cheap Indian food was worth it.

In the end, my main confusion was the purpose of the event. Outside of the ostensible reason of gathering people together around food, why label it a Diwali dinner? If it was an educational event to teach non-Indians about Diwali, it was unsuccessful in that regard, as the only takeaway was food, leaving no accurate representation of the holiday in their minds.

However, more egregiously, if this event and uISA as a whole meant to provide students of Indian origin a place to celebrate their culture and holidays when they are unable to do so otherwise, being away from home and family, then it was also unsuccessful as it was unable to effectively encapsulate the feelings and values of the holiday for the sake of increasing accessibility, especially when that accessibility wasn’t even helping people properly understand the festival.

Well, there’s always another uISA event, and I can only hope that Andaaz, uISA’s cultural showcase of Indian dance to be held on Nov. 23, can properly convey the essence and authenticity this Diwali event was missing.