Reviewing designs of the new emoji

Reviewing designs of the new emoji 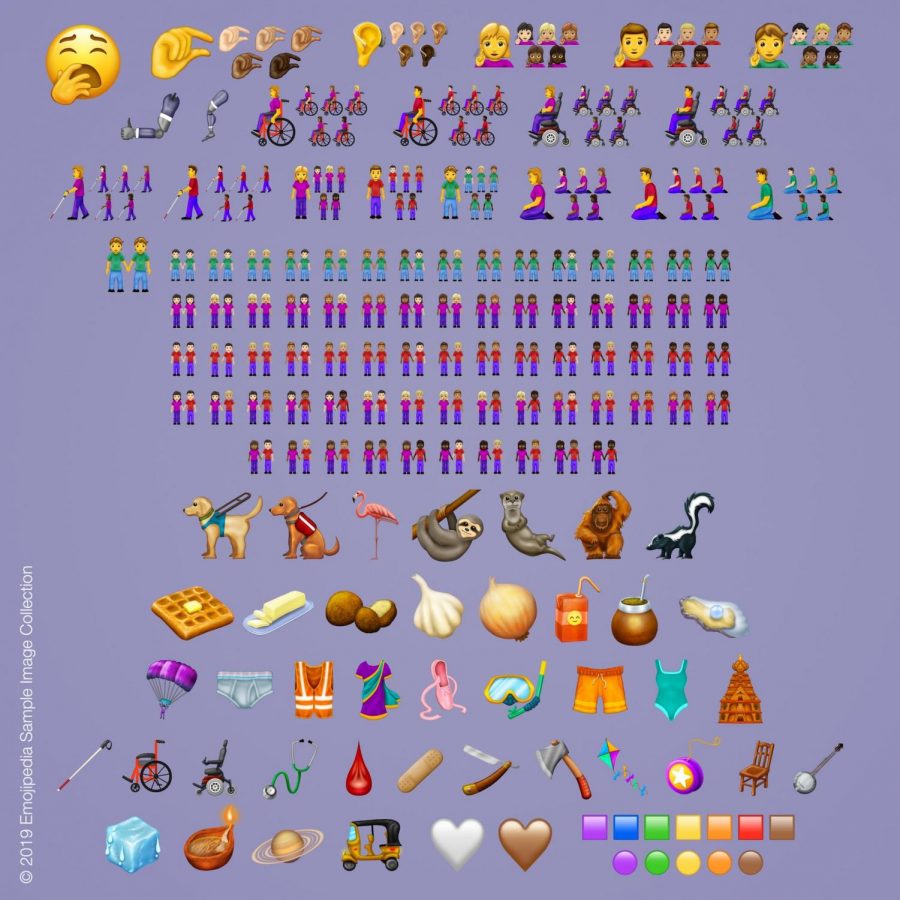 In its 12.0 update, the Unicode Consortium introduces 59 distinctive new emoji to mobile users around the world, such as the seeing-eye dog, the blood droplet and the pinching hand emoji.

The Unicode Consortium, the non-profit organization that develops, maintains and promotes software that standardizes digital text internationally on all software platforms announced on Feb. 5 the sixth major update to the emoji list since 2014. The update introduces 59 distinctive new emoji and 230 new emoji overall.

The emoji set both expands on the current existing emoji, adding various pairings of same-sex couples, as well as introduces new emoji such as guide dogs, a man and a woman in a wheelchair, blood drops, a sloth, an onion and an ice cube.

This new set of emoji is thought by many as a positive step toward increased representation for underrepresented minorities, especially the LGBT community, women and those with disabilities.

The new emoji set expands on the couple emoji by introducing a variety of skin tones across all gender pairings, as well as gender-neutral emoji for individuals who do not identify with the gender binary. This move has been applauded by many people who call for more representation of LGBT people of color.

A “drop of blood” emoji has been added to the emoji lineup with the new update. The emoji comes after lobbying by Plan International UK, a U.K.-based children’s and girls’ rights advocacy group, in an effort to de-stigmatize menstruation.

“Emojis play a crucial role in our digital and emotional vocabulary, transcending cultural and country barriers. A period emoji can help normalize periods in everyday conversation,” said Carmen Barlow, digital strategy and development manager at Plan UK, in a statement.

Another group that gained major representation in this update are those with disabilities. In its proposal for emoji representation, Apple noted that “adding emojis emblematic to users’ life experiences helps foster a diverse culture that is inclusive of disability. Emojis are a universal language and a powerful tool for communication, as well as a form of self-expression, and can be used not only to represent one’s own personal experience, but also to show support for a loved one.”

Emoji are mainly used to communicate messages through the small cartoons, and thus, the emoji that are added should be commonly used. Emoji such as the Mate, a caffeine-infused tea consumed in South America, and the straight razor don’t seem to have much use in daily conversation and should not be included in the list of the emoji added. Instead, the Unicode Consortium should introduce more emoji that the public would regularly use.

Another issue is that some of the generic emoji are poorly designed. For instance, the faces of the three emoji of people in the wheelchair look flat, even though their face is seen from the side. This is especially noticeable when compared to other emoji facing from the side, such as the man and woman walking emoji.

Additionally, the meaning of the emoji should be clear by looking at it. The newly introduced falafel emoji looks like potato. According to Jewish food website “The Nosher,” the falafel emoji “bears little resemblance to the deep-fried chickpeas we know and love.” Some of their staff members suggested that the emoji look like “German marzipan potatoes”.

However, it is important to note that many software companies, like Google, will produce their own version of these generic emoji, so these design issues shouldn’t be a problem in the long run.

One emoji that has received criticism online is the newly introduced pinching hand emoji. According to Emojipedia, the emoji is “used to suggest that something is small, or to gesture a small amount.”

Many around the world, however, are convinced that the emoji specifically refers to the inadequate size of male genitalia. In an interview with Buzzfeed News, Emojipedia founder Jeremy Burge admits that the presumption is valid. “In context, having an emoji … to refer to a small amount of something seems like it might be helpful,” said Burge. “But I can definitely see how the gesture out of context does seem to imply a man’s small package.”