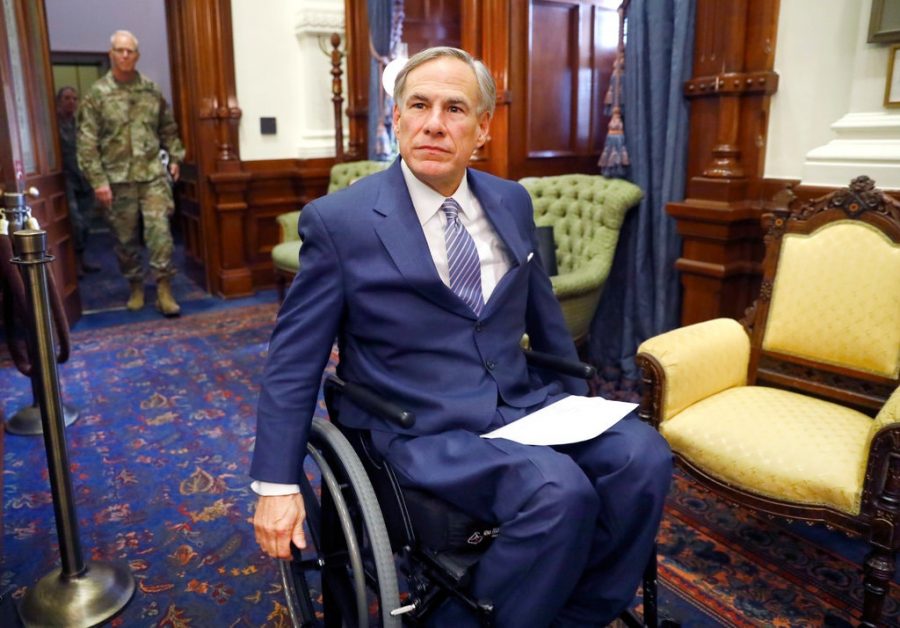 Greg Abbott, the governor of Texas since 2015, is known for pushing conservative policies, and his poor handling of the pandemic and recent power outages have resulted in pushes to vote him out.

Texas is an interesting state. Born and raised there, I always thought of myself as a proud Texan. I had to recite the Texas Pledge of Allegiance every morning and even took a class in middle school devoted to Texas history. I still occasionally say random Texas facts to my friends and get rather defensive about my home state. However, it does have its issues—including state leadership. These past few months have shown Gov. Greg Abbott’s poor leadership.

If you haven’t been watching the news recently, Texas was hit with hard winter conditions in February. Snow, icy roads and prolonged freezing temperatures forced Texans to find ways to stay warm—an uncommon problem in Texas. It would’ve been a nice time to stay warm and cozy inside, but that luxury wasn’t available for most people. Power outages across the state occurred, leaving many Texans with cold homes. On top of that, water pipes froze, leaving some with no water as well.

How does this happen in the Lone Star State? For one, Texas has its own power grid, which exists separate from the national one. Our power grid clearly wasn’t up to the task. Texans blamed the top executives of the Electric Reliability Council of Texas (ERCOT). Abbott called for an investigation of ERCOT to figure out exactly what went wrong. However, Abbott also went on Fox News to iterate why the Green New Deal doesn’t work and blamed green energy for the outages. He used the incident as a way to attack the green initiative that would drastically help Texas become an environmentally-friendly state with more than enough power. Currently, Texas is powered by mostly natural gas and coal, which contributes to climate change. Rather than trying to fix the problem and take responsibility, Abbott pointed fingers at everyone else.

Recently, Abbott also made headlines across the nation by announcing that Texas will no longer have a mask mandate and that businesses can open at 100% capacity. This is perhaps one of the worst decisions he has ever made as governor. The judgement comes just after Houston reported that most of the COVID-19 variants were present in the city. Abbott is letting Texans know that he cares more about his wallet than he does about his constituents. Letting the mask mandate expire as spring break season is about to begin is dangerous and an insult to our healthcare system.

My home, the Rio Grande Valley, was one of the hardest hit areas in the country for COVID-19. Hospitals were at capacity, and there seemed to be no end in sight. This new order hurts me personally, as it’ll mean that my home will once again be susceptible to the pandemic.

The promise emerging from vaccinations will be interrupted by increased gatherings and COVID-19 cases in Texas. I only hope that the damage this causes is minimized as much as possible by businesses requiring customers to wear masks. I also hope that Texans mask up regardless of the disregarded mandate.

Fortunately, Gov. Abbott is up for election next year. It is up to us to vote him out; his failed leadership cannot continue. Texas can be a powerful state with the right leadership. Pay attention to next year’s elections, because they may be just as important as a presidential election. Turning the state blue would let the Texas Republican Party know that they must get their act together.