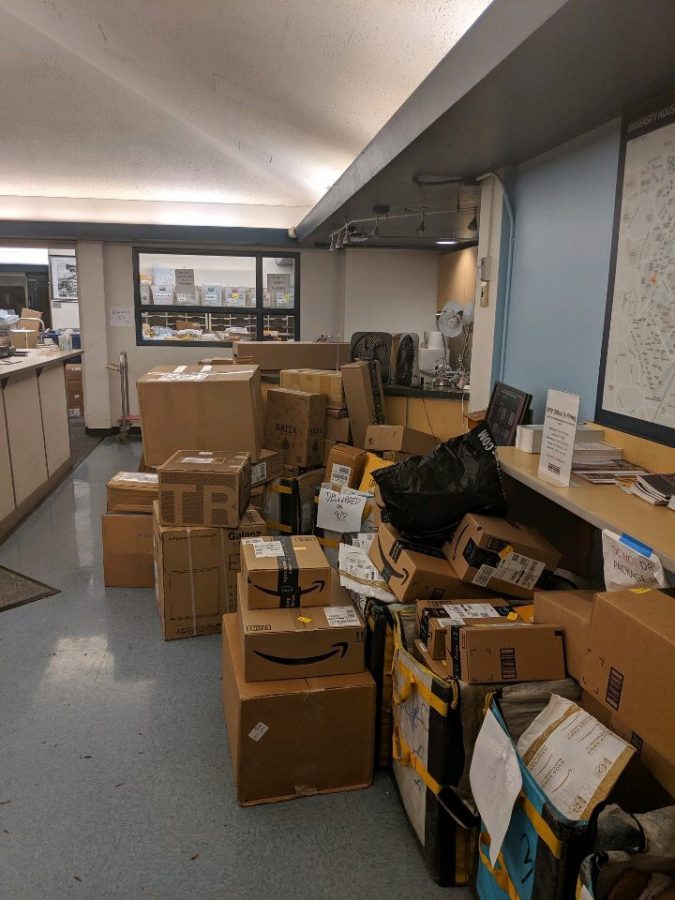 The area office in Wade Commons is overfilled with packages, causing problems for many students.

There is no other way to describe the current situation in the package room at Wade Commons. The moment you step in the door (after waiting in line for 10 minutes to get to the door), you get a first-hand experience of the outdated package system Case Western Reserve University uses.

There are packages overflowing in just about every spot of the room they will fit. Packages to the left, packages to the right, packages stacked halfway to the ceiling—it’s not a sight for the claustrophobe in you to marvel at.

Last week, I went to Wade Commons pick up a computer part that [U]Tech needed to fix my laptop. Obviously, being without a laptop became a problem for my classes, so this was a time-sensitive package. My part was delivered to Wade on Friday at 9:55 a.m. However, I didn’t get the notification that I could pick up my package until Tuesday at 4:36 p.m.

The problem lies in the outdated system used for scanning packages into [HARLD], the Housing and Residence Life Database, that keeps track of student packages. According to one employee, Wade Commons alone is coming up on 4,000 hand-written in packages this semester.

That’s a lot of packages. And to be individually typed into the system? There’s a reason your Amazon Prime-shipped shower loofa has been delivered for four or five days without notification from your favorite pen pal [HARLD] in your inbox.

However, hand-logging packages in the office is only one problem of many. Another student in front of me in line had come to pick up her textbooks. One employee, of only two present at the time, looked for her package for about five minutes before returning, bearing the news that her package was misplaced and that it would be added to the “lost package spreadsheet.”

The fact that there is more organization dedicated to lost packages than the pool of packages sitting in the corner should indicate a problem that needs fixing.

It’s a compounding problem that increases with each delivery truck that drops a load of packages in another spot of the room. Without an efficient system of getting packages in the system and the lack of employees, a solution can’t catch up to the problem.

I believe a solution is accessible, and University Housing has made advancements in the past that have slightly improved the ongoing problem.

At the beginning of the last school year, CWRU implemented Amazon lockers in Leutner Commons and Fribley Commons for the north and south sides of campus respectively. Students can have their packages shipped to the lockers, and can access their package by entering a code linked to their package on the locker’s control panel. These lockers, though, are operated by Amazon and are for the exclusive use of Amazon packages.

In 2017, University Housing introduced a package room in which students could enter with a code and grab their package. However, this posed significant security problems, as nobody’s packages were locked up. This was revised last semester, with Packcity lockers replacing the shelves for UPS packages, working in the same way that the Amazon lockers do.

Though these two systems have proven capable of handling general package traffic, there just isn’t enough space for the ever-increasing amount of packages delivered with increasingly frightening efficiency. Four thousand packages in just two weeks of classes is a lot to handle logistically, and though University Housing has made advances toward better systems, the university must put forth more effort to tackle this large-scale problem.

Jason Richards is a third-year computer science major. He enjoys programming, biking and spending his money on Chipotle.