Richards: The bicycle dilemma on campus 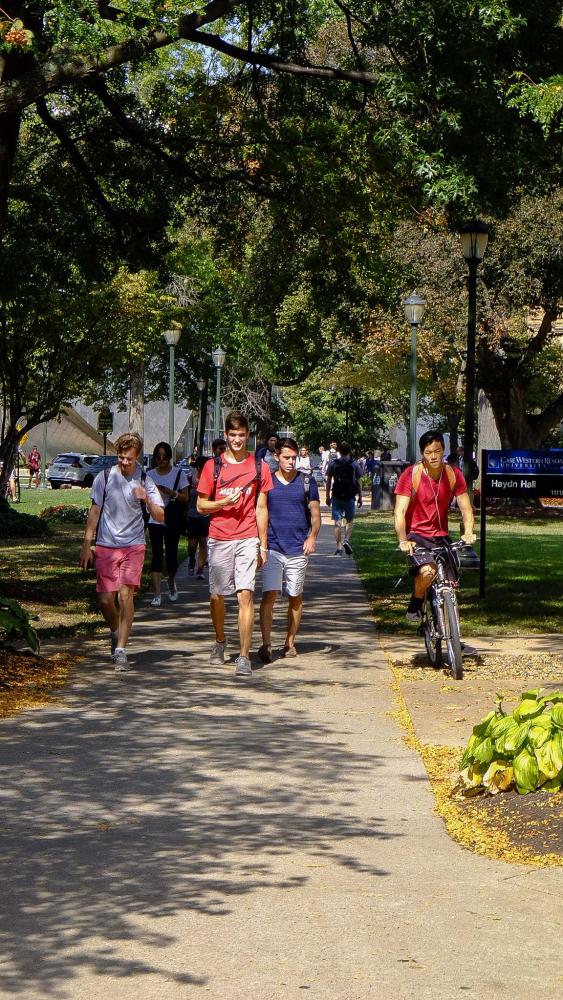 CWRU sidewalks need to better accommodate both bikes and pedestrians

You’re biking to class and a student decides to sidestep in front of you. Or perhaps a group of students feel the need to take up the whole sidewalk. This leaves you no choice but to sacrifice your comfort and take the grass detour or squeeze between that pole and the curb. If you’re a biker on campus, you’ve been there. If you’re not a biker, you’ve also been there: Walking to class, a biker cuts you off, whizzes past you or brushes your backpack with their handlebars. Who’s to blame here?

Surely, the walkers must be at fault. They don’t pay attention to their surroundings, listen for the clatter of the bike chain behind them or leave ample room for riders to pass by. If they would simply be more aware, there shouldn’t be an issue, right?

But…wouldn’t the bikers be to blame? They are the ones who fly through populated walkways and force walkers to jump out of their path or even stop walking altogether to allow them to pass with the right of way. If they were to just use the road and NOT the sidewalks, there’s no way this problem could have arisen, right?

Unfortunately, neither bikers nor walkers can take the blame here. On campus, most buildings aren’t directly accessible by roads, so at some point, bikers are going to need to use the sidewalks. Walkers can’t be the problem when, after all, the sidewalks are not exactly fit for the sharing of space between bikers with a need for speed and students strolling along to class.

Case Western Reserve University has a lack of bike accommodations with regard to these two facts. The only bike lanes noticed around campus are the two fading painted lanes outside of Yost Hall that only stretch about a hundred feet with a minimal amount of pedestrian traffic to begin with. Perhaps the busiest path on campus, the Binary Walkway, restricts bikers from pedaling into the main quad with signs that read “Bikers dismount for pedestrian safety.” It should be added that not a single soul on a bike seems to comply with these.

Sacrificing the means of transportation for any student also shouldn’t be an option. Signs forcing riders to dismount is a lazy and sad excuse for a solution to the problem. The signs themselves and their installation probably cost around the same as hiring a team to paint some lines on the ground.

The CWRU Police Department provides free U-locks to students who register their bikes with campus police. Most buildings have bike racks out front and the majority of residential houses have either dedicated bike rooms inside or more parking outside. This adds up to “over 150 bike racks on campus” according to the Office for Sustainability which, in 2015, employed five new bike “Fixit” stations at various locations around campus.

With all of these accomodations for bike maintenance on campus, why can’t we have dedicated bicycle lanes?

Well, according to an editorial published in The Observer in October of 2013, bike lanes were once in place on the main quad. These bike lanes, which are now paved over, were difficult to follow and completely congested, rendering them nearly useless.

The piece also stated on the Undergraduate Student Government being in the process of forming a dedicated committee to dealing with “congestion on the walkways, safety problems and unclear signage” along with a plan to create more bike trails around campus. Obviously, being a four year old piece, that plan fell short.

Well…what can we do now? Creating bike lanes, forming student body committees and throwing signs all over the place seem to follow an inevitable path of failure or noncompliance to a solution we may think will finally work.

It appears that we are at a stalemate with the answer to this question. In the end, it might just rely on us as students to get used to the occasional breeze a supersonic biker might leave for us, or the occasional pedestrian obstacle we must maneuver around.

Year after year, a solution to this vicious (bi)cycle seems far from understanding or solving. The human virtue of patience in commuting to class might just be as good as a solution gets.

Jason Richards is a first-year computer engineering student. Just about every other day, he can be found at The Den between the hours of 11:00 PM and whenever they actually close.