Richards: The first 2020 presidential debate is as disruptive as it is decisive 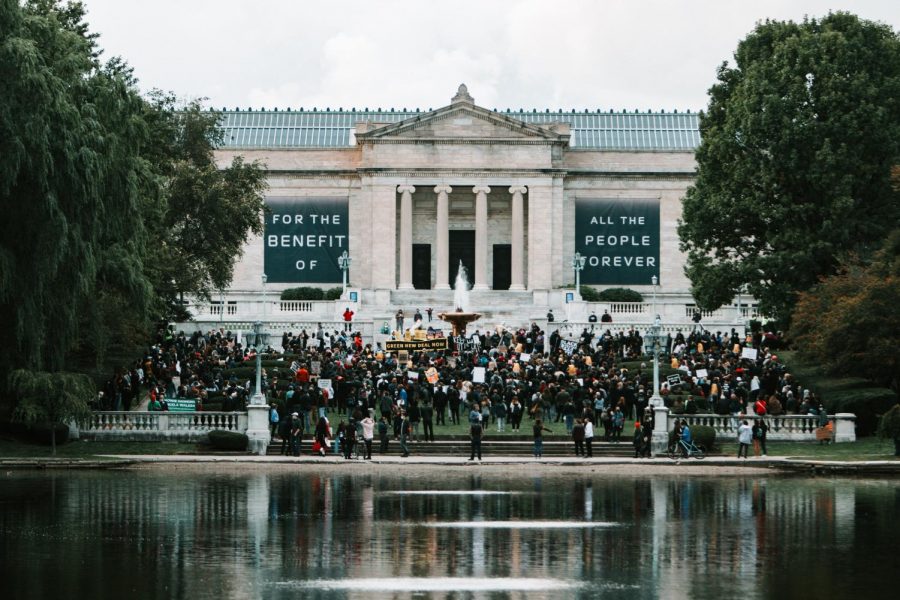 Protesters gather at Wade Lagoon ahead of the presidential debate.

The first 2020 presidential debate brought unrest to the Case Western Reserve University community. Hosted in the Sheila and Eric Samson Pavilion at the Health Education Campus, the debate delivered protests, road closures, police presence, class shutdowns, research cancellations and more to a campus already suffering from the stress of college life during a pandemic.

The bottom line: hosting an event that causes an influx of people anywhere on campus is going directly against what CWRU set out to do at the beginning of the semester.

CWRU wanted as few students out and about on campus as possible, so they canceled most in-person classes and restricted second and third-year students from returning to campus.

The university also restricted visitors, by forbidding guests in student residence halls, and encouraging students already on campus not to go home to visit family or leave campus.

CWRU wanted as little exposure and room for transmission of COVID-19 as possible, so they spent a lot of money—likely thousands upon thousands—on signage, hand sanitizing stations, private testing kits and staffing, individual student kits with customized CWRU masks and hand sanitizer keychains in order to achieve this.

And then they invite one of the most protest-prompting and health-threatening events to campus.

This goes against every measure that CWRU has taken to protect students and minimize disruption to a community already shaken by change.

Users on Twitter have taken to replies in voicing their concerns about the debate coming to campus. User @NOCMES stated that “CWRU pledged that sponsoring this event would not cost the university,” but the university’s actions in “policing campus, closing all Tuesday in-person classes, and generally freaking out students is a huge cost that was avoidable.”

Other students agree and voice similar concerns, some even worried and upset. Thrity Umrigar, a professor in the English department here at CWRU relayed that “students expressed trepidation about seeing the military presence so close to campus,” and that one student said they felt like the debate “added to the existing fear and angst” amidst a pandemic and extremely tense election.

The Undergraduate Student Government (USG) Vice President of Public Relations, Alex Gould, commented that conversations related to the debate have been ongoing within USG. They have received varying student responses, ranging from “excited and grateful” to “angry and disappointed at the university.” This made discussion on how to proceed with supporting all student viewpoints on the debate “tougher to hone in on.”

President of USG Hunter Stecko wrote memos to the student body involving how to safely protest if the students so wished, attaching a “Guide to the Fall 2020 Presidential Debate,” drafted by the Student Presidents’ Roundtable, a group comprised of the various presidents of student organizations on campus. Additionally, conversations within USG pushed for an increase in COVID-19 testing post-debate, to ensure any possible spike in cases would be identified.

In a similar event four years ago, when the 2016 Republican National Convention was hosted in Cleveland, up to 1,900 riot police officers stayed in CWRU residence halls for the event. At that time, students were also concerned with the similar militarization of police in the surrounding campus area. Students created and attended forums, and signed petitions to make sure that CWRU supported its students: ensuring the riot police can’t enter other university buildings, that they would be held accountable for any actions against university conduct policies, keeping the campus community informed and asking that riot police store all weapons and riot-control gear off campus, among other requests.

With the recent unrest, protests and movements against police brutality and inadequate pandemic response across the country as a result of compounding racial issues, political polarization and a global pandemic, CWRU is blatantly disrespecting their pledge to support their students and keep the campus safe with as little disruption as possible.

These issues are magnified when you take a look at the current issues with which CWRU is dealing. Half of the student population has been sent home this semester, only allowing first and fourth year students back to campus.

The Instagram account, @cwru.survivors, has been highlighting and uncovering sexual assault stories at CWRU. Moveover, there have been 750 rape case submissions to the Title IX office in only the first few weeks since the account started. Modifications have recently been made to the Title IX process, but this is an area where the university needs to keep focused instead of inviting turmoil.

On top of this, perhaps the most groundbreaking frustration is that Cleveland’s City Council passed legislation to receive reimbursements for all costs incurred by the security behind the first presidential debate—police overtime, event setup and teardown and other costs. Those reimbursements are the responsibility of the debate organizers, which are, as you guessed it, Cleveland Clinic and CWRU. In addition to taking away the semesters of half the campus population despite still charging full tuition, and spending student dollars on supposedly keeping us safe, CWRU has looked the other way and disrupted the community’s day-to-day at our expense.

The inherent disruption from hosting the debate damages the university’s reputation and their educational mission, counteracting any of the positive publicity and name recognition brought by such a monumental event.