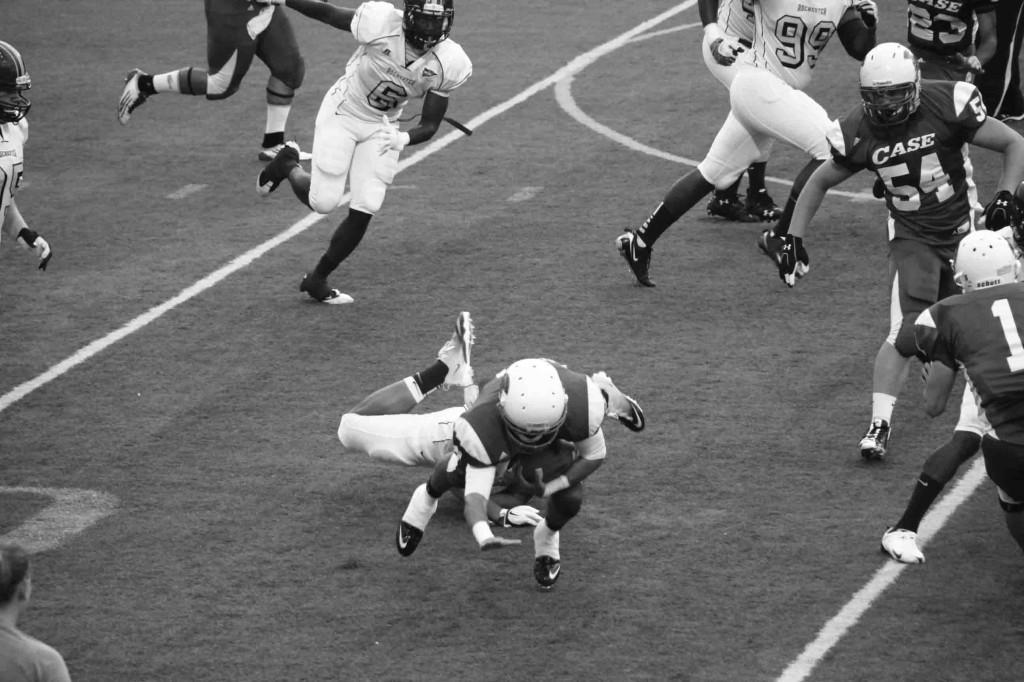 As the summer ends with the reality of college starting again and most students try to shake off the rust, the Case Western Reserve University Spartans were already in mid-season form. Junior running back Kenny Riordan rushed for a career-high 155 yards on just 19 carries and led the Spartans to erase an early 10-point deficit with 26 unanswered points. Case fended off the Pioneers’ own comeback attempt for a 26-23 victory in the 2012 season-opener at Marietta College on Sept. 1, at Don Drumm Stadium.

Coming off a 9-1 record last season that included an eight-game winning streak, the Spartans picked up where they left off. Case has now won 11 consecutive season openers and 25 of the last 26 road games dating back to 2007, including a perfect road record (6-0) last year. After allowing 10 points in the first 8:41 of play, Case’s defense shut the Pioneers out for nearly three quarters and totaled six sacks along with an interception. For the game, the Spartans outgained the Pioneers, 219 to minus three, on the ground.

Marietta reached the end zone on its first possession. After a 29-yard reception by wide receiver Kirby Harris, quarterback Tom Fulton found his trusty receiver again for a 47-yard touchdown pass to cap off a 73-yard, five-play drive. Kicker Conor Durina hit the extra point, and the Pioneers led 7-0 at 13:03 of the first quarter. On the ensuing kickoff, Marietta was able to force and recover a Spartan fumble to grab possession at the 27-yard line. However, the Spartan defense redeemed the special teams unit five plays later with a key stand that included a sack to hold the Pioneers at the seven. Durina then attempted a 24-yard field goal, but missed wide right.

The Spartans weren’t able to capitalize on their first offensive series, which resulted in a three-and-out, and a 43-yard punt return gave the Pioneers possession at the Case 22. After a quick 14-yard reception by wide receiver Tannon Roberts to move Marietta to the three-yard line, Case’s defense followed with another back-to-back goal line stand. The Pioneers settled for a 20-yard field goal by Durina with 6:19 remaining in the first quarter. The Spartans and the Pioneers both failed to capitalize on their ensuing drives, and the first quarter ended with Marietta up 10-0.

After nearly a quarter of scoreless play, the Spartans seized momentum when sophomore running back Manny Sicre made an impact play on special teams with a blocked field goal on a 37-yard attempt with 12:24 left in the first half. Two possessions later, Case marched down the field on eight plays that covered 28 yards. Freshman kicker Won Kun Park capitalized on his first collegiate field goal attempt when he hit a 26-yarder at the 4:53 mark to shrink the Pioneers lead to 10-3.

The defense followed by forcing Marietta out on downs, and the offense took over with a six-play, 54-yard drive that resulted with Sicre’s three-yard touchdown run, the seventh of his career. Kun Park’s PAT tied the score at 10 with 51 seconds remaining in the half. The Spartan defense added a boost before heading into the half when senior nose guard Michael Harris sacked Fulton for a 10-yard loss. The score remained 10 apiece as the first ended.

In the second half, the Spartans took the opening possession and marched 84 yards on eight plays thanks largely to Riordan’s superb 31-yard rush that positioned Case at Marietta’s 11. With senior quarterback Erik Olson at the helm, the Spartans took the lead as sophomore wide out Sean Lapcevic caught an eight-yard TD pass at the 11:16 mark. A missed PAT left the score at 16-10.

The next Pioneer drive started with two receptions by Roberts, a 15-yarder and a 32-yarder that moved them down to the Case 14. However, the offensive fizzled out when the officials called an ineligible downfield pass. The Spartans regained control of the ball and the offense kept its rhythm going with a six-play, 75-yard drive that ended in a five-yard touchdown run by quarterback Olson. Kun Park hit the PAT and the Spartans expanded their lead to 23-10 with 5:47 left in the third quarter.

Case gave themselves some breathing room when Kun Park added his second field goal, a 33-yard rocket, to cap off a 10-play, 75-yard drive with 12:15 left to play, and extending the score to 26-10.

Marietta, however, wasn’t ready to surrender. The Pioneers rallied back into the game with two late scores as quarterback Fulton connected twice with senior wide receiver Linard Williams for a seven-yard TD pass at 6:25 and an eight-yard reception two minutes later. The first score was followed by a failed two-point conversion, and the second was coupled with an extra point by Durina to bring the score to 26-23.

However, the Spartan running combo of Riordan and Sicre would churn out important first downs on the final drive to put the nail in the coffin and preserve the three-point victory.

For the game, Olson completed 10-of-18 passes for 196 yards with one touchdown. Lapcevic recorded four receptions for 81 yards, and senior wide out Brian Rice caught three passes for a career-high 72 yards. In addition to Riordan’s new career-high total, Sicre rushed for 85 yards on 15 carries.

For Marietta, Fulton completed 21-of-37 for 333 yards and recorded three touchdowns. Roberts had six receptions for a game-high 142 yards, while Harris finished with six catches for 109 yards. Linebacker Jake Hammer led all tacklers with 9.5 stops.

The Spartans will continue their road trip tomorrow, Saturday, Sept. 8 as they visit Hiram College at 7 p.m. at Charles A. Henry Field. Case is on a five-game winning streak against Hiram dating back to 2000 with an average of 47 points scored per game.