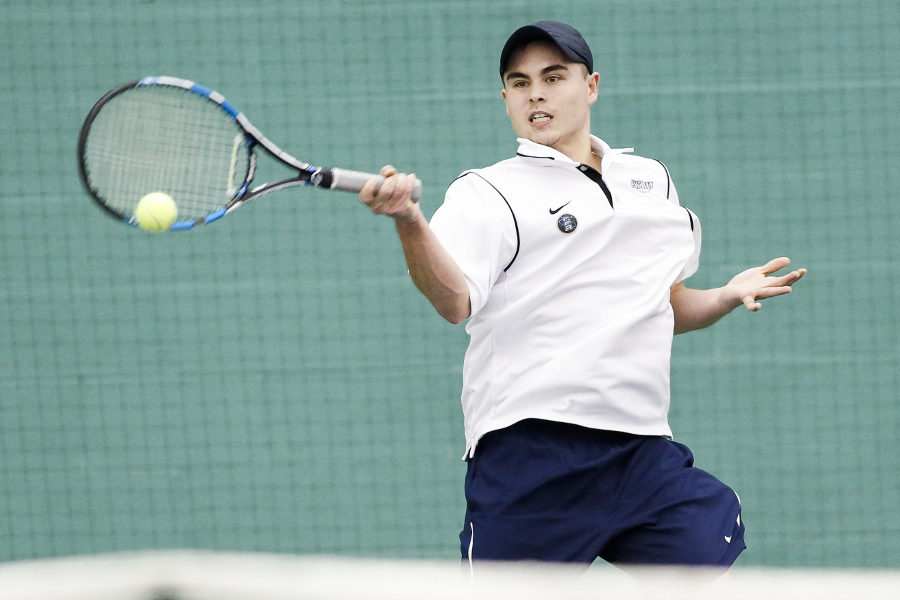 Third-year James Fojtasek smashes a return earlier this season. The men’s team did well this past weekend, winning three of four matches as they prepare for the upcoming UAA championships.

This weekend gave the sixth ranked Case Western Reserve University men’s tennis team three wins and a loss when they played in Chicago. Not everything came easily, as the Spartans lost and had some close victories.

The team won nine to nothing against Elmhurst College, but followed that up with a nail-biting five to four win against fifth ranked University of Chicago Maroons. The next day the team won a slightly close five to three meet up with Coe College but then lost to 13th ranked Washington University in St. Louis seven to two.

The Spartans simply could do no wrong against Elmhurst last Saturday. In singles competition the Spartans won every single game with the only close call coming in first-year student Robert Stroup’s first game, in which he went six to four to come out with the win.

Later that day life was not as easy for CWRU. The Spartans started out the match on top after taking two of the three doubles matches with only third-year students James Fojtasek and Phil Gruber falling eight to six.

With a two to one advantage in points, the Spartans started off singles matches with a tense, edge-of-your-seat match between fourth-year student and team captain CJ Krimbill and Chicago’s Nicolas Chua. The first two games between the two players went to tie breakers with Krimbill taking the first game and Chua the second. The third and final game of the match did not end in a tiebreaker but was still not flawless. Much to the Spartans’ relief Krimbill took the final game seven to five, a victory that likely decided the winning team of the day.

In the next match, Fojtasek beat Maroon Charlie Pei in two games, giving the Spartans a comfortable four to one advantage. The advantage quickly disappeared as Chicago claimed victory in the next three singles matches, putting the teams at a four to four tie with one single match to go between third-year Joshua Dughi and Liu. With the pressure of the team’s fate on his shoulders, Dughi did not disappoint and won both games, albeit closely.

The following day, CWRU took on 34th ranked Coe College and came up with the win after taking all three doubles matches and splitting the singles matches evenly. The real competition of the day came when the Spartans met with Wash U. Although the dynamic duo of fourth-year students Krimbill and Louis Stuerke were able to win another doubles match, their teammates did not have the same fortune. Wash U left the doubles competition up two to one. Knowing his team needed to get out of the deficit, Krimbill again won the first singles match to even the score between the teams at two apiece.

The chances for the Spartans ended there. Wash U would go on to win every singles match from that point on to finish off the score between the two schools at seven to two. After the day, the Spartan record for the season went to 15-6.

The Spartans look forward to three games at home against the College of Wooster, Capital University and John Carroll University this weekend as the regular season comes to a close.