Rolling through the City of Rock and Roll 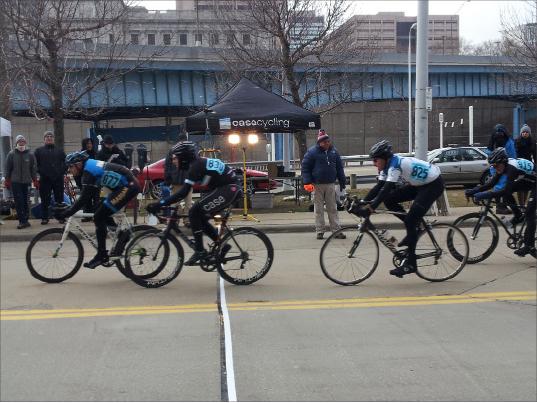 Case Cycling hosted their premier Midwest Collegiate Cycling Conference criterium on Sunday, March 23 in downtown Cleveland. The swirling winds and snow may have postponed a less hardy group, but the team and local spectators were in full force in the below-freezing weather, as the racers made the 1.1 km loop around FirstEnergy stadium on Lake Erie.

This event has been a year in the making. As the club gained popularity on campus and sponsorships from the community, leadership looked to showcase the city of Cleveland and the team’s hard work by hosting a race. Club President Matthew Swartwout was one of the members who wanted to see the Case team take things to the next level. “There are always the same clubs throwing races. So we just wanted to participate and just put our names on the map as more than just a team that just sends a couple riders to every race.”

Most collegiate races last an entire weekend with a road race and a time trial as well as the criterium, a race for points where racers complete a course for a specified amount of time.

However, with the relative inexperience of the team and lack of suitable course availability, Case Cycling decided to keep the event to a criterium only. “Since it’s the first time we’re hosting a race, we wanted to focus on doing one event and doing it really well,” said faculty advisor Ryan Pierce.

In order to make this plan a reality, the club determined several possible sites around the Cleveland area that could serve as the course for the event. Many factors played a part in the decision to host the race downtown. The event needed a distance road course that could be blocked from traffic and free of potholes on race weekend. The team started working to find an ideal location early, but the recent weather and road problems in Cleveland left the club scrambling in the final week. “We started working with the city in November about the event,” said Swartwout. “But it came down to be pretty last-minute because as of three weeks ago, the potholes on the course had not been filled. We knew for sure it was going to happen on Wednesday, but we didn’t get the actual finalized permits until Friday.”

The full-day event featured the collegiate divisions of Men’s A, B, C and D, as well as Women’s A and B/C, which are sorted according to racer skill with the “A” level being elite pro-level riders and the “D” level being the most recreational division. The criterium also had the advantage of organizing three open amateur USA Cycling races, allowing one-day entry memberships to recreational riders who had no previous experience in a USAC race, allowing all interested parties to enter.

The top finishers in the collegiate races were awarded points which went toward a team total. USAC participants in the top division were awarded cash prizes and the lower division winners won prizes provided by Barrio, a restaurant who sponsored the event and had a food truck on site. Between the sponsorships and attendance, the organizers are happy with this initial outing. “It went really well, it was a huge success…We expected to get complaints about the course or for something to not run correctly but everyone seemed pretty happy… and it’ll be a million times easier next year,” said Swartwout.

The race brought in participants from Ohio, Indiana, Michigan, Illinois, Missouri and Kentucky. The top spots in the men’s races went to John Pratt, of the University of Notre Dame in the A race, Tyler Carlton from the University of Michigan-Ann Arbor in the B race, Michael Hart from Lindsey Wilson College in the C race and Austin Ventura from Lindsey Wilson College in the D race. The women’s A race winner was Jacqueline Denny from Lindenwood University and Catherine Hollibaugh from Marian University won the B race.
The Case Cycling team had a strong showing, with Spartan Mathias Ellegiers earning second place in the men’s C race and David Takahashi finishing in sixth place in the B race. Full race results can be seen through the Case Cycling website at www.casecycling.com and updates on future events can be found here as well as on the club’s facebook page, facebook.com/CaseCycling.