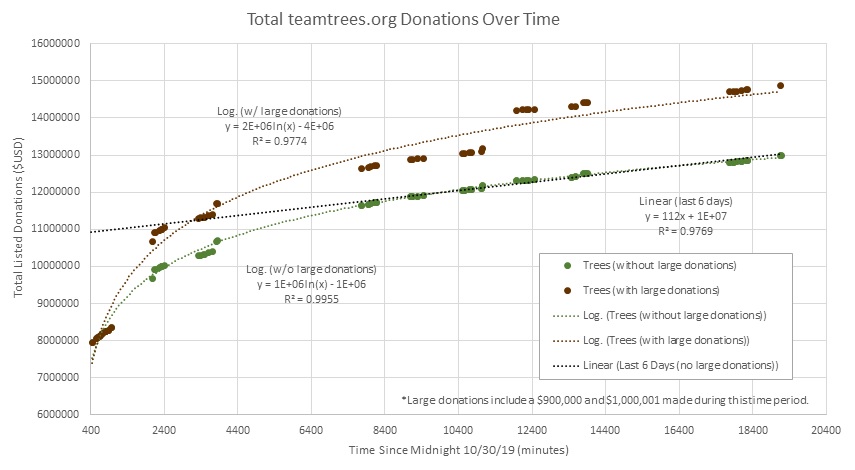 The graph above shows the total donations listed on the #TeamTrees website beginning on Oct. 30. Based on the more steady rate of donations over the past few days ($112 per minute), #TeamTrees is projected to reach their goal on Christmas Day, Dec. 25.

With the copious amounts of social media campaigns and influencers hounding on the issue of climate change, you might begin to ask yourself—just how much of an impact can one more initiative have, and are we really taking action or are we just spewing words into the invisible universe created by technology? Lately, this concern has been raised to the generation whose lives seem technology driven and dependent. Are the words and concerns we are expressing online really getting anywhere past the platform, or are they doomed to a graveyard with all our hopes and dreams of action?

Recently, I learned of #TeamTrees, a collaborative fundraising campaign started by YouTuber MrBeast, that uses the video platform as its primary source of advocacy. The initiative began in May 2019 when MrBeast reached 20 million subscribers and was challenged to donate the same amount of trees as subscribers to commemorate the achievement. The challenge was not taken on single-handedly, however. MrBeast teamed up with fellow YouTuber Mark Rober, and the pair collaborated in the development and organization of the campaign, which launched publicly on Oct. 25. For every dollar donated, the Arbor Day Foundation—one of the largest and longest-running tree-planting non-governmental organizations—has committed to planting a tree in a forest deemed high in need.

After all this new information brewed in my brain for an indefinite amount of time, I decided to visit the website and spare a few dollars for the cause. What’s the loss of an amount equaling an expensive cup of coffee going to cost a student who shouldn’t even be spending that money to begin with? I went ahead and made the $5 donation.

Receiving a confirmation email minutes later expressing gratitude for my commitment to the cause, two points caught my attention. One—the letter of gratitude explicitly points out the magnitude of planting 20 million trees, which in the grand scheme of things is not much (at least not on its own). Second—I thought back to what initially raised my curiosity about the campaign, which was someone else’s excitement for the cause and their belief in the large impact social media campaigns can have.

On the #TeamTrees website, they explain to readers why they are choosing to plant trees as a method of combating climate change, rather than only preserving trees that already exist. They argue that by contributing to this natural, proven climate solution that everyone can partake in through donations, they are becoming a part of the large-scale solution. Additionally, with donations coming from people of all walks of life—from students to CEOs like Tobias Lütke, Elon Musk and Marc Benioff—the initiative is putting out a message of care for the alarming situation before us and is fostering community. Regardless of our backgrounds, we can come together to voice our concern for something as critical as the future of the generations that will come after us.

This signal of community concern is evident as a force in other recent movements, including the efforts of 16-year-old Swedish climate activist Greta Thunberg. The international effects of her activism, including her recent speech in front of the United Nations, have coined the term the Greta Thunberg effect. Post global climate strike that began on Sept. 20, the Sept. 29 legislative elections in Austria resulted in a tripling of support for the Green Party, who scored 14 percent of the vote. This shift is only one occurrence in Europe that could be reflecting an early sign of significant carbon emission regulations passing in the future.

Sally Benson, co-director of the Precourt Institute for Energy at Stanford University, described Thunberg’s impact in an interview with NBC News, “We’re seeing more grassroots action, and she’s creating a movement where young people are pushing communities, cities, states and corporations and saying ‘We’re not going to wait.’”

With these efforts in mind, the payoff is clear. Regardless of the projected speed of policy changes and any tangible results that can be observed from voicing concerns on social media, the indirect impact of community creation is what will propel my and other generations to continue acting and pressing onward regardless of pushback from others, whether they be people in the local community or national leaders. Regarded as one of the largest YouTube collaborations of all time, the #TeamTrees initiative is capitalizing on social media to create a community determined to change the course of our future environmentally.

In an interview with Public Radio International, Destin Sandlin, creator of the YouTube channel Smarter Every Day and a #TeamTrees collaborator, commented on the campaign by saying, “It’s not limited to the younger generation. This is everybody. We want no boundaries, no borders on this at all. It’s all ‘we and us,’ and we’re all planting trees, which is awesome.” To join the #TeamTrees campaign is to join an effort which uses our generation’s technology in a simple way to make a worldwide appeal for climate action.

#TeamTrees has set their deadline for 20 million trees by Jan. 1, 2020. If you wish to contribute, donations are accepted through the #TeamTrees website, MrBeast’s YouTube channel using the donate button, Arbor Day’s Facebook fundraiser or the #TeamTrees Tiltify fundraiser.