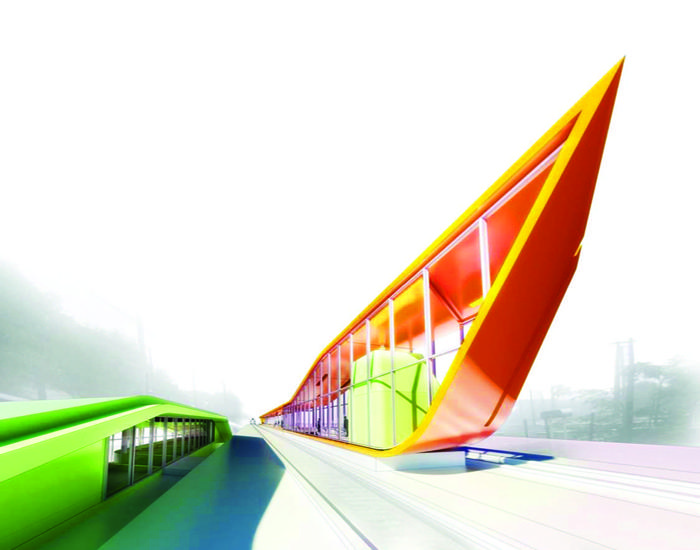 In a few years, students on the south side of campus will have a vastly improved experience using the Rapid Transit Authority’s Red Line.

On Sept. 19, ground was broken for an $18.5 million reconstruction of the University Circle train and bus stop located at the foot of Cedar hill. The project is expected to take two years to complete.

The old train station will be replaced with a new stop that is set to feature a concrete plaza leading up to a glassy entrance building with an organic design and green roof. The new station will have an open feel with lots of natural light and improved ventilation.

Inside the entrance, there will be several art exhibits, including an interactive LED display that was partly designed by a Cleveland Institute of Art graduate.

According to RTA spokeswoman Mary Shaffer, the 56-year-old station is being rebuilt simply because it is “falling apart.”

On top of the train station upgrades, the project seeks to better integrate the third busiest train stop in the RTA system with bus transfers. As a result, there will be some adjustments to the bus route. A nearby bus stop will be demolished and moved to behind Case Western Reserve University’s Emerson building, with the existing area becoming green space.

Both the Red Line train stop and bus transfer center will remain open during construction.

Most of the funding for the project was secured through a federal grant. Over $14 million will be supplied by the U.S. Department of Transportation; the RTA will contribute $3 million, and the state of Ohio $1 million.

In addition to these sources, a consortium group consisting of CWRU, University Hospitals, the Cleveland Clinic, and the Cleveland Foundation donated $250,000 to help give the station a premier design.

According to Chris Bongorno, the director of planning for University Circle Inc., a community service corporation dedicated to advocacy for the growth of University Circle, this project is very unique due to its architecture. UCI played a role in much of the planning process for the project.

“A lot of RTA red line infrastructure is out of sight, and this station is really an opportunity for a gateway piece of architecture that welcomes people to the circle,” Bongorno said. “I think that is why the Cleveland Foundation and several others put money into the front end of design, because they wanted to see it elevated. Not that RTA has failed at developing recent stations, but they haven’t knocked anybody’s socks off. They’re, and rightly so, more interested in function, but this station will be very functional, and also a real knockout in terms of design.”

In terms of traffic, eastbound Cedar Ave. will be narrowed to two lanes, and westbound to three. The Cedar Ave. west loop will be closed to all traffic except buses. Additional lane closures may occur from 7 p.m. until 6 a.m., and will be marked by flaggers.

Junior Jackie Cheng uses the Cedar Hill stop fairly regularly. She says that the remodel was much needed.

“The tunnel always smelled, and it was kind of scary, because there were always random people there,” Cheng said.

According to Sgt. Jeffrey Daberko of CWRU’s campus police force, the reconstruction should improve safety at the stop. Daberko says that Cedar Hill has not been “a huge problem,” but added that incidents have occurred.

“I think that [the renovation] is a good idea, since the station has been run down for a bit, and the lighting isn’t very good,” Daberko said. “Better lighting and the more central setup will make it easier to keep an eye on things.”