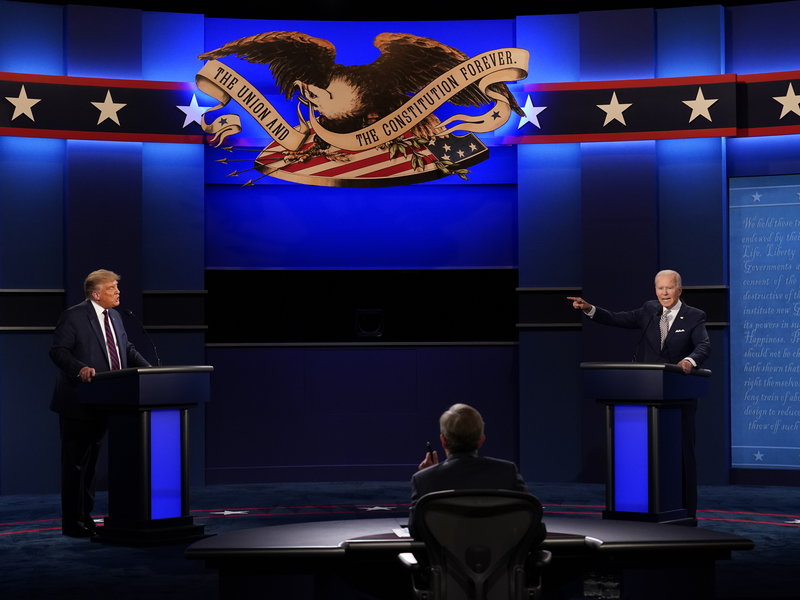 Trump broke every rule imaginable in the 2020 presidential debate, even the basic rules of conversation.

After the first presidential debate, commentators were struggling to find the words to capture what they just saw. The hour-and-a-half ordeal tested the patience—and sanity—of practically all who watched it, except for Chris Wallace, who saw his career vaulted back into relevance thanks to his televised babysitting job.

All throughout, President Donald Trump made a point of interrupting his opponent, former Vice President Joe Biden, or finding other opportunities to taunt him and disrupt his arguments. Biden, to his credit, avoided being outwardly angry, but also gave in at times to the low-road tactics. Although, he did win major points with his die-hards when he asked a question to Trump that many had already shouted at their TV screens: “Will you shut up, man?”

I think Dana Bash, who did the post-debate analysis for CNN in the afterglow of this rhetorical dumpster fire, put it best when she called it a “shitshow.”

It certainly wasn’t a debate, given that only one candidate had any coherent description of policy. Even still, that short exchange on climate change was largely fruitless, and also fell subject to interruptions and petty backtalk. This was, of course, frustrating for those of us who wanted to see someone proudly stake a plan to save our burning planet on that stage.

But I don’t think it was pure pettiness, childish behavior or outward lying that made this debate so infuriating. While fact-checkers and armchair moderators were busy pointing out all the slights on the part of Trump, I was distracted by something else.

Trump, in his interruptions, needless digressions and unabashed willingness to lie, was a microcosmic representation of how much he breaks the rules. In this case, it wasn’t any law or unspoken social norm, but an actual rule of language governing our ability to speak with one another.

He violated the maxims of conversation, and in doing so, prevented any sort of meaningful interaction. While I doubt it was his strategy, Trump created an environment in which linguistic structure couldn’t properly function.

Let me backtrack and say that “maxims of conversation” is a legitimate phrase, and not one that I’m making up for some theory of language I’m creating. Within the field of pragmatics, which studies the contextual aspect of meaning in language, there’s a handful of these rules that underlie any productive speech act between people. We all know them implicitly and follow them to the best of our abilities, as they are concepts we’ve ingrained within our consciousness through everyday existence and socialization.

If you want to do a quick experiment in how important these maxims are, test out the “maxim of relation” with someone nearby; when talking with them, give responses that have nothing to do with what they say. Watch how fast things grind to a halt or become contentious, or for that matter, how much you hate doing it!

We don’t adhere to these rules with constant, total uniformity, since speech acts aren’t always the same. You’ll likely break the “maxim of manner,” which is about orderly behavior, when you argue with someone or feel like they’re breaking another rule and aren’t worth listening to. In any case, breaking these rules has a snowball effect, and if one person eschews a rule, then there is little hope for recovery without a total reset.

So, when people talk about how terrible the debate was, how neither candidate performed well and that someone else would’ve done better, I wholeheartedly challenge them. It wasn’t the debate itself, or behavior on the part of both candidates. And without being a Biden apologist, it wasn’t specifically his fault that he was lost at times and struggled to string together coherent arguments. I really don’t think anyone else would’ve done better.

From the outset, Trump’s implicit strategy was to push aside the conversational maxims governing his discourse setting. In non-jargon terms, Trump unintentionally broke the language of the debate for 90 minutes, in turn ruining everyone else’s comprehension as outside observers. His interruptions, random attacks on irrelevant issues and lack of care for the veracity of his claims all directly violated core conversational maxims, creating a fundamental fracture in the pragmatic layer of the debate. Their speech act was incapable of progressing beyond whatever utterances Trump contributed, and those rarely compounded into anything substantial.

Even though debates hinge on argumentation, at the end of the day, they are still a conversation between two politicians. These conversations are fairly important, as they should, in theory, reveal their policy ideas and priorities. If the conversation gets away from issues, it can also inform us how they behave in a rhetorical setting, and what we can expect of them as political representatives.

That can’t happen, though, if the participants and observers are locked into a speech setting without rules. This is what we were faced with, and this is why it was difficult at times to describe what exactly happened on that stage. We were at a loss for words because we were passive viewers of an interaction that, from the beginning, lacked any potential for cogency.

I think it’s easy for us to forget just how crucial language is for our political goals. Without it, we can’t meaningfully express our plans or identities, which would eliminate much of our productivity as political beings. And while it’s not breaking news that Trump really doesn’t care about the rules, some of them are more practically relevant than others.

We can’t equivocate about what happened last Tuesday. Trump instigated the disregard for the rules fundamental to an effective conversation. Biden was pretty much just dragged along for a long, logically defeating and mentally exhausting ride. Representing the debate as though Trump and Biden were equal accomplices in undermining it confuses things even further.

The debate may have been a two-player game, but when one kid kicks the board and swallows the pieces, you can’t really blame the other kid who came to play.