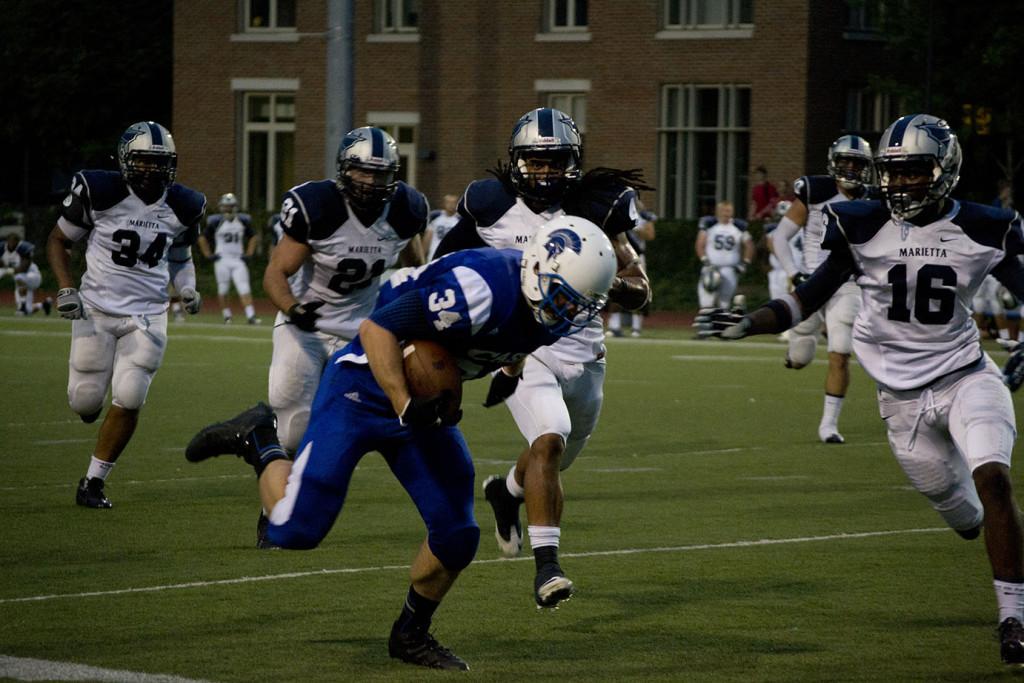 Kenny Riordan pushes ahead versus Marietta College in the season opener.

In his senior season, Kenny Riordan was an offensive leader for Case Western’s football team on the ground. Riordan was named UAA offensive player of the week during the season and then to the UAA All Conference Team, capping a great career as the Spartans’ running back.

Following a rough start to the season, Riordan helped rally the team to a 4-1 finish. Following many big wins and tough losses, the Spartans buckled down to finish strong and play to their true capability. That was strongly in part to Riordan’s rushing. “I think what stood out most was how we bounced back in the second half of the season,” Riordan said, “We won our last game which is a nice way to go out. It was good to see the team respond like that and not give up on the season.”

Riordan was a captain this season and knows that his leadership was tested. He took a two-pronged approach to leading, both verbally and through his personal action. In working with the other senior leaders Riordan was able to lead the team to another winning season, capped by an Academic Bowl win over Carnegie Mellon in the last game of the season.

A few key games were some of Riordan’s favorites. Both the first game of the year on Sept. 7th against Marietta and then the Oct. 26th game against Trinity stand out. “The Marietta game has to be one of my favorite games,” said Riordan, “It’s always nice to start a season with a big win at home. The Trinity game was a just a fun game to play in. It was exciting the whole way through, and both sides of the ball played exceptionally well. We were able to beat a good team, which really got us rolling through the second half of the season.”

Riordan will be graduating in the spring with a degree in Biomedical Engineering. He points to learning time management to being able to balance both Biomedical Engineering and Football, but also realizes the harsh reality of being an athlete. “So much of your time is dedicated to football, it’s sometimes tough to find the motivation to get your school work done after practices or while travelling. But no one comes to Case to just play football, and the coaching staff knows this, so you could always find sometime to get your work done.” Said Riordan, “As fun as football is, school always has to come first. ”

With Riordan and the other leaving seniors setting out a strong foundation and moving on, the Spartans will look to follow their examples. The team is ready to attempt to emulate their success. Riordan did leave some advice on how to prepare for each game. “I’m not really one of those big ‘get hyped’ guys. I would relax in the locker room, stay loose, try not to stress too much,” Riordan said. “I think it’s important to realize that football is a fun game to play, and you shouldn’t ever take it too seriously. When you play loose and have fun is when you play your best. “