Sabbasani: How to police the police 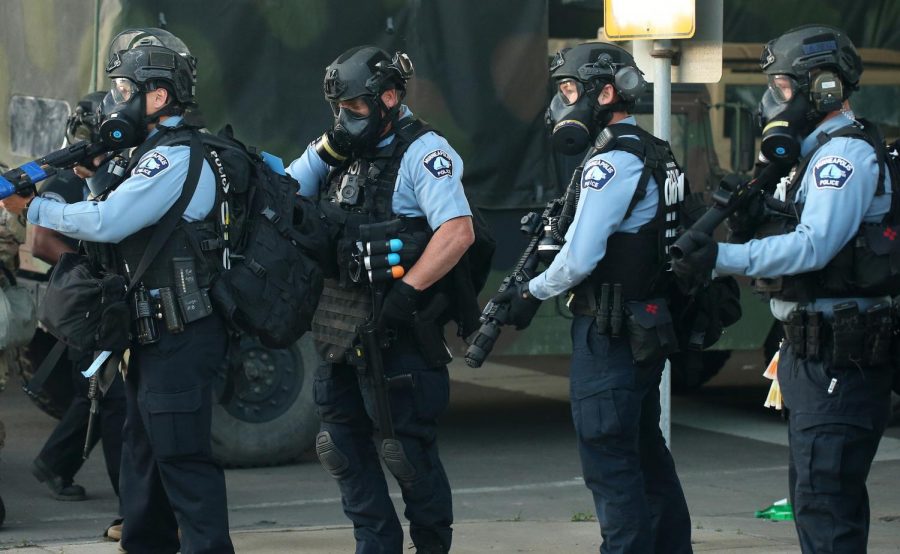 Minneapolis police officers armed to the teeth face off against protesters.

At 9 p.m. on Sept. 29, 2020, the first debate of the upcoming presidential election occurred on Case Western Reserve University’s campus. There was some excitement that a historical event of this scale was happening on the grounds of CWRU, but preceding the time of the debate, a peaceful protest of hundreds of individuals was ongoing around the Health Education Campus and Wade Oval. Students participated in order to voice their opinions during the heated political environment. However, every second there was a looming presence watching each and every one of the protesters: the police.

Prior to pledging to host the debate, the university faced many problematic and horrendous issues such as racism towards students and faculty, sexual misconduct and much more. Students have shared their experiences publicly, informed administrators about the ongoing hurdles students are facing on campus and demanded action. However, it remains evident to many students that appropriate action has not been taken by administrators. In fact, it seems as if all efforts by students have gone unnoticed.

One specific issue prevalent in the CWRU community is policing. CWRU is a heavily patrolled area, monitored by five departments: CWRU campus police, East Cleveland police, Cleveland Heights police, University Circle police and Cleveland police. Many students feel uncomfortable due to this over-policing and have stated that decreasing police presence on campus would make them feel safer. Instead, attention shifted towards organizing a national debate, which discussed many issues that were present on campus, only further perpetuating students’ anger towards administration.

While CWRU’s Chief of Police, Jay Hodge, was unavailable for an interview, the university commented on debate policing saying, “we will have additional police and security officers on campus Monday and Tuesday…No Secret Service agents will be stationed on the university campus.” During the week of the debate, there was a surge of police presence on and around campus, with some even reporting Secret Service sightings.

Second-year Krisjon Spring believes it is necessary to have a large police presence for such a prominent event, but he also proclaimed that “this could evoke fear and add on to an already shaky situation.” Second-year Kaitlyn Reyes confesses that “[increased policing] does not make her feel safe and puts the community at risk.” Spring and Reyes’ comments were further validated by a ProPublica investigation that reported students and members of the community being stopped for unwarranted reasons.

Though the presidential debate has now passed, there is still the same standing issue of over-policing on CWRU’s campus. The increased presence not only evokes fear for students, but also the residents of the surrounding area.

Delaney Jones, CWRU graduate and a Neighborhood Conflict Resolution group member, discussed the various interactions between residents of the local community and the police. Members of nearby neighborhoods have expressed concerns that police officers are treating them unfairly on campus. In fact, many residents, predominantly Black, are stopped at sight on campus. This situation also occurs to Black students as well. Jones added that during her senior year there was a horrifying incident of another student getting shot during a robbery. After that event, Jones proclaimed the rhetoric to “protect campus” has changed and targeted residents, making them feel even more unwelcome on campus.

Some of the raised concerns with the over-policing on campus—which was only exacerbated during the debate—could be alleviated by adopting alternative approaches to policing. Jones and her colleagues of the Neighborhood Conflict Resolution group have constructed several tentative ideas. First, she stated “engagement between police and various student groups can help foster change and break down barriers.” In fact, this solution could establish an understanding between the divergent student and police officer perspectives. This method has been previously used in Glenville—a neighboring community to CWRU—where local residents shadowed police officers in their day-to-day activities; they ended up developing a collaborative relationship.

While many students’ discomfort with policing is not new, it requires new measures and more attention so that the university may better support students and local residents. Many students have suggested that if police officers and students both evaluate their personal biases and establish a clear line of communication, there could be improvement to this escalating situation nationwide.