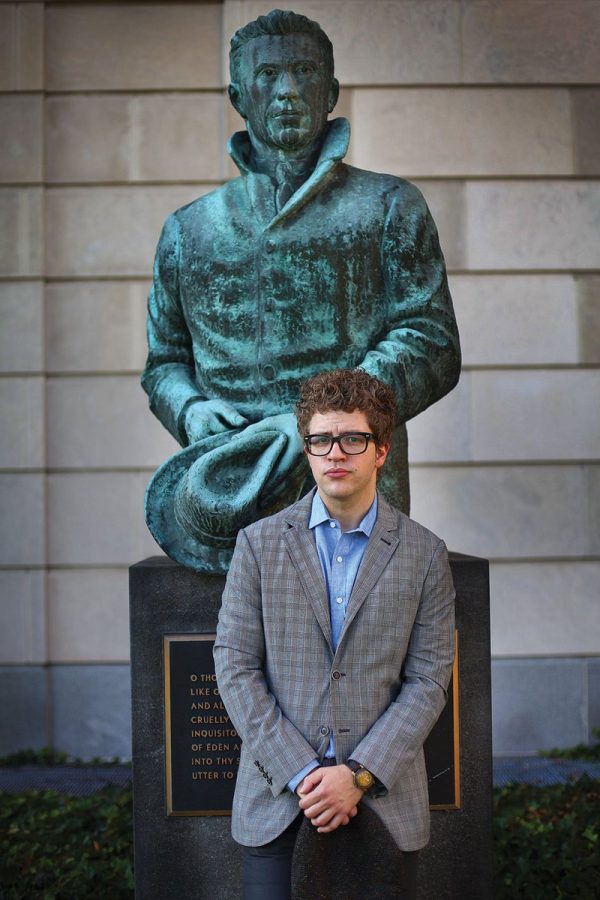 Dave Lucas standing with a statue of Cleveland poet Hart Crane behind the Kelvin Smith Library. The Poet Laureate cites this as one of his favorite spots on campus.

SAGES fellow, lecturer and poet Dave Lucas has recently been appointed as the Ohio Poet Laureate, the second poet in the state to ever hold the title. As Laureate, for a two-year term, Lucas hopes to help Ohioans understand the importance of poetry in spoken language, culture and other aspects of everyday life.

“I want to use this position to do some of the things my SAGES course does, which includes making people aware of the poetic elements in various aspects of our own language,” he said. “Because poems on a page can often be intimidating, it’s important to remember we use poetic gestures all the time.”

The Poet Laureate’s official responsibilities include at least 10 statewide appearances in both urban and rural settings, emphasizing and educating people on the value of poetry and creative expression. While Ohio established the position just three years ago, 45 other states also have a standing laureate. According to its mission statement, “The Ohio Poet Laureate has the opportunity to foster the art of poetry, encourage literacy and learning, address central issues relating to the humanities and heritage and encourage the reading and writing of poetry across the state.”

However, Lucas also plans on using the position as an opportunity to develop as a poet and as an Ohioan.

“There are more than a hundred languages spoken in Ohio, and those languages give you a sense of who developed this state’s poetic cultures,” he said. “Right now, I don’t know what kind of poetry is being written or spoken in many of those specific communities, but poetry is such a universal culture and I’m interested to learn about it.”

His Laureate itinerary includes a diverse group of settings, including schools, prisons and book clubs. Lucas emphasizes, however, the importance of exposing poetry to young audiences, who, he believes, “need it the most.” Among his poetic inspirations as a teenager, he said, included rappers like Tupac, Biggie Smalls and Lauryn Hill.

“Without rap, I don’t think I’d be here as a poet,” he said. “I listened to a lot of hip hop, and at the same time, I was starting to read poems at school. As a Clevelander listening to Bone Thugs-n-Harmony with all this apocalyptic imagery, it seems to me that both [reading poetry and listening to hip hop] were working on me, an angsty teenager.”

Lucas’ passion for educating young people began well before his employment at CWRU. Before his SAGES course, Lucas taught English at Gilmour Academy, a Catholic school outside Cleveland. He also taught during graduate school at the University of Michigan, where he wrote a poetry column for the student publication The Michigan Daily.

“I didn’t know I wanted to be a teacher until I started teaching,” he said. “One of the pleasures of teaching is being consistently surprised by what students have to say.”

Outside the classroom, Lucas’ poetry itself is widely successful. His poetry book, “Weather,” has added to his many accolades, including the 2012 Ohioana Book Award for Poetry, the 2016 Cleveland Arts Prize Emerging Artist Award, Creative Workforce Fellowship, Cuyahoga County Community Partnership for Arts and Culture and the 2005 Discovery/The Nation Prize. Additionally, he holds the title of 2016 Baker-Nord Center for the Humanities Faculty Affiliate.

Lucas is currently working on a poetic manuscript, and plans to publish more poetry in the near future.

“Writing is such an isolated activity, but the communities surrounding poetry are often very intense,” he said. “One thing I realize now is how little I actually know about poetic culture within the state of Ohio, so this is a great position to be in; it’s a chance to grow.”

Lucas’ SAGES course highlights the idea that poetry manifests itself in unexpected forms and its definition is extremely broad. After Bob Dylan won the Nobel Prize in Literature, Lucas was excited because he thought it would spark conversations similar to those he develops in his class.

He said, “I hope he wins it in economics next year.”