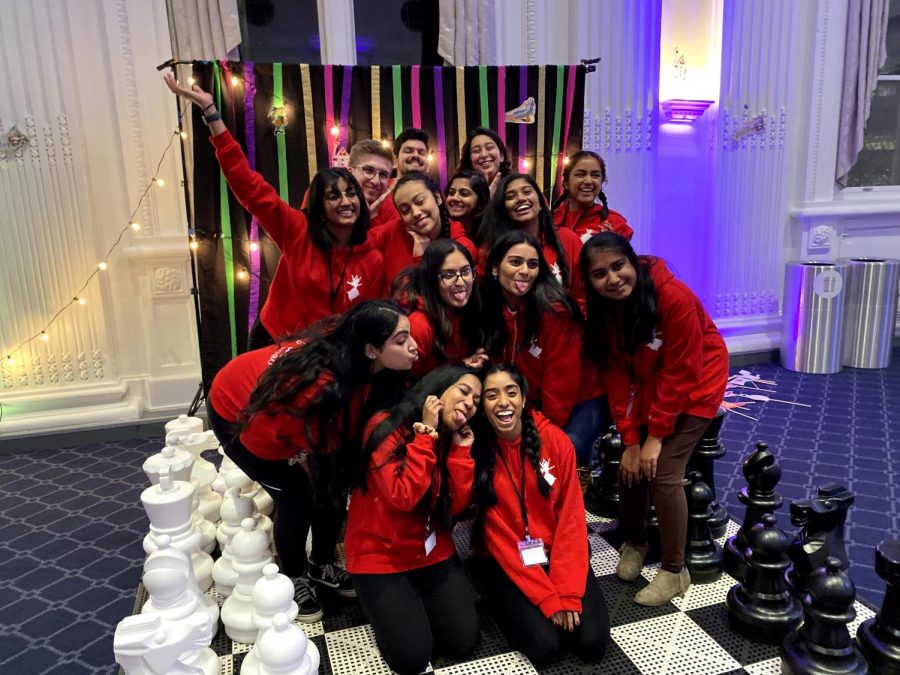 The executive board of Samāsana at a mixer with all competing teams the night before the competition.

The eight teams, from the 20-30 teams who applied, gathered in the Cleveland Museum of Art, in its Gartner Auditorium, from 5 to 9 p.m., a large amount for a competition that was officially founded on May 18 of last year as a 501(c)(3) non-profit organization.

This was an achievable feat, as classical Indian dance teams in the college circuit apply through the Classical Common Application in the fall. Similar to the college admissions process, teams can apply to competitions with a single application, which is a much easier process than most other collegiate dance team competition applications.

All members of the executive board review applications, including an audition video. This year’s topic was a story that has existed within mythology or a contemporary piece. With this broad topic in mind, Ek Taal did a routine discussing the dowry system, featuring a woman’s troubles after she gets married.

Since its establishment less than nine months ago, Samāsana has hosted other fundraisers as well, including a Chipotle fundraiser on Oct. 9, a Chit-Chat & Chai snack fundraiser on Dec. 6, a weeklong dares fundraiser the last week of January and a GoFundMe page.

Still, last Saturday’s competition was its biggest event, all of the proceeds from which go to Empowering Youth, Exploring Justice (EYEJ).

“The two sides of Samāsana’s mission, as an organizational entity, are to support cultural awareness [through] classical Indian dance and also to give back to the local Cleveland community,” Jampanaboyana said. “So we’re partnered with a local organization, EYEJ.”

Jampanaboyana explained that they had looked into other organizations to see if they could do something independently, but ultimately decided on EYEJ because of its focus on educating youth.

Samāsana kicked off with a showcase featuring CWRU organizations like Nritya, Raas and Dhamakapella. EYEJ Director Mai Moore also spoke during intermission. Finally, visiting teams created a one- to one-and-a-half-minute introductory video to help explain their topics, followed by a six- to eight-minute routine.

Although the event took place at Gartner, other venues were briefly considered, like the Mimi Ohio Theatre in Playhouse Square. However, the acoustics, capacity and proximity to campus made Gartner a more suitable location.

Jampanaboyana estimates between 100 and 200 spectators attended the event, a turnout that may have been skewed by the number of other programs that night, including CWRUcio’s Yule Ball. Members of Bhangra were also at Ohio State University for a fusion dance competition.

Results of Samāsana will go towards another first, the Origins Championship. Other competitions that qualify for the championship include Navarasa at North Carolina State University, which occurred on Jan. 18, and upcoming competitions Hasini at UTD, Mayuri at UMD, Tu Bhi Nachie at George Mason University, Laasya at UC-Berkeley and Suhasini at UCLA.

To cap off a successful event, Samāsana hosted an afterparty at ABC Tavern, and Origins representative Sri Kodali even DJ’d the event.

The Origins Championship will be hosted on April 11 in Houston, Texas.