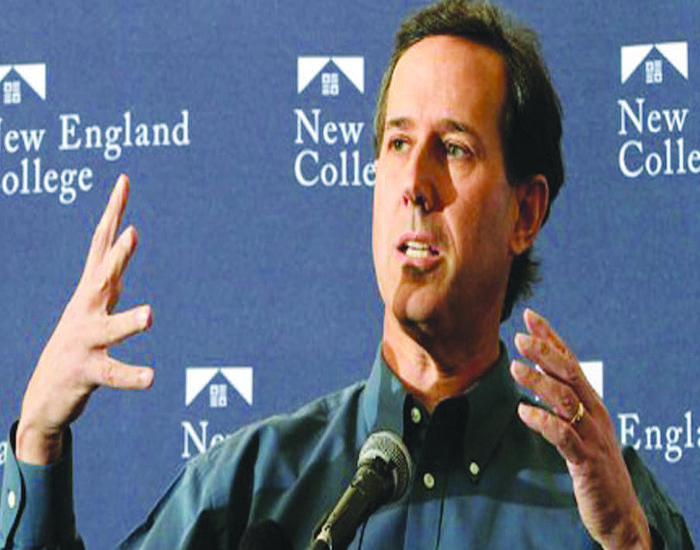 David Hatten, A Tip of the Hat

For the past two weeks Rick Santorum has been on an upward climb: he swept the primaries on Tuesday, Feb. 7 and has been riding that momentum ever since. All this progress has come despite a string of increasingly inflammatory, controversial, and concerning statements that Santorum has uttered since then. The sheer insanity that comes out of his mouth is enough to kill anyone’s chances at getting through the primaries, but he’s projected to do well in Ohio, and possibly even win. Either these voters aren’t listening, or they agree with things that are uninformed and just plain wrong.

Let’s all imagine a world a few years in the future when we’re all graduated, working, and married. Imagine you and your spouse are going to conceive a child – how magical! In the months leading up to the birth, you go to the doctor several times for as much prenatal care as possible. Did you know that care isn’t meant to keep you safe? It’s also not meant to discover possible problems with the pregnancy. No – according to Rick Santorum, you’re getting those tests in preparation for an abortion. This weekend, Rick Santorum told a crowd of people that the prenatal care outlined in “ObamaCare” is a plot to make everyone in the country have more abortions. No one can say “Show me your birth certificate” in public anymore; it looks like they’re trying out new anti-Obama catchphrases and talking points that they can just recite without thinking.

Santorum is going to make sure his children are homeschooled when (and if) he gets to the White House. That’s fine; there is nothing innately wrong with homeschool. Hopefully he means to hire a teacher, because the idea that the President and First Lady can dedicate six hours a day to teaching their children is laughable. However, with this assertion came the statement that the federal government should not be running schools, comparing the public education system to the 20th-century factory system. Santorum said the federally controlled education system was anachronistic, and Republicans in general have been discussing changes that would strip federal education requirements while funding state and local governments to run their own schools. If you want to see our country fracture, there is no better way than to remove federal standards of education and replace them with a state-centric system. Right now, students in Rhode Island learn mostly the same content as students in Texas. Give states that much power over their own education and before long many will begin pruning away the facts they don’t like. It’s bad enough as it is, but imagine a world 10 years after the federal education system is gutted and power is put in states’ hands. Imagine how the Civil War is going to be taught in different parts of the country. How long before southern states start institutionalizing the concept of “The War of Northern Aggression?” A shift in power down to the state level will cause severe long-term problems for our country, and is a strangely libertarian view for someone running as a conservative for the GOP nomination.

Santorum is a joke and the GOP is the punch line, should he get the nomination. The aforementioned are only two examples of the kind of statements Santorum is wont to make. He is controversial, inflammatory, and more often than not, incorrect. Santorum’s continued existence in our political world is only making it look like some reality television show lampooning our system of government. Our government is not here for entertainment. If we want politicians to be ridiculous we should give them their own reality television show: “Big Brother: Santorum Edition.”