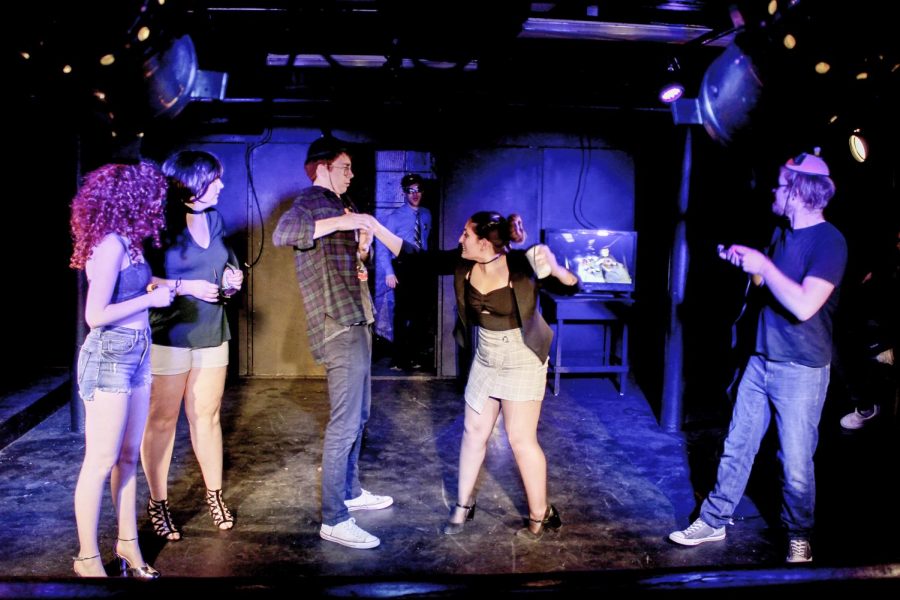 Players' Theatre Group's "The Dead Guy" ran last weekend, March 23 and 24 for two shows, one of which was attended by the playwright.

If you had a million dollars and only one week to live, what would you do? In Players’ Theatre Group (PTG)’s production of “The Dead Guy,” Eldon Phelps (Will Erickson), a narrow-minded town loser, faces a tough decision.

Phelps is on a reality show that will give him one million dollars to do anything he has ever dreamed of … if he promises to die in a week. The audience follows Phelps, Gina Yaweth, the producer (Nicole Coury) and Dougie, the cameraman (Adam Steel) on Phelps’ twisted one-week journey.

The PTG production took place in the Eldred Black Box Theater on March 23 and 24, and the cast also included Tatjana Vujovic as Christie and Woman #1, Sarah Parr as Roberta Phelps and Nancy, Shannon Foran as Sheila and Woman #2 and Jack Routhier as Virgil, Leon and the Security Guard. (Sarah Parr is The Observer’s Social Media Editor).

In his last week of his life, Phelps seeks family forgiveness, a new chance at romance and a way to make things right in the world. At the same time, he also picks up prostitutes at Disneyland, almost gets arrested and purchases a private jet and new pickup trucks. Despite all the poor choices Phelps makes, viewers empathize with him because of the extreme circumstances of the TV show and the imminence of his death.

PTG had a little less time than normal to prepare for this show compared to their previous productions.

“It was stressful not having access to all the actors,” said Caedmon Mills, first-year student and first-time director. “Coury and Erickson were preoccupied with ‘The 39 Steps’ [a PTG production earlier this month], so rehearsals with the full cast only started two weeks ago.”

Mills was also concerned that spring break would negatively affect the cast because of the extended time spent apart. However, he admits that the cast did a great job developing their characters during the week-long hiatus.

Rehearsals were nonetheless intense, especially after students returned from spring break, and ran from 7 p.m. to midnight, Monday through Friday. These rehearsals consisted of more than just running through lines; the technology of the show was very ambitious and was carefully choreographed.

“Although the script states that the television screens were optional, we felt it really enhanced the effect of the show and worked the set around them,” said lighting designer Johnathan Sequeria.

The cast also did an incredible job in the rather confined area, acting literally inches from the audience, which filled the room.

“This wasn’t my first time being in Eldred Black Box, but it was surprising to see how the troupe utilized every inch of the space,” said third-year student Nick Whalen. ”It was truly an impressive performance.”

Playwright Eric Coble, who attended the show on Friday, agreed.

Coble posted on his Facebook page that “one of the joys of being a playwright is … witnessing how different physical spaces and audiences make the play mean different things.” He called the show “electric.”

Despite the irregular schedule and difficulties, the dedication from the cast and production staff of “The Dead Guy” definitely paid off.