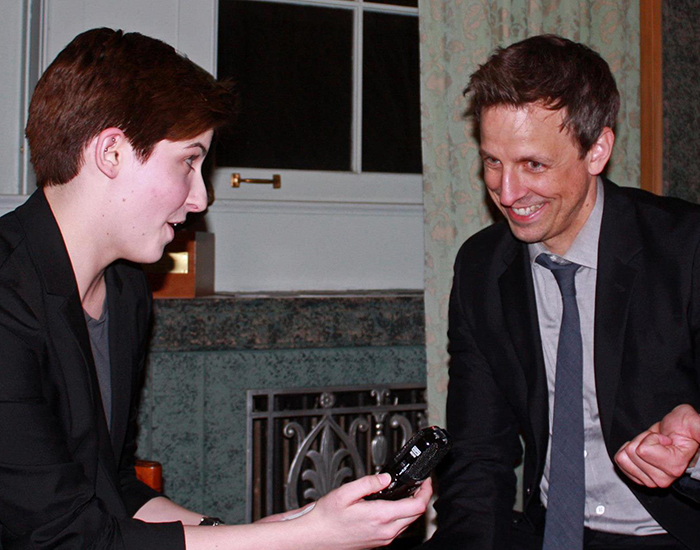 The lobby of Severance Hall filled as 8:00 p.m. approached this past Tuesday. Case Western Reserve University students, community members, and families joined together to watch Colin Jost and Seth Meyers perform—not on the television screen.

Every spring, the University Program Board brings one of the biggest names in comedy to campus.

“I’ve seen [Meyers’] stand up before,” said sophomore Matt Drezdzon. “It’s unique and a nice break from other comedians out there.”
Excited fans took their seats in the elaborate performance hall. Where they would usually enjoy some Chopin or Tchaikovsky, all expected a night of laughter.

Jost walked on stage promptly to an initially lukewarm audience. However, his jokes on voter turn outs in developing countries and driving around Cleveland brought many to life. A line on how comedy writers must have voted for Mitt Romney had laughter reverberating through the hall.

Although his set was much appreciated, many in the audience did not know who Jost was before the performance. Jost was not mentioned on the event’s Facebook page or in UPB’s weekly emails.

After 30 minutes, the co-header writer introduced his counterpart to much admiration from the audience. In a suit straight out of Weekend Update, Meyers quickly related to the audience by making references to the college-aged crowd. Sex on futons, pushily inquisitive girlfriends, and accessibility to pornography now versus when he was growing up make young and old laugh and applaud, only able to agree that these were laughable matters.

“What makes standup funny is how able the audience relates to what the comedian is talking about,” said senior Aaditya Vishwanath. “I know from experience that my girlfriend [always asks me what I’m thinking] as well.”

Meyers then delved into the two universally touchy subjects: religion and politics.

“I feel like a lot of his jokes were anti-Republican,” said Vishwanath. Mitt Romney took a couple hits for the team throughout both sets.

The headliner’s jokes about recent pedophile cases in the Catholic Church brought about the one of two notably uncomfortable moments. He reacted by saying that he did not know whether the joke would go well but he had to trudge through anyways.
Although the sets were obviously meant for the stage, the two performers more often use their comedic skills to write NBC’s Emmy Award-winning late night sketch comedy show.

“There’s no time to procrastinate,” said Meyers after the performance in an interview exclusive to The Observer. “We have to create material for 90 minutes every week. There’s a definite deadline we have to meet.”

But Jost and Meyers do not just write for themselves, performing on stage. They have to accommodate to all of SNL cast’s styles, which can be a challenge. “It’s a huge gift to be able to write for such varied styles,” said Meyers. But writing for hosts that do not have comedic experience can “bring a perspective [the writers] didn’t think of. They might ask a question that sparks a new way to look at what we’re writing.”

Through his 11 years of working on the show, Meyers said that the introduction of digital shorts in 2005 transformed the show the most. But some aspects of the show remain the same, such as not breaking character during a skit.

“I’ve only learned how to laugh when the camera’s on Stefon,” said Meyers in reference to the popular Weekend Update guest. “It’s too hard not to laugh.”