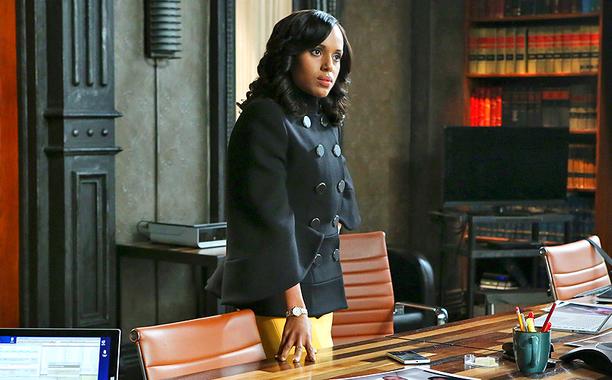 Thursday’s are officially the best day of the week again, with Shonda Rhimes’ triumvirate of twisty, turny, soapy dramas once again gracing our TV screens after an all-too-long midseason hiatus. The anchor of the trio, “Scandal,” pulled out all the stops in its return, using a six-month time jump from the breakup of power couple Olivia (Kerry Washington) and Fitz (Tony Goldwyn) to rush the storyline past Fitz’s probable ice cream break-up binges and on to the political intrigue and power grabs that drew viewers into the show in the first place.

Power is clearly going to be a theme in this upcoming season, a fact that was thrust into viewer’s faces by the use of segments from Sally Langston’s (Kate Burton) “Liberty Report” at the beginning and end of the episode. While I have enjoyed using Langston as a frame in the past, here it felt a bit like the show was trying to thrust it down our throats, especially considering that Langston was never used or mentioned in the episode in any other way.

Still, power as a theme will be very interesting for the show to explore as explicitly as it seems to be planning to be. Throughout the series, Olivia’s power has seemed to rely increasingly on her relationship with Fitz; even though she is an incredibly intelligent, resourceful woman, she has been defined by America by her relationship with a man. This, for me, was one of the most disturbing and worrisome parts about the first half of season five. Olivia Pope does not need a man to help her, she can do it on her own, and it made me upset that “Scandal” seemed to have forgotten that.

Since she and Fitz are over, now, though, Olivia might just be ready to become an even more powerful version of season one Olivia, relearning how to get things done with just her Gladiators, not the power of the White House, behind her. The events of the midseason premiere seemed to be the sharp wake-up call she needed. While Rowan (Joe Morton) attempted to make it clear to Olivia that she is nothing without her relationship with the president, if I know Olivia Pope, she’s not going to go running back to the president with her tail between her legs like her father wants her to. I hope she’s going to take this as a challenge and prove that she can do it without him.

One president who I could get behind Olivia working with, though, would be Mellie (Bellamy Young). It’s been clear since the beginning that Mellie would be a better president than Fitz. Rather than spend her time worrying about her latest crush, Mellie would be able to get things done if she won the Oval, and with Olivia Pope behind her, she’s got a good chance of getting there. #MellieForPresident: get it trending, everyone.

Elsewhere, Jake (Scott Foley), who is now sleeping with Olivia again, has been appointed director of the NSA by Fitz after lying, cheating and murdering his way to the top. While the episode would lead us to believe that he did this because he is still under the thumb of Rowan, I hope he has his own alternative plan to use some of his new-found power for himself.

Meanwhile, the other Gladiators tangentially helped Olivia with her case, which seems to be the position they’ve been relegated too all season following the escalation of their boss’ relationship with the president. Hopefully, they’ll be given something more to do now that Pope and Associates is back in action. If the Gladiators can get involved again and Olivia can get back to being her badass self, “Scandal” might be looking at an excellent string of episodes.

Airs: Thursday’s at 9 pm on ABC