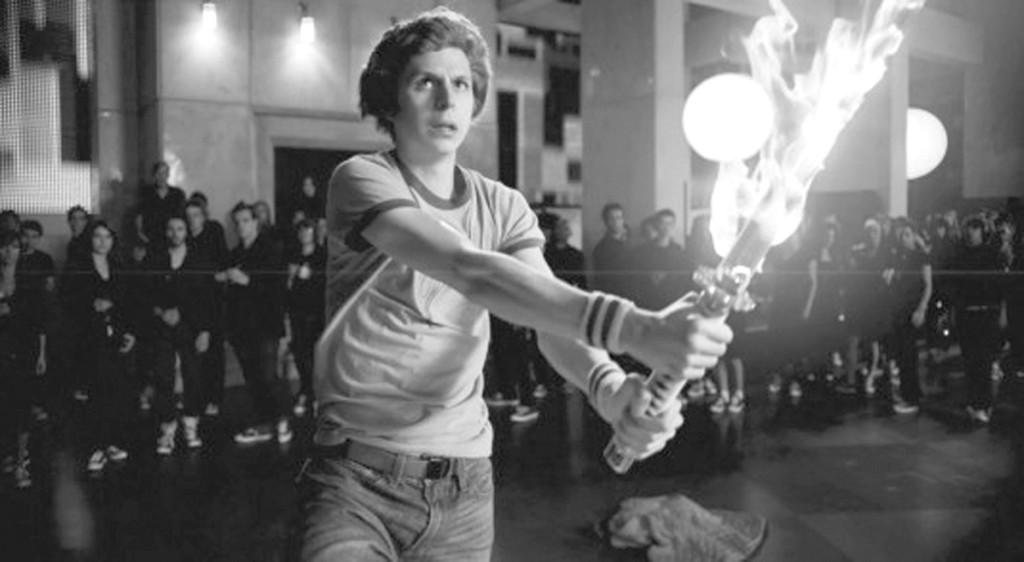 Scott Pilgrim vs. The World is the story of the eponymous 23-year old veteran video gamer, amateur rocker, and Canadian slacker who encounters the seemingly-magical girl of his dreams, Ramona Flowers, and must secure their relationship the only way he could possibly comprehend – by defeating all seven of her ex-boyfriends in epic battles. Directed by Edgar Wright, the mastermind behind hit movies Shaun of the Dead and Hot Fuzz, the film is adapted from a series of graphic novels created by Canadian cartoonist Bryan Lee O’Malley.

The graphic novel series has been acclaimed for its silly, surrealist, rapid-fire humor and references to various aspects of nerd culture. It also offers an endearing Canadian slice-of-life, highlighting various Toronto landmarks and activities typical of young adults in the city. Barring a few confusing and completely nonsensical plot developments that require some intense suspension of disbelief, the story develops the mostly-unlikeable characters into ones readers can care about and culminates in a rather heartwarming ending. Unfortunately, most of these qualities did not survive the transition to the big screen.

The film, starring a clueless and emotionally bankrupt Michael Cera as Scott Pilgrim, strips the original story of its tact and character development, and progresses with awkward teenage drama at lightning pace, leaving behind any notion of actual romance, evidence that you should care about any of the characters, or reasons that any of the characters should care about each other. A lot of the dialogue is ripped verbatim from the books, but is presented at such an unnaturally rapid pace that the feelings don’t have a chance to sink in. It is simply awkward and likely to have the viewer tugging at the collar of their shirt or forming some sort of turtle with their hands.

Gone are the majority of references and scenes that take the viewer to the wonderful land of Toronto, with the exceptions of the blatant statement that the film takes place in that city, as well as a single visit to Pizza Pizza, Canada’s major pizza chain restaurant. Gone are the more clever and accurate geeky gaming references in exchange for gimmicky tack-ons that lead the more astute to believe that the screenwriter has never really played a video game, or the less astute to solidify their opinion that such activities remain synonymous with the word “loser.” Subdued are the supporting characters that add depth to Scott’s world and backstory.

To be fair, it is quite difficult to cram over one thousand pages of storyboard material into less than two hours of real-time footage, however much more useful details, events, and especially dialogue could have and should have been gleaned from the source.

Fortunately, the strong cast, also consisting of Jason Schwartzman as antagonist Gideon Graves and Kieran Culkin as Scott’s homosexual roommate, benefactor, and comic foil Wallace Wells, allows a great deal of the humor to remain intact, providing some good laughs throughout the film. The visually appealing special effects and action sequences are also top notch, with cinematography provided by Bill Pope, the man behind the lens of the action-packed Matrix series, as well as nicely implemented animations and animated sequences used to portray flashbacks, onomatopoeia, and other character expressions.

However, this really isn’t enough to save this film from its awkward execution. Bias toward the source material aside, the story is about the relationship between Scott and Ramona, which just kind of happens without convincing the viewer that Ramona even cares about Scott at all, or why Scott should be risking his many lives to fight through all these evil exes for her in the first place. It’s the core of the story, but in this movie it is basically absent. There are a lot of cool-looking fights, a few genuinely funny jokes and one-liners, dazzling special effects, and straight up rocking out, but then there’s a lot of fast talking, whiny and annoying drama, and a lack of support for the story’s entire premise.

Even without reading the graphic novels on which the film is based, one could easily imagine how perplexed the average viewer would be emerging from the theater if they weren’t taken in by all the mindless gimmicks. When it’s not uncomfortable, it’s entertaining and fun to look at, but it really doesn’t make any sense at all.