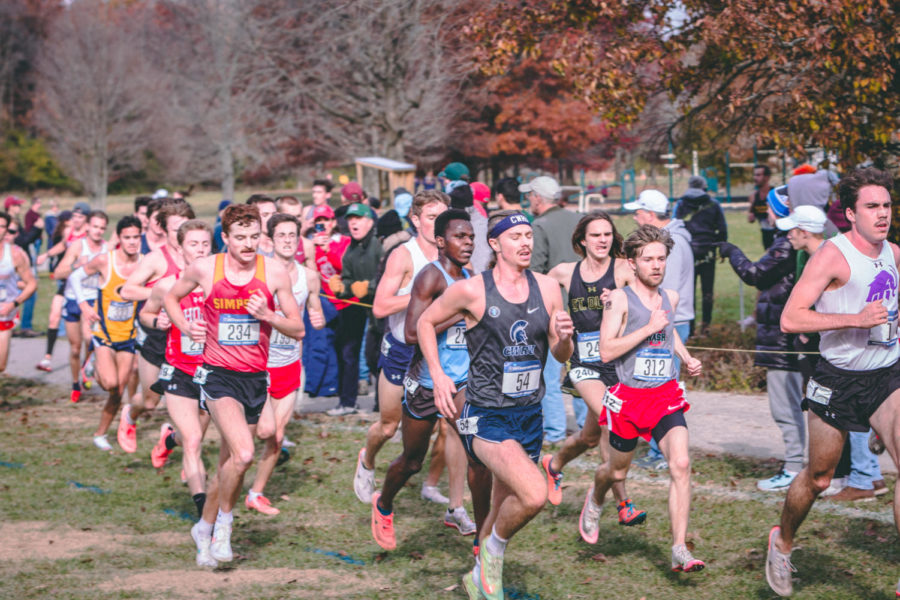 Fourth-year Trey Razanauskas (54), finishes 45th in the nation at the 2021 NCAA Division III Championship, setting a new record for CWRU.

Pomona-Pitzer won the team championship with a score of 18, Massachusetts Institute of Technology came in second with a score of 112 and Williams College placed third with 167 points. John Carroll University’s Alex Phillip won the individual championship after completing the 8K distance in 23:27.6.

The women’s team notched a 25th place finish out of 32 teams with 583 points. This was the first time the Spartans competed in the competition since 2010 and only the sixth time in team history. Fourth-year Jana Fisher led CWRU with a 51st place finish out of 292 runners. She finished the 6K race in 21:58.3, her new personal record. Fourth-year Susanna Henry came in 93rd at a career best of 22:25.0. Fourth-year Julia Kocherzat took 154th place after finishing in 22:48.7, also a career best. Third-year Catherine Phillips finished 214th at 23:15.8 while second-year Jessica Kwasny placed 252nd in 23:36.0.

Johns Hopkins University claimed the team championship with 130 points, Claremont-Mudd-Scripps took second place with 132 points and State University of New York at Geneseo came in third with 168 points. Loras College’s Kassie Rosenbaum won the individual championship with a time of 20:11.1.

Just as the semester winds down, the men’s and women’s track and field teams will be ramping up to host the eighth annual CWRU Spartan Holiday Classic on Saturday, Dec. 4 at the Veale Center Indoor Track.

The upcoming competition is highly anticipated, especially among the newer members of the squad.

“It’s a very young team, so there is that energy and eagerness with many of them to get their feet wet in competition,” said head coach of 10 years Eric Schmuhl in an interview with the CWRU Athletic Department. “Most have been training very diligently since August together and making meaningful and measurable improvements. Indoor is very different from outdoor and with not having it since February 2020, people are excited for that atmosphere again and a chance to put up some benchmark performances before the winter holiday.”

Although there are no team captains, there are multiple returnees who can help set the tone for the season. Logan Singer, who just wrapped up his cross country season, is set to begin his fourth season with the team after earning All-UAA honors at the 2020 UAA Indoor Championship. Singer holds CWRU’s 1-mile record with a time of 4:13.03, improving upon the previous record by more than five seconds. Singer also set CWRU’s 1,000-meter record at 2:29.04, more than three seconds better than his previous record of 2:32.43. Fourth-year Juan Perez is also returning for his final season. He set the school’s 55-meter dash record in the 2019-2020 season with a time of 6.57.

For the women’s team, third-year Mia Vargo is set to build on her success at the 2020 UAA Indoor Championship, where she placed second in the high jump with a 1.64-meter mark and claimed an All-UAA honor. Third-years Mia Kilroy and Melissa Phung will also be returning after setting the women’s 4×400-meter record at the 2020 championship with a time of 4:02.99, besting the previous time of 4:05.56. Former Spartans Julie Hines and Kemi Ogundiran were also part of that relay team.

The Spartans will conclude the fall semester at Youngstown State University on Friday, Dec. 10, before resuming their season at the Dave Lehman Invite in Westerville, Ohio on Saturday, Jan. 22.