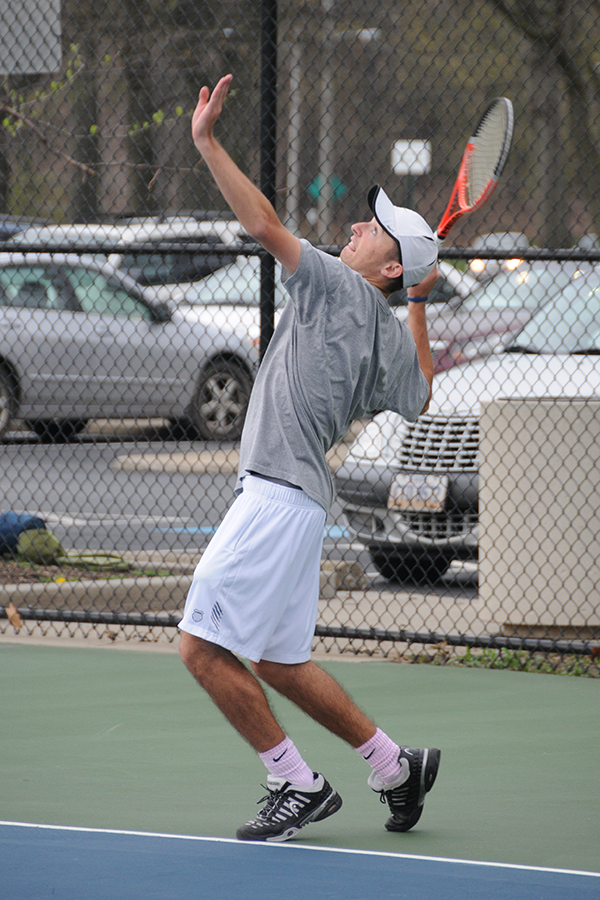 Sophomore Will Drougas looks to make another big impact at the UAA Championship where he became the first Spartan named Rookie of the Year in program history.

The No. 13 nationally-ranked Case Western Reserve University men’s tennis team has learned that it will enter the upcoming University Athletic Association Championship as the No. 2 seed and play seventh-seeded New York University at 9 a.m. Friday, Apr. 26, at Sanlando Park.

The Spartans (19-5), also ranked second in the Intercollegiate Tennis Association Central Region, have reached as high as No. 7 in the nation this spring – the best ranking in school history.

The team will now try to turn in the best UAA performance in program history after tying their top finish last spring. The Spartans were seeded fourth during the 2012 UAA Championship and upset then No. 2 seed Carnegie Mellon University by a score of 6-3 in the third-place match.

Leading the Spartans into this year’s championship is freshman Christopher Krimbill with an overall singles record of 22-9. Ranked 11th in the ITA Central Region, Krimbill is 6-5 in the No. 1 singles slot, 6-1 at No. 2, and 3-0 at No. 3.

Also seeing time in the top spot, sophomore Will Drougas is 21-11 with a 6-5 mark at No. 1 and a 7-3 record at No. 2. Ranked 15th in the region, Drougas became the first player in team history last season to be named UAA Rookie of the Year. Later in the spring, Drougas was the first CWRU player since 1977 to compete at the NCAA Championship Tournament.

In doubles, the No. 1 tandem of junior John Healey and senior Nicolas Howe are ranked second in the region with a 7-4 mark.
Gerber and Krimbill, ranked 11th in the region, are 12-2 overall and 9-2 at No. 2.

Seniors Richard Brunsting and Alex Solove are 15-6 overall with a 6-5 mark at No. 3.

The championship matches are set for Sunday, April 28.