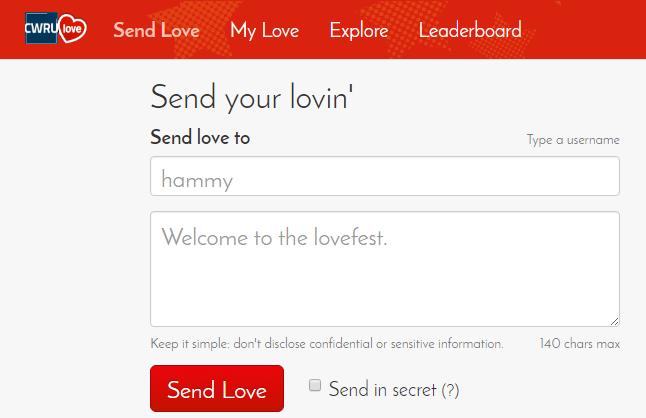 After a summer internship at Yelp, Graduate student Stephen Brennan built the website "CWRU Love," modeled after "Yelp Love." "CWRU Love" allows users to send electronic thank you notes to others and share their appreciation.

In the spirit of appreciation and love, Case Western Reserve University’s Hacker Society launched a web service called “CWRU Love.” The service allows anyone at CWRU to send a message to each other in no more than 140 characters.

“CWRU Love” is a customized version of Yelp Love, a web application where Yelp employees can send quick thank you notes to their colleagues. According to the Yelp blog, Yelp Love was first created out of a Hackathon project in 2013 and since then has been used by Yelp employees to express their appreciation for each other.

On Valentine’s Day this year, Yelp made the application’s source code freely available for redistribution and modification. Fourth-year student, Stephen Brennan, took advantage of this opportunity and developed “CWRU Love.”

Brennan had an internship at Yelp in the summer of 2016. During his internship, Brennan noticed that in the workplace, people interrupted each other a lot to ask questions; however a “thank you” at the end of a conversation was not sincere enough to show their appreciation. Instead, Brennan thought taking extra time to send a personal message might do the trick.

“CWRU Love is one of the sort of things that allows everyone to express that they appreciate it when you go out of your way to help [them]”, said Brennan, “It’s somewhere between thank you and a card.”

First-year student Sarah Chen was one of the most active users the first week after CWRU Love was up and running. She found out about CWRU Love when she received a message from one of her friends.

“It was a Monday, and I was surprised at how the short and sweet message made me feel so much more hopeful about the upcoming week,” said Chen. “At that point I realized that I had other people whose Mondays I wanted to make better in the same way my friend made mine brighter.”

Brennan is still working to make “CWRU Love” more student friendly. He is working on a way to reward the student the receives and the one that sends the most messages for that week. Brennan is very excited that people who he doesn’t know personally are making use of CWRU Love and sending nice things to other people.

“Maybe this could be an Internet thing for campus that has a positive impact.” he said.
“It all really only happened because my one friend took the time to write a heartfelt message to me,” said Chen. “I think this entire thing with CWRU Love is a very literal demonstration that gratitude is contagious and expressing your appreciation in small increments is easier and more important than you’d think