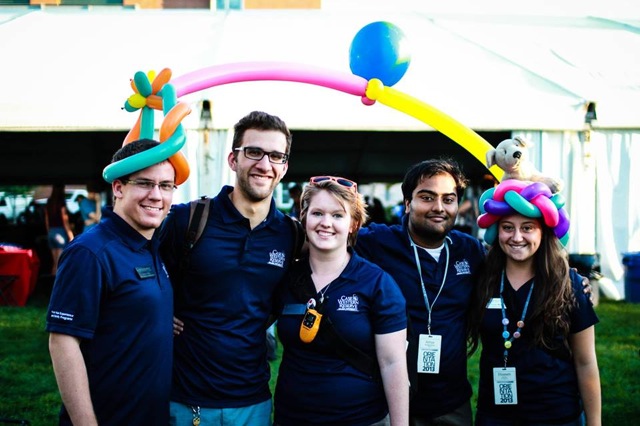 The Student Leadership Journey Council (SLJC) recognizes and awards the Orientation Executive Board for their leadership skills and their success with Orientation 2013.

Through hard work and dedication, they strived to provide new students and their families a warm welcome and smooth transition into the Case Western Reserve University community.

Below, several commonly asked questions are answered about the Executive Board based in an interview with faculty mentor Amanda McCarthy.

Q: Are there different leadership styles within the executive board? Were they more similar or different?
A: According to McCarthy, each member was chosen to bring something different to the board. She noted that everyone responds best to a different leadership style and she kept that in mind while deciding who to hire. McCarthy appreciated that leaders learn and grow from each other and strove to achieve diversity in the group in order to promote this.

Q: Orientation Leaders are known to be especially close, how is that established?
A: McCarthy believes the closeness often seen between orientation leaders comes from the team-building focus of the spring training program and retreats. This focus and goal promotes confidence in the Orientation Leaders, including the EBoard. Even though they are newly selected, the Executive Board members do have extra responsibilities during the training, including facilitating activities and working with office personnel. They are looked upon as experienced leaders and role models by the Orientation Leaders.

Q: What was the biggest challenge for the Executive Board and how was it overcome?
A: To McCarthy, it seems that most years the board faces a similar problem. They do not comprehend what is required of them before they actually begin to do it. She sees the members having difficulties when the realization of their many responsibilities hits them, but she also sees the “light bulb moment” when they each ascertain why they are working so hard. She believes the passion and love they each have for what they are doing pushes them through the tough times and makes all the hard work worth it in the end.

Q: How does being on the board influence the members as leaders?
A: After working with multiple boards, McCarthy is able to observe that the members come from very different backgrounds to work together and become a team that strives for a common goal. She enjoys watching the members hold on to their experience on the board and take with them what they learned, and applying it to their future undertakings.